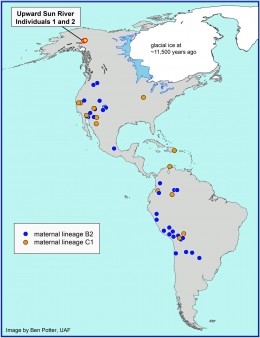 This map shows the location of the Upward Sun River site in Alaska where the remains of two infants, Upward Sun River individuals 1 and 2, were found in an 11,500-year-old burial. A new University of Utah analysis shows the infants belong to two genetic groups or lineages known as B2 and C1. The maps shows other Native American groups throughout the Americas that are part of the same lineages. Credit: Ben Potter, University of Alaska Fairbanks.
- +
Listen by Archaeology Newsroom
27 10 '15 11:38

DNA links many Native Americans to infants in Alaskan grave