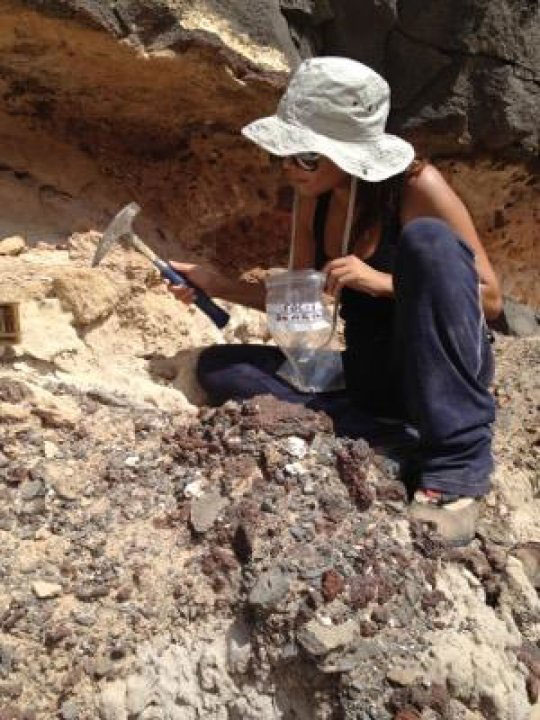 Switch from hunting and gathering to agriculture

Snails have been hailed as nutritious delicacies, providing early humans with part of their healthy diet for thousands of years. But more recently, the shells left behind by pre-historic snails are providing scientists with clues to ancient environmental conditions.

Existing research tells us that during the Holocene period (last 11,500 years) personal lifestyles changed from strictly hunting and gathering to the beginning of agricultural food production. But why?

New findings from University of Cincinnati geologist Yurena Yanes suggest that natural climate change that occurred seven to six thousand years ago warmed the environment and enhanced the conditions for growing enough agriculture to help sustain the growing human population.

As part of a new project looking at snail shells from Northeastern Morocco, Yanes, assistant professor of geology in UC’s McMicken College of Arts and Sciences, analyzed oxygen isotope samples from the ancient shells. What she has observed is clear evidence for significant climate change in that area that accounts for the introduction of early agricultural development in Northwest Africa.

In a multi-collaborative effort with two researchers in Germany – Rainer Hutterer from Zoologisches Forschungsmuseum and Jörg Linstädter from the Institute of Prehistoric Archaeology, University of Cologne – Yanes looked at shells collected from an archaeological site in Northeast Morocco dated from 10,800 to 6,700 years old. They analyzed the oxygen isotope values of archaeological shells and were able to calculate the sea surface temperatures from when the original human occupants living in the region began to shift their cultural practices.

History climbs out of its shell

“Even though previous research has not observed major climate change at that temporal transition at the study site, with the oxygen isotope analysis of these shells, we have evidence for a significant natural climate change,” says Yanes.

“Because the isotopes of snail shells are only influenced by temperature and water conditions and not by humans, we have natural archives at the time of prehistoric occupation.”

Yanes postulates that some groups of humans may have migrated there, but even the occupants living there initially may have shifted their substantive cultural strategies. She adds that at a time before there was any food production, people likely did not feel the need to produce food because they were able to sustain themselves by hunting and collecting.

“But there was evidence for a change and something triggered that transition from hunting to farming and agriculture.”

Yanes says scientists continue to hypothesize that increasing human population density during this transition necessitated finding new ways to feed the population. Moreover, with the changing climate from cooler to warmer, the conditions were ripe, so to speak, for growing optimal crops and agriculture.

The results of Yanes’ study can now document the time of the early agricultural development in Northeast Africa to the Holocene period, but she also notes that as a time strongly associated with natural climate change.

By continuing her analysis of ancient and modern shell isotope values, Yanes plans to look deeper into the relationship between how people affected their environment then as compared to how people are affecting their environment and atmosphere now, based on how climate is changing and why.

Because this part of the world has been minimally investigated, Yanes hopes to expand this project and write an NSF proposal once they finalize the publication. She also hopes to incorporate additional archaeological sites in Northwest Africa on a broader regional scale in that region.