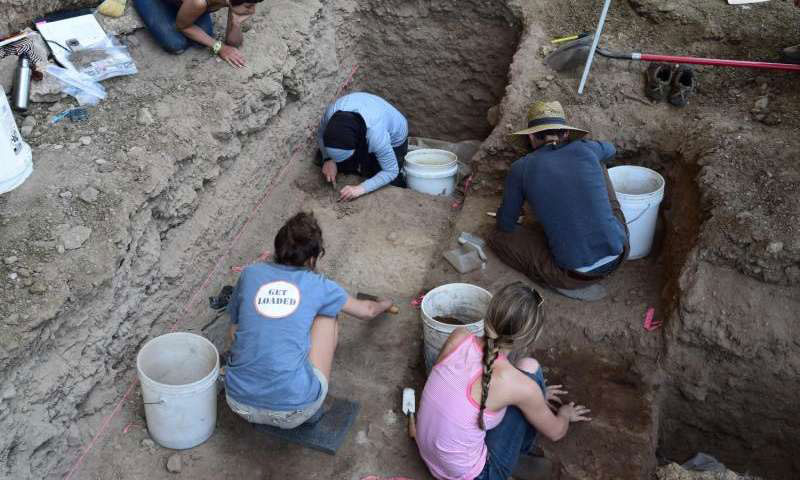 Prehistoric human populations of hunter-gatherers in a region of North America grew at the same rate as farming societies in Europe, according to a new radiocarbon analysis involving researchers from the University of Wyoming and the Harvard-Smithsonian Center for Astrophysics.

The findings challenge the commonly held view that the advent of agriculture 10,000-12,000 years ago accelerated human population growth. The research is reported this week in the Proceedings of the National Academy of Sciences, a major scientific journal.

“Our analysis shows that transitioning farming societies experienced the same rate of growth as contemporaneous foraging societies,” says Robert Kelly, University of Wyoming professor of anthropology and co-author of the PNAS paper. “The same rate of growth measured for populations dwelling in a range of environments, and practicing a variety of subsistence strategies, suggests that the global climate and/or other biological factors —not adaptability to local environment or subsistence practices— regulated long-term growth of the human population for most of the past 12,000 years.”

The lead author of the paper is Jabran Zahid of the Harvard-Smithsonian Center for Astrophysics in Cambridge, Mass. Erick Robinson, post-doctoral researcher in the University of Wyoming’s Department of Anthropology, also participated in the research.

While the world’s human population currently grows at an average rate of 1 percent per year, earlier research has shown that long-term growth of the prehistoric human population beginning at the end of the Ice Age was just 0.04 percent annually. That held true until about 200 years ago, when a number of factors led to higher growth rates.

For their research, the UW and Harvard-Smithsonian scientists analyzed radiocarbon dates from Wyoming and Colorado that were recovered predominantly from charcoal hearths, which provide a direct record of prehistoric human activity.

For humans in the region that is now Wyoming and Colorado between 6,000 and 13,000 years ago — people who foraged on animals and plants to survive — the analysis showed a long-term annual growth rate of 0.041 percent, consistent with growth that took place throughout North America. During that same period, European societies were farming or transitioning to agriculture, yet the growth rate there was essentially the same.

“The introduction of agriculture cannot be directly linked to an increase in the long-term annual rate of population growth,” the researchers wrote.

In general, similar rates of growth — around 0.04 percent — were measured for prehistoric human populations across a broad range of geographies and climates, the scientists say. “This similarity in growth rates suggests that prehistoric humans effectively adapted to their surroundings such that region-specific environmental pressure was not the primary mechanism regulating long-term population growth.”

Instead, the factors that controlled long-term population growth during that period likely were global in nature, such as climate change or biological factors affecting all humans, such as disease.

While concluding that population growth held steady overall at about 0.04 percent annually for thousands of years, the paper acknowledges that there were short-term fluctuations in human growth rates in certain regions lasting from a few hundred to 1,000 years. The authors suggest further statistical analysis of radiocarbon dates of human remains to study the mechanisms regulating population growth.