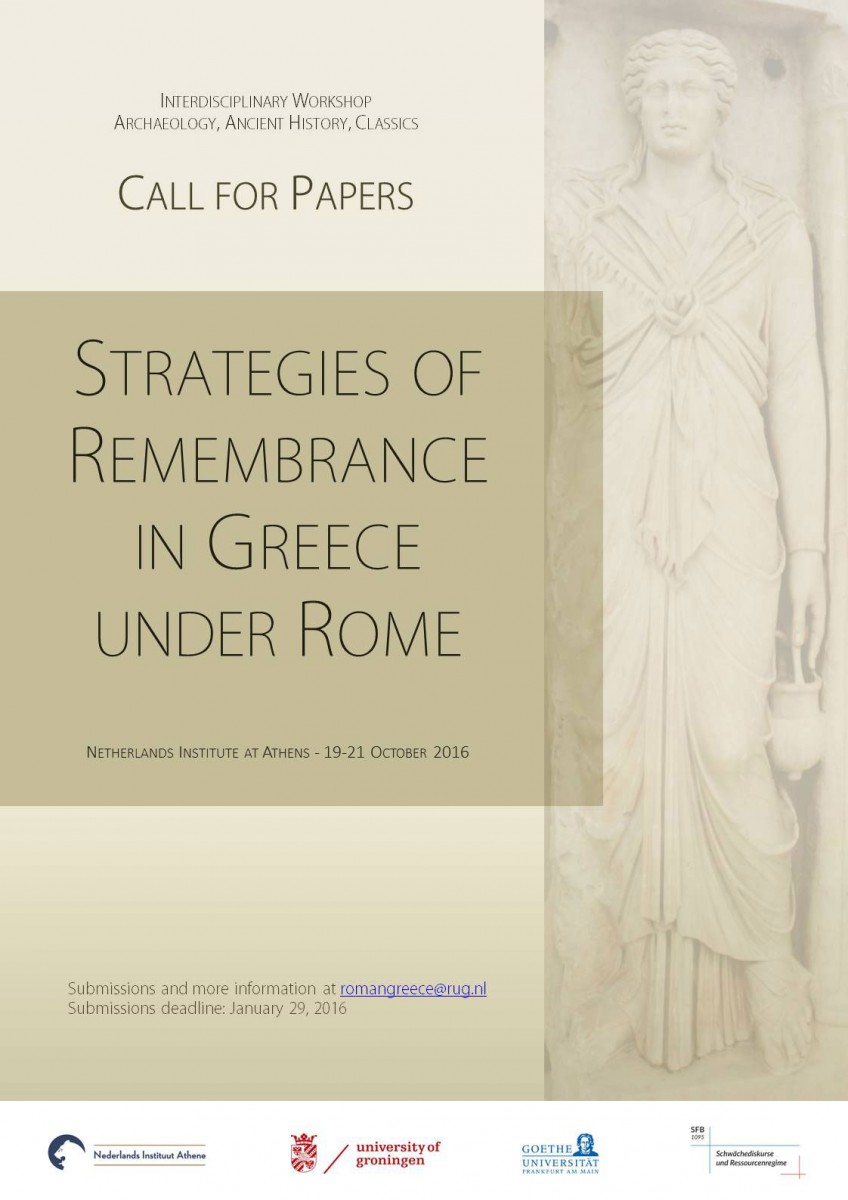 Strategies of Remembrance in Greece under Rome

The University of Groningen, the Goethe-Universität Frankfurt and the Netherlands Institute at Athens (NIA) organize an international conference entitled “Strategies of Remembrance in Greece under Rome”, which will take place on 19-21 October 2016.

In ancient and modern narratives alike, Roman Greece is often described as a shadow of its glorious past, and as a place of powerlessness and passivity. Indeed, the cities of Greece underwent radical transformations in the centuries following the Classical era: Macedonian rule and Roman hegemony both had important implications for the political power and autonomy of the Greek cities and its citizens. The significant political changes were marked by outbursts of violence, humanitarian crises, as well as increased contacts with Rome and the wider Mediterranean world. Both communities and individuals were forced to navigate these circumstances, and ultimately carve a new position in the Roman world. In this context, the invaluable resource of the past, be it real or imagined, constituted a powerful tool for self-definition and the construction of (private or communal) public images. As a result, strategies of remembrance played a key role in this process of adaptation.

These are various examples of people who sought to anchor the Roman present in the Greek past, ranging from explicit use of the admired old Greece to sublte negotiations between tradition and innovation. Cities prided themselves in their ancient, often mythical roots; the grand cities of Classical Greece – Athens, Sparta, Olympia – became popular tourist destinations, and often the recipients of acts of lavish euergetism; young students were taught the art of rhetoric through impersonations of Pericles or Socrates; and old Greek virtues were reaffirmed through the use of classicizing iconography and epigraphy. Monuments commemorating Roman victories in Greece were a very different, yet equally powerful reminder of the current state of affairs.

The aim of this collaborative workshop is to examine the ways in which communities and individuals, be they Greek or Roman, mobilized the past as a resource in the political or social arena in Greece in the 1st century BCE and the 1st century CE. Topic suggestions include:

-Architecture and city planning in the urban centres of Roman Greece

-Remembering through public and private monuments

-Tradition and innovation in religion, cults, and rituals

-The past in Imperial Greek works of literature

The workshop is based on pre-circulated papers of c. 8000 words (in English). In order to explore comparative perspectives on strategies of remembrance in Roman Greece, the Organizing Committee invites PhD-students, Post-Doctoral researchers and senior scholars from various disciplines – Archaeology, Classics, Ancient History – to send their applications. Abstracts of 300 words and a brief description of the applicant’s academic background (150 words) should be sent by January 29, 2016, to [email protected] (contact: Tamara Dijkstra, David Weidgenannt).

*The organizers regret they cannot offer travel expenses to participants. PhD students who present a paper can apply for a limited number of travel grants to cover part of their travel costs.