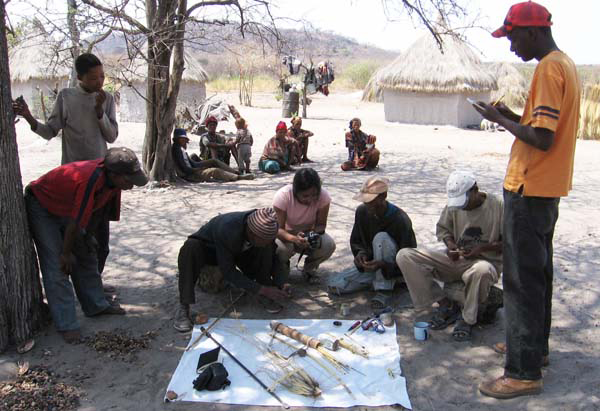 Studying the San peoples of Namibia

While academic awareness of African peoples’ hunting with poison-tipped arrows extends back for centuries, knowledge of the ingenious practice has been scattered among chemistry, entomology and anthropology texts.

Now, a comprehensive study of the hunting tradition of the San peoples of Namibia sheds new light on their use of beetle and plant poisons to boost the lethality of their arrows. The research appears currently in the peer-reviewed journal ZooKeys.

“The more slender threads of information I wove together from reports dating to the 1700s, the more obvious it became there were few sure facts and many hard-to-believe assertions,” said lead author Caroline Chaboo, assistant professor of ecology and evolutionary biology at the University of Kansas. “The San are traditional hunter-gatherers and thus have a special place in the history of man. As I learned more about the modern San, their history, weak political status and endangered languages and cultures, it became urgent to me to document this aspect of their culture.”

Chaboo and her co-authors —Megan Biesele of the Kalahari Peoples Fund, Robert K. Hitchcock of the University of New Mexico and Andrea Weeks of George Mason University— synthesized historical and anthropological literature and conducted their own fieldwork to better grasp how the San use beetle arrow poisons.

“The fieldwork was an unforgettable experience,” Chaboo said. “Taking all our water and food into the Kalahari, where water was too precious to use for baths. Sleeping in a pop-up tent atop the Range Rover and waking in the middle of the night with hyenas sniffing around the campsite; or sleeping on the ground and feeling the roar of a lion through the ground. Seeing the first amazing rains flooding the Okavango Delta. Being welcomed into the San communities, and having the entire community sit around me and the arrow preparers, and hearing San spoken.”

“Arrow-hunting appears in ancient rock-paintings of the San, but it is unclear when poisons might have been adopted,” Chaboo said. “We suspect poisons were adopted very early.”

As an entomologist specializing in leaf-beetle species, Chaboo was especially interested how the San collect beetle poison, prepare it and apply it to arrows.

“In general, the beetle larvae are harvested by digging up soil around the host, sifting out the cocoons to take home,” she said. “Later, the cocoons are cracked open and the beetle larvae extracted. Some San hunters squeeze the beetle body fluids out onto the arrowhead, or they make a concoction with other plant juices. The arrow preparer is very careful in handling all the materials and in storing the poisoned arrows and remaining cocoons away from the community.”

According to the KU researcher, the biological purpose of the poison in beetles and plants remains unclear.

“This is the next big glaring question to answer,” Chaboo said. “We can guess that this protein toxin has some physiological value to the insect, perhaps protecting it from the harsh dry climate above ground or possibly even an anti-predatory defense. These beetle larvae already have two other levels of defenses — their hard cocoons and their underground location.”

Chaboo said the poison slowly brings about paralysis in the prey of San hunters, although the biological mechanism remains unclear.

“The poison is a slow-acting paralyzing poison,” she said. “The animal continues to run after being hit, but over the next few hours, the animal becomes increasingly unable to move well, and it finally falls over. Then the hunter can finish off the animal. Cell breakdown and interference with cell membrane channels are implicated.”

Indeed, this slow chase by the hunter is the basis for the San’s famous tracking culture.

According to Chaboo, previous investigations by anthropologists have tended to work deeply with one or a few San communities. Chemists also made sporadic stabs at examining the San poisons, “but in the absence of entomologists, the identity of the poison sources has been ambiguous.”

“I became convinced that the biological systematic approach offered the most superior and swiftest route to sorting out the story,” said the KU researcher. “Systematics readily integrates data from other fields so our paper provides a comprehensive account of the anthropology, history, chemistry and taxonomy about arrow-poison beetles. It identifies some urgent questions to frame the next research steps.”

Chaboo asserted that indigenous knowledge and practice, such as San hunting traditions, promise new understanding to scientists across many disciplines.

“It’s remarkable that there is so much we still don’t know about life on Earth and even about the intricate relationships humans have with the environment,” she said. “Indigenous knowledge —accumulated over long periods of observations and experiences— holds deep insight about nature. Such knowledge can improve the quality of science and other fields and may offer resolutions to some pressing problems. For example, the San can teach us how to live better in a hotter world with diminishing drinking water.”