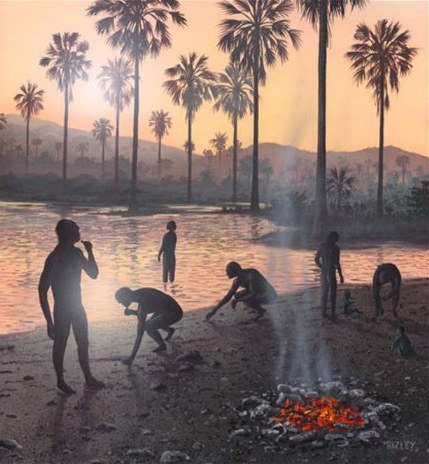 Footprints give a glimpse into early human life

In a village in northwestern Kenya

Dozens of 1.5-million-year-old human footprints in Kenya may be evidence of an early antelope hunt, offering a rare look at the lives of ancient humans, researchers reported at a conference in California last week.

Hominin footprints offer evidence about gait and foot shape, but their scarcity, combined with an inadequate hominin fossil record, hampers research on the evolution of the human gait.

In the late 2000s, researchers exploring the area near a village in northwestern Kenya, called Ileret, for human bones and tools, instead stumbled on a collection of 22 human footprints. Their 2009 publication on the discovery, in Science, entitled “Early Hominin Foot Morphology Based on 1.5-Million-Year-Old Footprints from Ileret, Kenya” focused on the anatomy of the people who left the prints: tall individuals who probably belonged to the species Homo ergaster/erectus, and who walked very much like modern humans (Homo sapiens). In their paper, the researchers concluded that “the Ileret prints show that by 1.5 Ma, hominins had evolved an essentially modern human foot function and style of bipedal locomotion.”

Now Neil Roach, a palaeoanthropologist at the American Museum of Natural History in New York, returned to Ileret with his colleagues to take a closer look at the prints and to search for more, as he thought the footprints were an opportunity to catch a glimpse in the day of a life of Homo erectus.

Roach and his colleagues presented the results of this survey at the annual meeting of the Paleoanthropology Society in San Francisco (14-15 April, 2015), in an announcement entitled “Hominin paleoecology and land use based on 1.5 Ma footprint surfaces at Ileret, Kenya”.

“What we can say is that we have a number of individuals, probably males, that are moving across a lake shore in a way that is consistent with how carnivores move,” Roach said. He and his team propose that the tracks represent group hunts for antelope or wildebeest.

Some researchers have speculated that Homo erectus turned from scavenging to hunting, as their bulging brains demanded loads of calories. But “hunting is a difficult thing to prove in human evolution,” Roach said, adding that “There’s starting to be a consensus that around 2 million years ago we see more carnivory that has to do with hunting.”

Curtis Marean, a palaeoanthropologist at Arizona State University in Tempe, thinks what Roach and his team are doing is a completely novel approach “I think it’s a really interesting way to get an angle on what communities were doing in the past.” Even if it is difficult to say whether the footprints point at a group hunt or a lakeshore foraging.

Roach and his colleagues now plan to continue their footprint study in order to get a better idea of their patterns of movement for comparison.