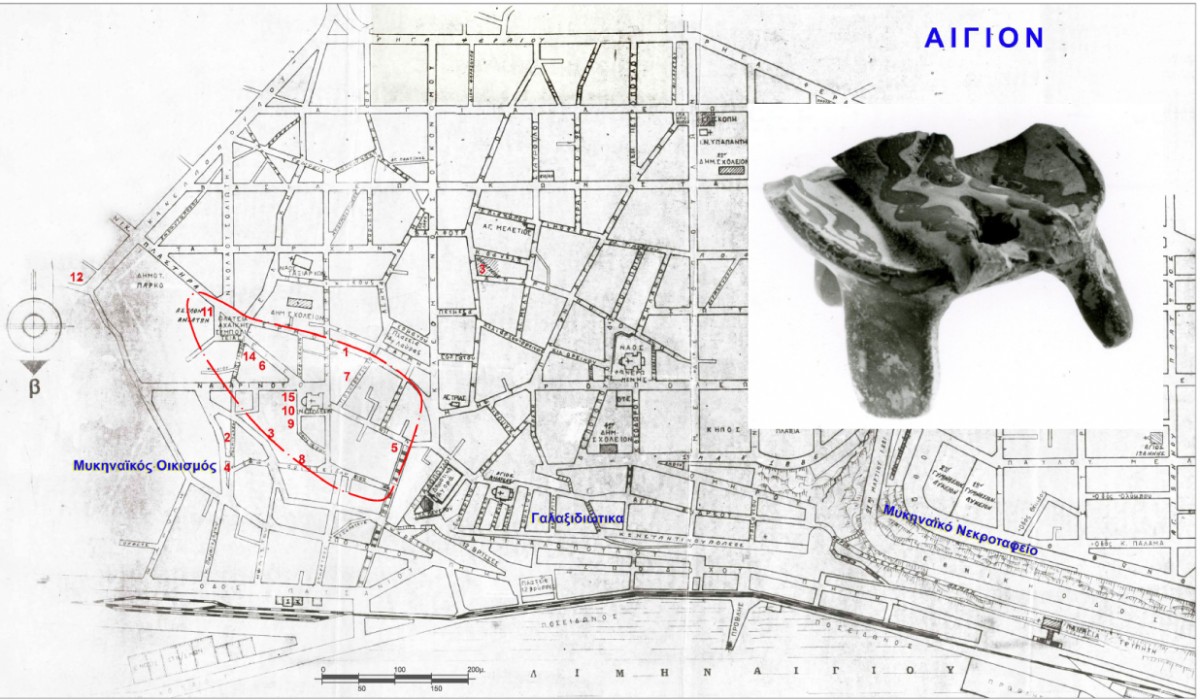 Mycenaean Aigion: The puzzle of rescue excavations in a modern city

“Rescue excavations in the city of Aigion in Achaea revealed a picture of a coastal Mycenaean settlement that fits into the same pattern as the nonpalatial settlements of Argolid and Corinthia, while some finds betray connections with Central Greece as well”, says Dr Lena Papazoglou-Manioudaki, Keeper Emerita of the Prehistoric Collection, National Archaeological Museum, Athens.

“Mycenaean Aigion: The puzzle of rescue excavations in a modern city” is the subject of her paper, to be presented at the 4th meeting of the Mycenaean Seminar, on Thursday, February 25, 2016 at 7.00 p.m., in the A. Tritsis Amphitheatre (Cultural Centre of the Municipality of Athens, Akadimias 50).

“Aigion is built on an oblong, flat hill, rising 60 m above sea level, at the western end of the long and broad seaside plain that extends all the way to Corinth,” Dr Papazoglou-Manioudaki explains. “To the north, across the sea, Aigion faces Kirrha and the roadways to Phthiotis and Thessaly, the so called Isthmus Corridor route. Westward, toward the city of Patras, the Panachaikon range separates Aigion from western Achaea, leading to different evolution processes in each area. Phenomena typical of western Achaea, like the rise of local elites and the building of tholos tombs in LH II or the large number of warrior graves in the LH IIIC period, are remarkably absent from the Aigialeia region.

“The information extrapolated from rescue excavations (some 15 in all from 1967 to 2000) determines the location and extent of the prehistoric settlement. It was located at the northeastern part of the modern city, in the old city, around the church of Eisodion. A cemetery of chamber tombs, located to the west, dates from LH IIΒ to LH IIIC.

“Aigion was inhabited since the Neolithic period. In EH II it emerges as an important centre, as attested by the architectural remains, the pottery and other finds. At the end of EH II the settlement was destroyed and was apparently not resettled until the MH II period. LH I pottery was first identified in a rectangular building that continued in use into the LH IIA period. The architectural plan was modified during the subsequent phase and a pottery assemblage marks the destruction of the site in LH IIB/IIIA1. Aigion belongs to the group of early Mycenaean settlements that were destroyed, but not necessarily abandoned, at the end of the prepalatial period. Unstratified pottery and a seated figurine add to the picture of the early Mycenaean settlement and provide evidence that Aigion remained within the commercial networks of the Northeastern Peloponnese in the palatial and postpalatial period.”