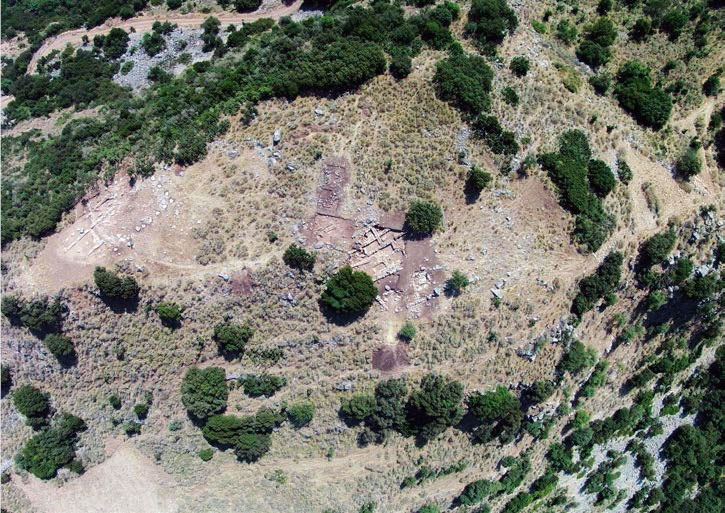 The Mycenaean settlement and the tombs on Mygdalia hill, near Patras

“The excavation on Mygdalia hill offers a unique opportunity for the investigation of the way of life of a local Mycenaean community in Achaea, in the Patras region, including both a settlement and a cemetery”. Dr Lena Papazoglou-Manioudaki, Honorary Curator in charge of the Prehistoric Collection National Archaeological Museum, will give a lecture on “The Mycenaean settlement and the tombs on Mygdalia hill, near Patras”, in the framework of the Mycenaean Seminar.

“The Mycenaean settlement on Mygdalia hill covered an area of 6,500 sq.m at the top of the hill, on three successive terraces (Terrace 1, 2, 3). From the top, there is an excellent view of the extensive, fertile plain of Patras, as far as Teichos Dymaion to the west, the Ionian islands and the coast of Aetolia, across the sea to the north.

Three areas/rooms of a large rectangular building were unearthed on Τerrace 1. The main area/room, 7,80 x 3,60 m in size, is provided with stone-built bases for the vertical supports of the roof. On the exterior, was located a destruction layer, including stones, sherds and animal bones, mostly of the LH IIIC period.

To the Archaic period belong large stone bases for four columns of the east side and eight columns of the better preserved south side of the peristasis of a Greek temple, measuring 16,50 x 7,40 m and providing evidence for an early Greek sanctuary, on the site of a Mycenaean settlement, in Western Achaea.

On Terrace 2 was excavated a densely built settlement, situated on different levels, following the slope of the hill. An intra muros cist grave was also found in an open space between buildings. A large storeroom, measuring 15 x 4,2 m, is provided with stone slabs along its long axis, for the vertical supports of the roof. The floor deposit of the final phase, of LH IIIC date, included storage vessels and domestic pottery. The pottery from Terrace 2, from the storeroom and also from houses of LH I and II date, provides an opportunity for the study of Mycenaean domestic pottery in Western Achaea.

The existence of a defensive/retaining wall, preserved for a length of at least 50 m and apparently protecting the settlement from the more accessible south side, was confirmed on Terrace 3. It dates back to the establishment of the settlement, during the Shaft Grave era at Mycenae.

The differentiation in the finds between Terraces 1 and 2 gives a first impression of an organised settlement plan. The upper terrace was intended for the house of the ruler and later for the temple of the god, a so to speak public space, while the main settlement was situated on Terraces 2 and 3.

The excavation on Mygdalia hill is still at an early stage but we already have a sense of order, an idea of the actual pattern of a settlement site. Terrace 1 houses the public sector, the ruler’s megaron and later on it is the designated place for the erection of an archaic temple, while the main settlement is located on terraces 2 and 3.

The cemetery of built cists was located on the west slope of the hill. An already looted apsidal grave of the early Mycenaean period, was discovered and excavated on the SW slope of the hill, ca. 60m from the defensive/retaining wall. On the NW slope of the same hill has been excavated a tholos tomb, 4,30m in diameter, with finds dating it to the LH IIB-IIIA1 period, at a time characterised by the emergence of local elites and the creation of local centres, which were established in Western Achaea before the palatial period. At the end of the early Mycenaean period there is upheaval, extensive looting of the tombs at the site and destruction of the grave goods inside the tholos tomb, as attested in the other tombs of Western Achaea”.

The 1st meeting of the Mycenaean Seminar will be at 19:00 in the British School at Athens, Upper House (52 Souedias st.)

Τhe lecture will be held in Greek.