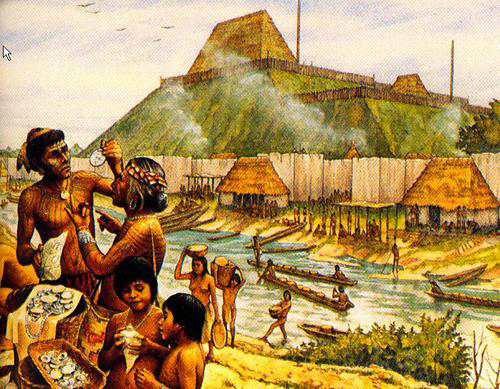 Dr. Thomas E. Emerson and Dr. Kristin M. Hedman from the Illinois State Archaeological Survey-Prairie Research Institute at the University of Illinois present a new case for Cahokia’s demise. The new theory was published in Southern Illinois University Press’ volume, Beyond Collapse: Archaeological Perspectives on Resilience, Revitalization, and Transformation in Complex Societies. Emerson and Hedman contributed a chapter to the volume entitled, “The Dangers of Diversity: The Consolidation and Dissolution of Cahokia, Native North America’s First Urban Polity”, that explores internal divisions that led to the collapse of Cahokia.

The archaeologists claim internal conflict by social, political, ethnic, and religious factions are a more reasonable description of events that led to Cahokia’s collapse than environmental causes, as is the popular theory. They present new bioarchaeological evidence that demonstrates that as many as one-third of the Cahokian residents were immigrants and that these immigrants likely represented groups that were culturally, ethnically, and perhaps linguistically distinct from local populations. Emerson clarifies further, “There is no smoking gun if you want to pin Cahokia’s dissolution on environmental factors. …It makes more sense, given the heterogeneous population with differences in language, and social, religious, and political cultures to look to internal dissension at Cahokia as the underlying reason…”

Emerson and Hedman go on to say that Cahokia does not have a clear history of significant environmental degradation that can be linked to dissolution.

“Cahokia may be an interesting example of political experiment in the unification of social and ethnic diversity that failed – probably by design.”

Letting the Past Speak

Hedman and Emerson claim the remains of the inhabitants of Cahokia have a story to tell. Archaeologists have been able to gather information about the lifestyle, diet, health and place of birth of those buried at Cahokia. This information provided vital clues in assessing factors involved in the final demise of Cahokia.

For the past 15 years, ISAS archaeologists have studied curated collections from Greater Cahokia. Evidence from osteological and isotopic analyses and radiocarbon dating was used to establish temporal and cultural context and to assess the population that once occupied the urban center of Cahokia. This newly acquired data and reevaluation of existing documentation are continuing to offer new insights about the people of Cahokia and what may have caused the demise of America’s first city.