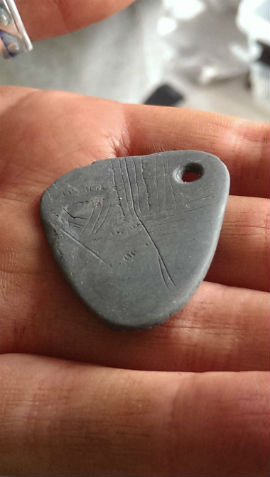 At Star Carr in North Yorkshire

An 11,000 year old engraved shale pendant discovered by archaeologists during excavations at the Early Mesolithic site at Star Carr in North Yorkshire is unique in the UK, according to new research.

The artwork on the tiny fragile pendant, uncovered by a research team from the Universities of York, Manchester and Chester, is the earliest known Mesolithic art in Britain. Crafted from a single piece of shale, the subtriangular three-millimetre thick artefact measuring 31mm by 35mm contains a series of lines which archaeologists believe may represent a tree, a map, a leaf or even tally marks.

Engraved motifs on Mesolithic pendants are extremely rare and no other engraved pendants made of shale are known in Europe.

When archaeologists uncovered the pendant last year, the lines on the surface were barely visible. The research team used a range of digital microscopy techniques to generate high resolution images to help determine the style and order of engraving. They also carried out scientific analysis to try to establish if the pendant had been strung or worn and whether pigments had been used to make the lines more prominent.

The research, which is part of a five-year project supported by the European Research Council, is published in Internet Archaeology. The research is also supported by Historic England and the Vale of Pickering Research Trust. The pendant is to be showcased to the public for the first time in a display at the Yorkshire Museum in York on 27 February until 5 May.

Star Carr is one of a number of archaeological sites around what was the location of a huge lake which covered much of the Vale of Pickering in the Mesolithic era. Researchers discovered the pendant in lake edge deposits. Initially they thought it was natural stone — the perforation was blocked by sediment and the engravings were invisible.

It is the first perforated artefact with engraved design discovered at Star Carr though shale beads, a piece of perforated amber and two perforated animal teeth have been recovered from the site previously.

Professor Nicky Milner, of the Department of Archaeology at York, led the research. She said: “It was incredibly exciting to discover such a rare object. It is unlike anything we have found in Britain from this period. We can only imagine who owned it, how they wore it and what the engravings actually meant to them.

“One possibility is that the pendant belonged to a shaman — headdresses made out of red deer antlers found nearby in earlier excavations are thought to have been worn by shamans. We can only guess what the engravings mean but engraved amber pendants found in Denmark have been interpreted as amulets used for spiritual personal protection.”

Dr Chantal Conneller, from The University of Manchester and co-director of the excavations, said: “This exciting find tells us about the art of the first permanent settlers of Britain after the last Ice Age. This was a time when sea-level was much lower than today. Groups roamed across Doggerland (land now under the North Sea) and into Britain. The designs on our pendant are similar to those found in southern Scandinavia and other areas bordering the North Sea, showing a close cultural connection between northern European groups at this time.”

Dr Barry Taylor, from the University of Chester and co-director of the excavations, said: “I love these sorts of finds because they are a real connection to people in the past. When we study prehistory we deal with very long periods of time and often focus on very broad issues. But this is something that a person wore, that had significance to them and to the people around them. These sorts of artefacts tell us about people and, after all, that’s what archaeology is all about.”

Duncan Wilson, Chief Executive of Historic England which contributed to and part-funded the excavation and research publication said: “The discovery of the pendant is a sensational find. Star Carr is an internationally important ‘at risk’ site, which is why we have provided substantial financial support for the excavation and assistance through the input of our specialist archaeological and archaeological science teams. The results have exceeded our expectations and will help rewrite the story of this long and complex, but little understood early prehistoric period.”

Natalie McCaul, curator of archaeology at the Yorkshire Museum, said: “We are thrilled to be able to showcase such a nationally significant object for the first time. Its remarkable discovery changes the way we think about our ancestors who lived in Yorkshire 11,000 years ago and the rituals, beliefs and cultural values that were part of their lives. We are excited that the rest of the collection from the excavations will come to the museum in time and we’re looking forward to preserving and displaying it for the public to enjoy.”

Researchers from the University of York’s Department of Physics and Centre for Digital Heritage, and Hull York Medical School were also involved in the analysis of the pendant.

The display at the Yorkshire Museum will also feature other Star Carr finds including flints, a rare barbed point used for hunting or fishing and 11,000 year old fire lighters — amazingly preserved birch bark rolls. These will feature alongside digital interpretation and high resolution imagery of the pendant.