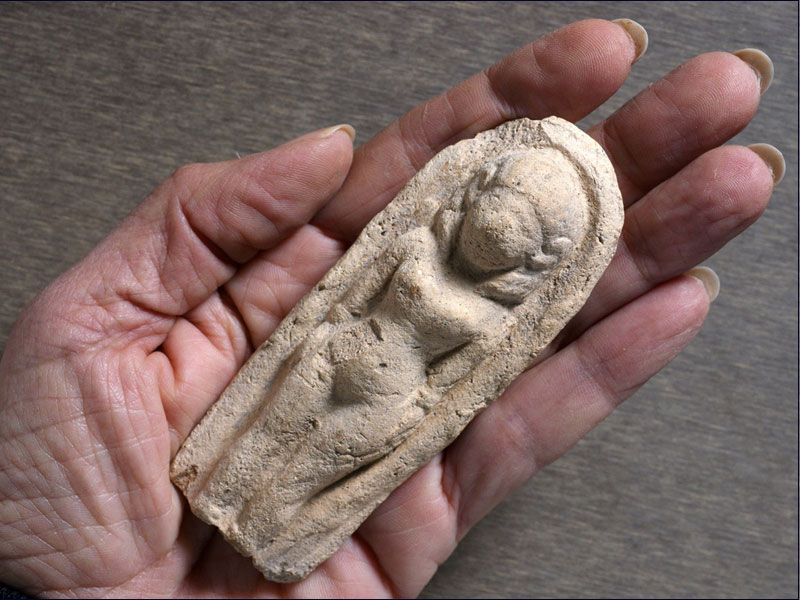 A 3,400 year old statue was recently uncovered by a 7-year-old boy while on an outing with friends. Seven year old Ori Greenhut, from the communal settlement of Tel Te’omin in the Beit Sheʽan Valley, went out on a trip earlier this week with friends, accompanied by the father of one of the children. While they were climbing up the archaeological mound at Tel Rehov, Ori came across a stone that had shifted and suddenly saw an image of a person covered with soil. Ori rubbed away the mud that adhered to the object and thus discovered the clay figurine.The find was turned over to the Israel Antiquities Authority.

The clay figurine portrays a naked standing woman which was prepared by pressing soft clay into a mold. Amihai Mazar, professor emeritus at Hebrew University and expedition director of the archaeological excavations at Tel Rehov, examined the figurine and stated, “It is typical of the Canaanite culture of the 15th-13th centuries BCE. Some researchers think the figure depicted here is that of a real flesh and blood woman, and others view her as the fertility goddess Astarte, known from Canaanite sources and from the Bible. It is highly likely that the term trafim mentioned in the Bible indeed refers to figurines of this kind”. Mazar added, “Evidently the figurine belonged to one of the residents of the city of Rehov, which was then ruled by the central government of the Egyptian pharaohs”.