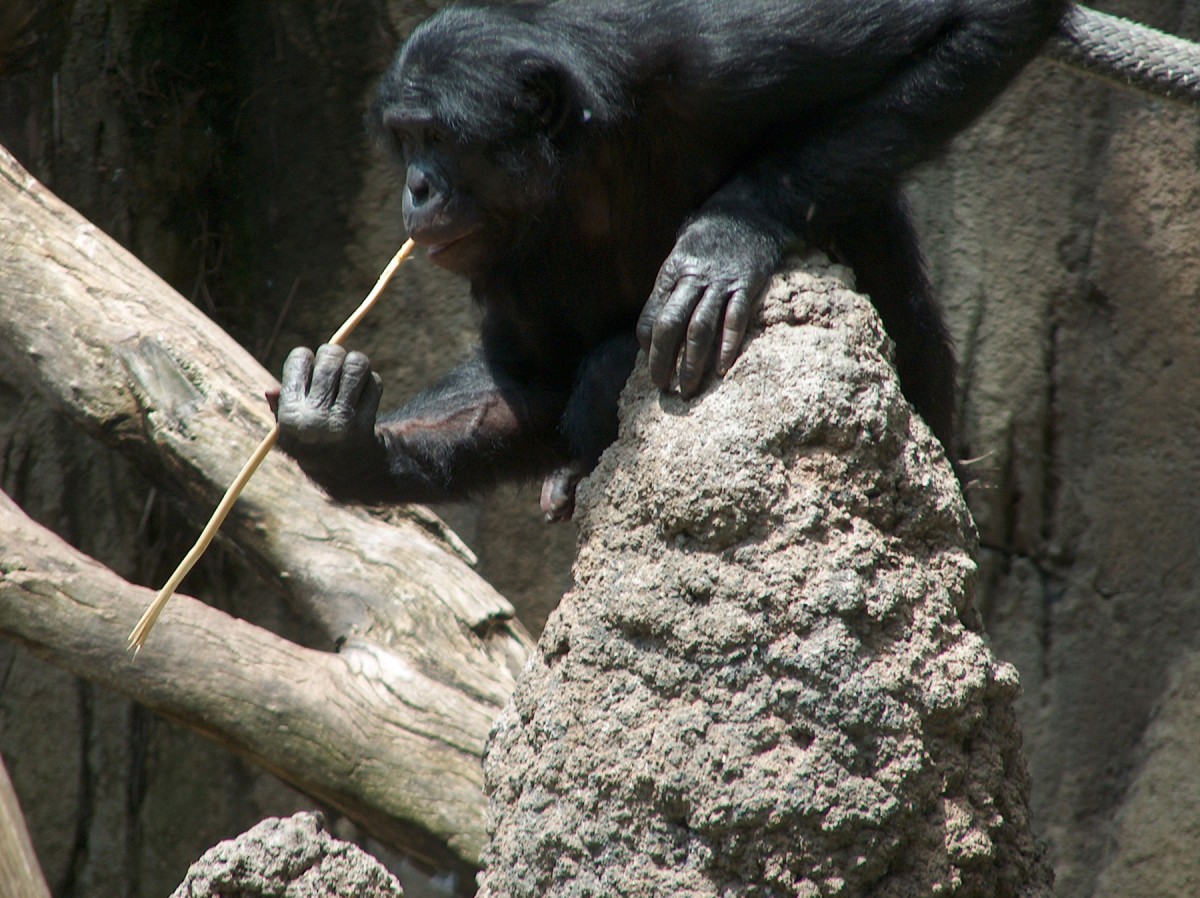 Chimpanzees often use tools to extract or consume food. Which tools they choose for which purpose, however, can differ depending on the region where they live.

Researchers of the Max Planck Institute for Evolutionary Anthropology in Leipzig, Germany, have thus initiated the “Pan African Programme: The Cultured Chimpanzee” and, since 2010, have collected data on chimpanzee behavior, demography and resource availability across Africa following a standardized protocol. This is how the researchers encountered a thus far unknown behavior: In West Africa chimpanzees throw stones at trees resulting in conspicuous accumulations at these sites. Why exactly the animals do this the researchers do not yet know, yet the behavior appears to have some cultural elements.

Chimpanzees have been studied for almost 60 years at a few long-term field sites, which are mainly located in East and West Africa. They are proficient tool-users, using sticks to fish for termites, to dip for ants, to extract honey, and even using stone or wooden hammers to crack open nuts.

Outside the foraging context male chimpanzees sometimes throw branches and stones during displays, or leaf-clip to solicit sex from females.

In an effort to overcome this limitation, researchers of the Department of Primatology at the Max Planck Institute for Evolutionary Anthropology have initiated the “Pan African Programme: The Cultured Chimpanzee” (PanAf) to better understand the ecological and evolutionary drivers of behavioral diversification in chimpanzees. Following a unique standardized protocol, data on chimpanzee behavior, demography and resource availability have been collected since 2010 at 39 different temporary research sites across Africa.

“The PanAf project represents a new approach to studying chimpanzees and will provide many interesting insights into chimpanzee demography and social structure, genetics, behavior and culture”, says Hjalmar Kuehl of the Max Planck Institute for Evolutionary Anthropology and the German Centre for Integrative Biodiversity Research. “The Pan Af is only possible due to the numerous collaborations with chimpanzee researchers, field workers and national wildlife authorities in 14 countries across Africa”. Since chimpanzees were not habituated to human presence at these sites, the researchers rely on a wide spectrum of non-invasive sampling methods, including remote camera traps.

After discovering conspicuous piles of stones next to trees at four research sites in West Africa, the field teams placed camera traps next to them. For instance, at the site of the Chimbo Foundation in Guinea Bissau some impressive videos were recorded which confirmed the researchers’ suspicion that chimpanzees were responsible for these stone piles and were regularly visiting these trees. “The PanAf cameras filmed individual chimpanzees picking up stones from beside, or inside trees, and then throwing them at these trees while emitting a long-distance pant hoot vocalization”, says Ammie Kalan of the Max Planck Institute for Evolutionary Anthropology.

Importantly, the behavior results in accumulations of rocks at these locations. Whereas it is mainly the adult males practicing this behavior in the context of ritualized displays, some camera traps also revealed females or juveniles doing it. The behavior has only been observed in West Africa and appears to be independent of any foraging context, in which the majority of tool-use behaviors were previously described in chimpanzees.

“This study reports a new chimpanzee behavior not known previously and highlights the potential of the PanAf project to uncover unknown facets of the life of chimpanzees, our closest living relative”, says Christophe Boesch, director of the Department of Primatology at the Max Planck Institute for Evolutionary Anthropology. “As the stone accumulation behavior does not seem to be linked to either the abundance of stones or the availability of suitable trees in an area, it is likely that it has some cultural elements.”

Chimpanzees are often used as a model for the evolution of early hominins. Due to the conspicuous accumulations of stones associated with this newly discovered behavior, it raises questions regarding the interpretation of stone accumulation sites in archaeology. Intriguingly, the authors also suggest that this behavior could shed some light on the origin of ritual sites in hominin evolution.