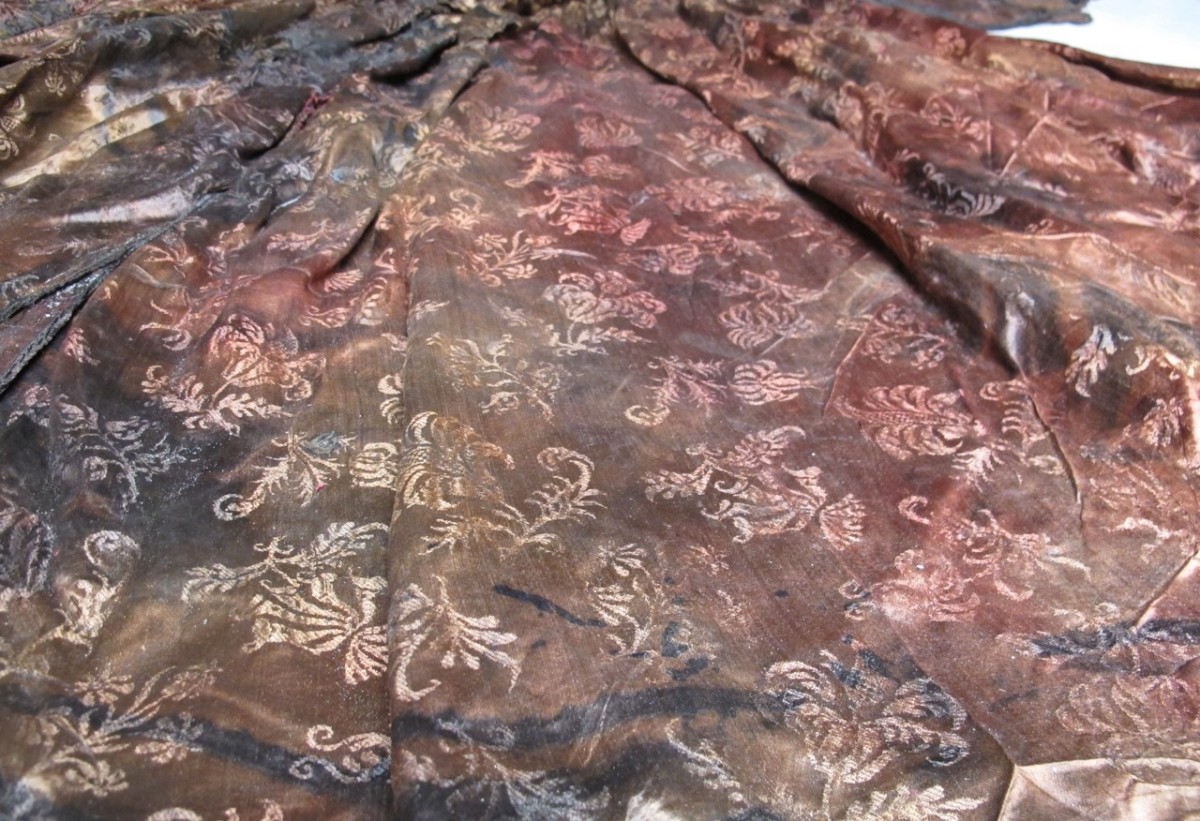 Also pottery from Italy, a gilded silver chalice and scents from Greece or Turkey

“Rarely, if ever, has such a big discovery been made in a maritime context”, says Maarten van Bommel, professor of conservation science and chair of the section restoration and conservation of cultural heritage at the UvA.

The items, which were found at the wreck of a 17th-century ship in the Wadden Sea near Texel, include a very luxurious gown that has remained remarkably well preserved. This gown serves as the showpiece of the temporary exhibition ‘Garde Robe’, which opened at museum Kaap Skil a few days ago.

The gown, which due to its rich detail is believed to have belonged to ‘high nobility, possibly even royalty’, is part of an extensive wardrobe. Among other articles, the site also yielded a cloak, stockings and silk and satin bodices decorated with large quantities of gold and silver thread. In addition to textiles, divers also found practical items like pottery from Italy, a gilded silver chalice and scents from Greece or Turkey. In addition, a number of book covers emerged from the depths that bear the coat of arms of the English Royal House of Stuart.

Experts from the Rijksmuseum, the University of Amsterdam and the Cultural Heritage Agency of the Netherlands (RCE), consider the textiles one of Europe’s most important clothing finds ever. Their discovery, in combination with other objects, makes this one of the foremost and most appealing finds in the history of Dutch archaeology. Because in a ship everything is preserved together – as if in a time capsule – this discovery can give great insight into the life and work of those on board and the trade relations and political situation of the time.

Shipwrecks of the Texel Roadstead

Off the coast of Texel, at Oudeschild, lie hundreds of shipwrecks, many from the Golden Age. Waiting for cargo or a favourable wind, they went down in storms and severe weather. However, their contents were well preserved under the sand. Due to the changing sea currents, the wrecks sometimes come loose, often threatening their cargo. Various organisations responsible for preserving these sites are currently investigating how best to deal with these processes. They are working together in this context with the Texel Diving Club, which called attention to this find.

The exhibition Garde Robe was officially opened on Thursday, 14 April, on behalf of all parties involved, by Jack van der Hoek, member of the Provincial Executive of North Holland. The spectacular opening ceremony was directed by Studio Aziz Bekkaoui. During the opening, well-known UvA archaeologist Prof. Jerzy Gawronski admitted that it was a huge surprise to him that the seabed around Texel is home to such treasures. Provincial Executive member Jack van der Hoek said he saw it as a great gift, which also entails a great responsibility.

Museum Kaap Skil is very proud to be able to show a selection of the find to the public for a month – until Monday, 16 May 2016. After that, the objects will be transferred to Huis van Hilde (Hilde’s House), the archaeology information centre of the Province of North Holland, where the research will be conducted. The University of Amsterdam, RCE and the Rijksmuseum will be closely involved in this research. The Province of North Holland, which acquired ownership of the find, is in charge of the investigation. Eventually, the find will be exhibited in museum Kaap Skil on Texel.