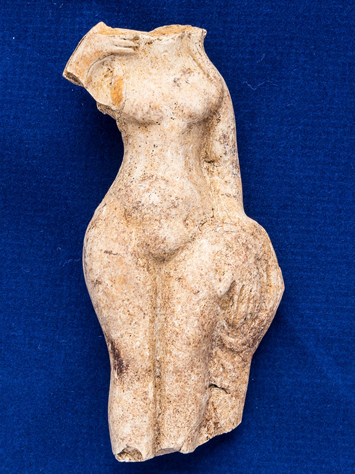 In a garden in Long Melford

A rare find was dug up by volunteer archaeologists during a rescue excavation at a property in Long Melford: A six inch tall figurine dating from the first or second century, known as a ‘pseudo Venus’. The find could point to the village being the “missing link” in a chain of Roman forts, it has been claimed.

Archaeologists claim that the statue would have had religious significance.

Local heritage centre volunteers John Broughton, Kenneth Dodd and John Nunn came across the find: “Ken was in the trench digging at the time and John was washing and cleaning finds when he handed me two lumps of what appeared to be white chalk,” John Nunn said. “We were all very excited when one of them turned out to be the figurine. We did some checking and discovered that fragments of similar statues had been found in Colchester, but nothing as whole as this one.”

Several statues of this kind are recorded as being found along Hadrian’s Wall where there was a series of Roman military forts. “Although we have no definitive proof that’s the case in Long Melford, it would have been an appropriate site for a Roman fort,” John Nunn added.

According to Mr. Nunn’s research, it could be the missing link in a string of forts across East Anglia which includes known sites at Colchester and Ixworth. “The forts were usually sited within a day’s march of each other so it would fit,” he explained.

“We are quite keen to do further research to see if we can solve the riddle as to how the statue came to be in Long Melford.”

Archaeologists know there is a Roman town in Long Melford under the Medieval and the modern village, but to confirm there was a Roman fort there, they would have to make more early military finds such as armour or buckles.

Apart from the pseudo-Venus figurine, the volunteers also found some pink Roman flooring known as ‘opus caementicum’, as well as Roman pottery. And back in 1970, a blue glass Roman bowl was found by Mr. Nunn in the village which is now on show in Ipswich Museum

The figurine will be sketched and analysed by members of the county council’s archaeology team before eventually going on show in Long Melford.

Archaeologists are shortly due to start a week long ground radar survey of the area to see if they can locate any new Roman roads or buildings that could shine light on the recent discovery.