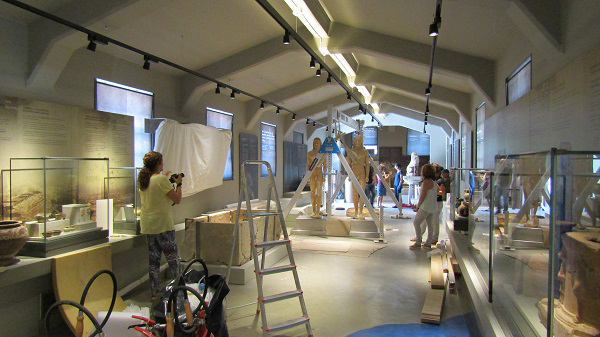 The twin Kouroi to be presented to the public

At the Archaeological Museum of Ancient Corinth

Not only Corinth but the whole country were eagerly awaiting the day on which the two stunning Kouroi seized from looters by the police in 2010 would be presented to the public. Two renovated galleries of the Archaeological Museum of Ancient Corinth will open their gates on July 13th. The “twin” Kouroi from Clenia which were illegally excavated and rescued at the very last moment are already standing on their bases and waiting for the visitors. Until now, six years after the looters have been arrested and the sculptures handed over to the Archaeological Service, no one has seen them, except of course of the experts who worked for their conservation and exhibition.

The two Kouroi were confiscated in the hands of looters on May 14, 2010 in Clenia of Coninth (identified with ancient Tenea of Corinth) and transferred to the National Archaeological Museum of Athens, as the Director of the Ephorate of Antiquities of Corinth, Konstantinos Kissas, said.

The Ephorate of Antiquities of Corinth has immediately conducted a surface survey at the “Xerokampos” site in Clenia, where the illegal diggers had violently removed the two statues. One week later, on May 22, 2010, a rescue excavation began on a field of the same area, at the spot the illegal diggers said they had found the statues. Archaeologists brought to light an extended cemetery, which had been in use from 560 BC until the early 3rd c. BC. A total of 77 tombs of various types were excavated.

Nine days after the beginning of the excavations archaeologists found the missing parts of the Kouroi, two right legs, a foot attached to the plinth, tiny parts of their hair and an ankle.

These parts were correlated to two similar porous sarcophagi, placed within a grave trench. The lids covering the sarcophagi were much thicker compared to the rest found in the cemetery. This led archaeologists to the conclusion that the two Kouroi must have been standing above the sarcophagi.

After four years of intense efforts and extended works at the Archaeological Museum of Ancient Corinth, the Ephorate of Antiquities of Corinth presents two renovated galleries, with exhibits related to the life and history of the city-state of Corinth, from the 10th c. BC until 146 BC, when the city was destroyed by the Roman army.

The exhibition features 430 artifacts, many of which were found during recent excavations in the area.

The Eastern Gallery presents objects from the cities and sanctuaries of ancient Corinthia, among which is the grave complex of the two marble Kouroi with their sarcophagi from the cemetery of ancient Tenea.

In the South Gallery artifacts from the city, the sanctuaries and the cemeteries of ancient Corinth are exhibited, featuring aspects of the public and private life of Corinthians, like the marble “Sphinx of Aetopetra”, architectural members of the Apollo Temple. Also exhibited is an abundance of objects related to the every-day lives of ancient Corinthians and the overseas expanding of the city to the Western Mediterranean.