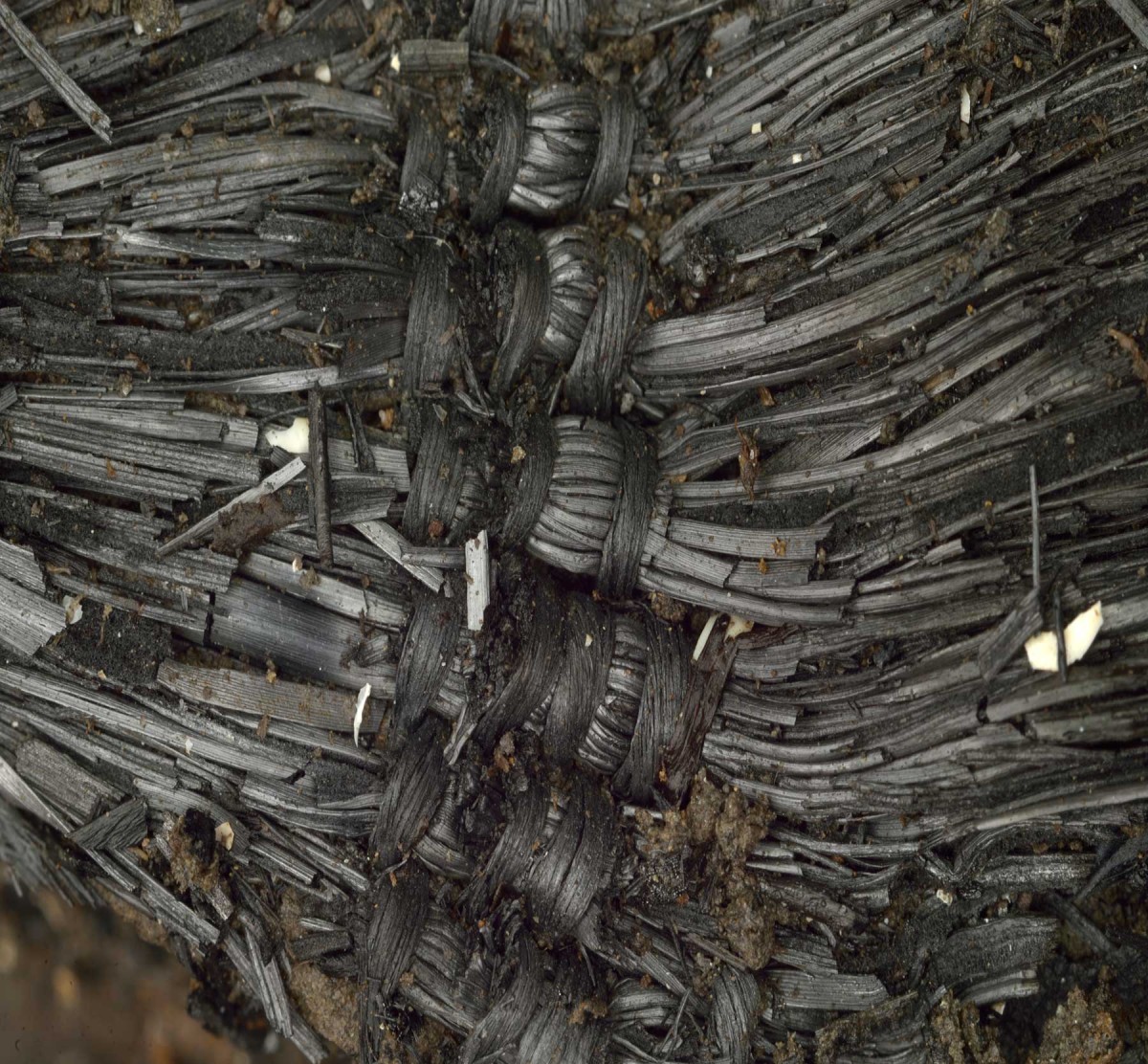 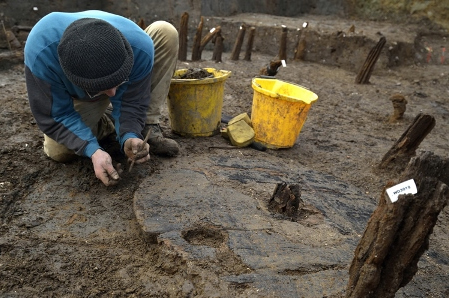 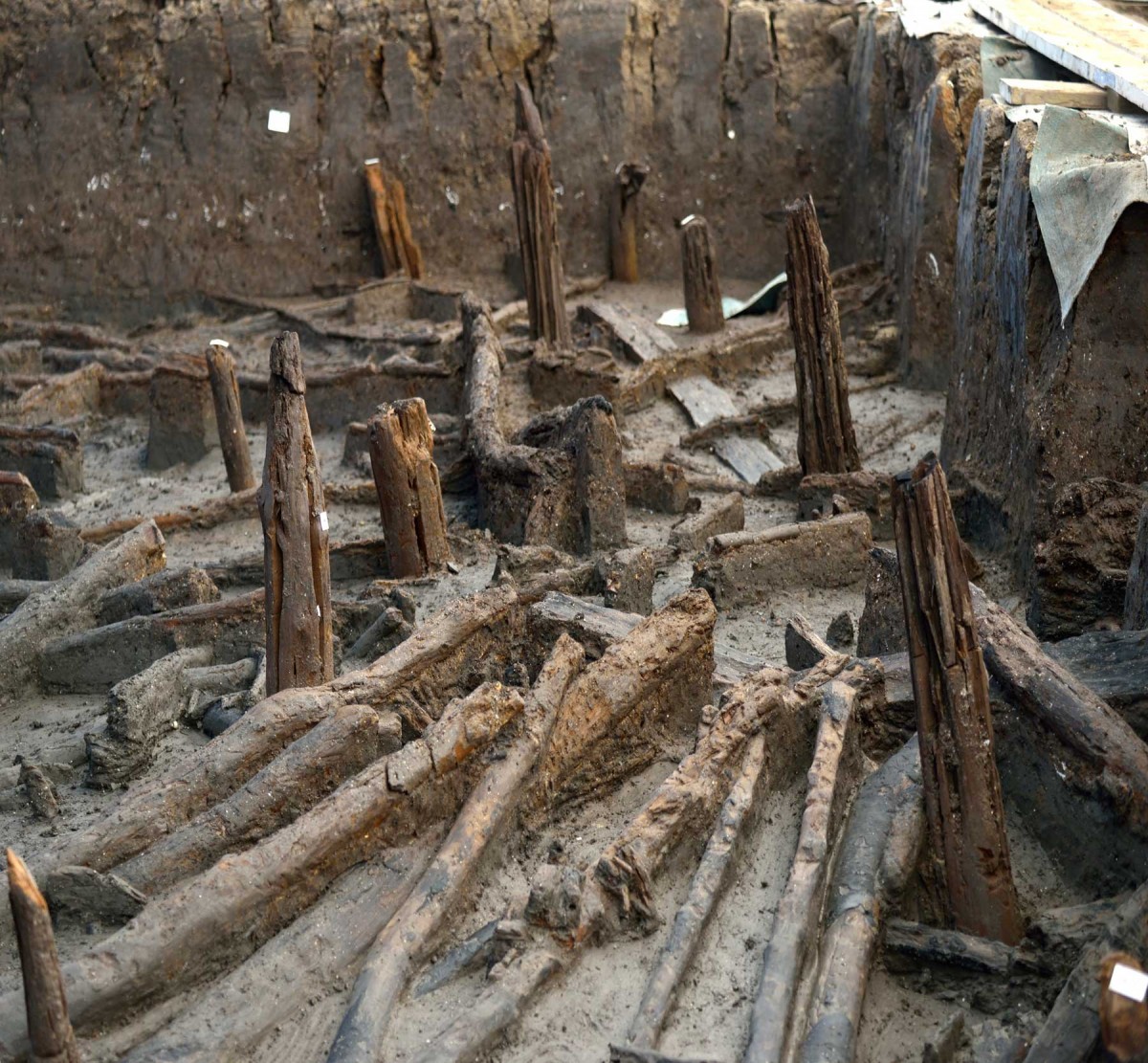 Must Farm site in Cambridgeshire

The findings of two Bronze Age homes built on wooden stilts five feet above a river at the Must Farm site in Cambridgeshire have been unearthed in an archaeological excavation which has been dubbed the “Pompeii of the Fens”.

The site, which opened to the media on July 13, 2016, provides new insights into the way ancient Britons lived.

Over the last eight months archaeologists, including experts from the University of Glasgow, have excavated six feet of mud to unearth the settlement dating back 3,000 years, one of the best-preserved Bronze Age houses in Britain.

It is thought the buildings were destroyed by a fire around 1000-800 BC, causing them to collapse into the River Nene in Whittlesey, near Peterborough, where they have been preserved in the thick silt.

Funded by Historic England and Forterra, the excavation has compared the site to the Roman city Pompeii in Southern Italy, because it has provided a glimpse into life during the Bronze Age period.

Among the treasures they have unearthed are woven textiles which could have been Bronze Age rugs and wall hangings.

Dr Susanna Harris, Lecturer in Archaeology at the University of Glasgow, who is an expert in fabrics at the Must Farm site, said: “Fibres and fabrics would have been common in the Bronze Age, but they are rarely found on archaeological sites. This is because these organic materials are only preserved in special conditions.

“At Must Farm the textiles are preserved because they were charred in the fire that destroyed the houses then buried in the anaerobic waterlogged environment. This protected them from decay. Originally the textiles would have been soft and supple, now only black, fragile fragments survive.

“The Must Farm fibres and fabrics are significant because they show the types of fabric people had in their homes and how they made them. They were all found inside the roundhouses and include hanks of plant fibres, spools and balls of thread, woven textiles and twining. This illustrates different stages of textile production. “

The findings suggest the ancient Britons may have used two clay weights as loom weights to hold the warp threads under tension on a loom. This suggests that households living at Must Farm were engaged in processing plants for fibre and were able to manufacture their own textiles.

Dr Susanna Harris explains: “The woven textiles are remarkable because they are very fine. Some are woven with threads around the diameter of coarse human hair (100-200μm). Compared to textiles from earlier British sites, the Must Farm textiles are much finer.

“Looking on a wider geographical scale, they are among the finest woven linen textiles we have in Europe for this period. These fine textiles tell us that people living in these round houses produced high quality textiles, comparable to the very finest cloth of their European contemporaries.

Another fabric technique, called twining, has been found at Must Farm. Unlike woven textiles, twining can be made with or without a loom. Twining is a versatile technique and is widespread in time and space. The presence of twining at Must Farm provides evidence of the range of fabrics that people made and used in their houses; they bring the homes of Must Farm to life.

The people of Must farm used both cultivated and wild species of plant fibre for making textiles.

At least two types of fibres processed from plant stems are present in the Must Farm fibres and fabrics. Flax, which is a domesticated crop known to have been farmed in Britain from the Neolithic period onwards, was used to weave linen textiles.

In addition, hanks of plant fibres and twined fabrics were made using wild species such as lime bast and nettle which were available in the local environment. Lime bast would have been processed from the inner bark of lime trees.