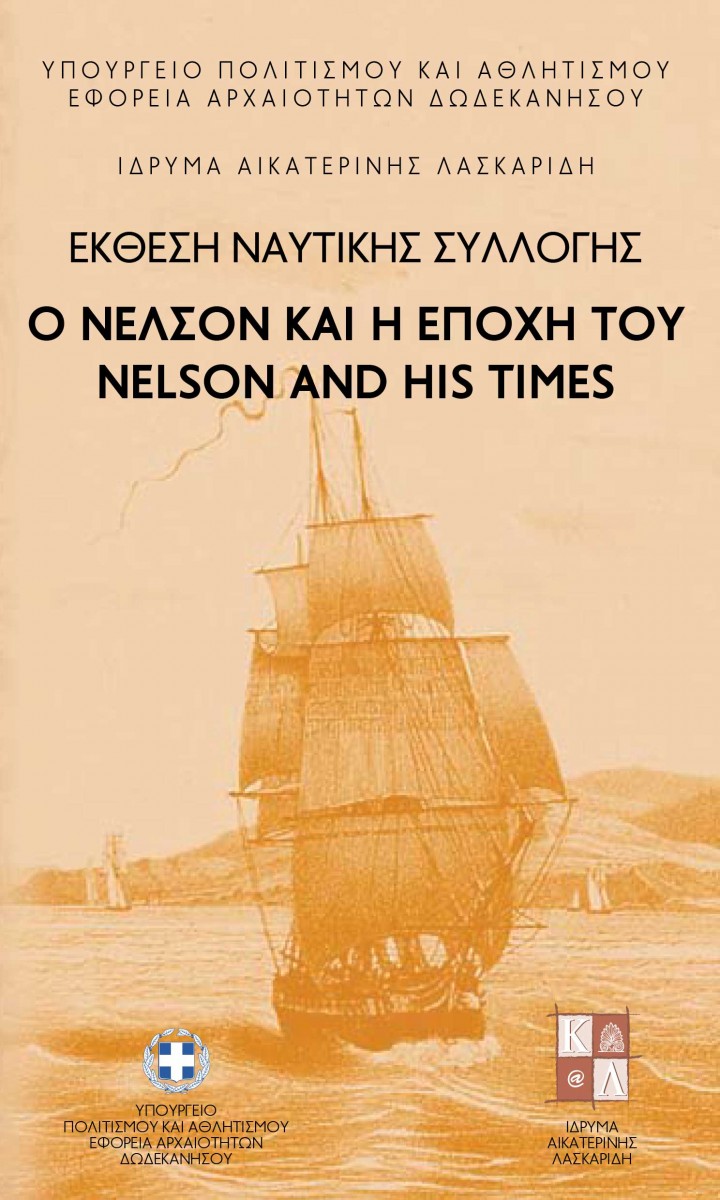 Nelson and His Times

Exhibition in the Medieval City of Rhodes

The exhibition “Nelson and His Times”, hosted by the Ephorate of Antiquities of Dodecanese and organized by the Aikaterini Laskaridis Foundation, opens on July 16, 2016 at the Palace of the Grand Master in the Medieval City of Rhodes and will run through October 30, 2016.

Admiral Lord Nelson and his Times

Admiral Lord Horatio Nelson (1st Viscount Nelson, 1st Duke of Bronté, 1758-1805) made his career in the British Navy in the second half of the 18th and into the early years of the 19th century. It was the time when ships sailed the seas for months, embarking upon long, dangerous trips and enduring all sorts of adversities. His lifetime was marked by the French Revolution (1789), the wars that broke out in Europe in its aftermath (1792-1802) as well as the Napoleonic Wars (1803-1815).

In this turbulent era, Lord Nelson became a leading figure who excelled thanks to his strategic skills, nautical perception and unbridled aggression against the enemy. Wounded several times during naval battles, he lost one eye and an arm. The greatest and most famous of his victories has been the Battle of Trafalgar, in 1805, in which he was killed in action shortly before its end, by a French sniper. Nelson’s naval victories established Britain’s naval supremacy in the 19th century.

Dozens of handwritten letters by Admiral Nelson, personal items, newspapers of his time, paintings and engravings capturing his life and achievements, as well as 1,500 books on Nelson and the period in which he lived, are part of the Aikaterini Laskaridis Foundation’s Maritime Collection. The collection is supplemented with some 30 bone ship models, built by French prisoners of the Napoleonic Wars, alongside dozens of articles and books related to ships and sea life. Parts of the collection have been presented in exhibitions in Greece and abroad.

The purpose of the Aikaterini Laskaridis Foundation is to promote Greek culture as well as historical and maritime research. It boasts a Historical Library that holds incunabula and early printed books among its collections. In addition, it has developed a Lending Library and a major Naval Collection, part of which is presented in this exhibition. The Foundation actively supports the current underwater excavations at the Antikythera Shipwreck and the study of their findings. Consistent with an ongoing commitment to digital culture, it has launched the website “Travelogues – Travellers’ Views” and the interactive application “ToposText©”. It has also been responsible for renovation and reconstruction work on historic stone lighthouses as well as for sponsoring the renovation of the Floating Maritime Museum, Armoured Cruiser “Georgios Averof”. Approved by the Ministry of Education, the educational programs for students of primary and secondary education form a significant part of the Foundation’s activities and so do the programs concerned with children’s mental health. The Foundation, in its premises which are open to the public, organises and hosts numerous scientific and cultural events.

The Palace of the Grand Master

The Palace of the Grand Master, widely known as “Castello”, is situated at the northwest end of Medieval City of Rhodes. The imposing complex’s dimensions are 262x246ft (80x75m) and its plan develops around a rectangular courtyard. Built in the early 14th century by the Knights Hospitaller as part of the fortification of the Medieval Town, the Palace became administrative centre and kernel of their defence. Already abandoned in the Ottoman period, it suffered the final blow in 1856, when its roof finally collapsed due to a gunpowder explosion at the neighboring church of St. John. It owes its present form to the extensive restoration work carried out during the Italian occupation (1912-1947). The reconstruction of the palace began in 1937 with the initiative of the Italian Governor Cesare Maria De Vecchi: it was converted initially to headquarters and subsequently to the official residence of the respective Italian commander and to the summer palace of King Victor Emmanuel III.

The five consecutive rooms of the temporary exhibition are situated in the northeastern side of the Palace’s first floor. Their ceilings are wooden and the walls decorated with murals painted during the Italian restoration. The repetitive geometric and vegetal decoration on their surfaces, in combination with vivid, earthy colors, contributes towards a distinctively pleasant ambience and the creation of a charming environment. The windows of the large corner room offers unobstructed view of the sea, which played a major role in Nelson’s life, and of the port of Rhodes, one of the most important ports in the Mediterranean. A Murano crystal chandelier is hanging from the ceiling as a reminder of the building’s Italian past, while the Regency and Empire furniture that are also featured in the exhibition were obtained during the same period as part of the palace’s decoration, to fulfill the purposes of its use at the time.