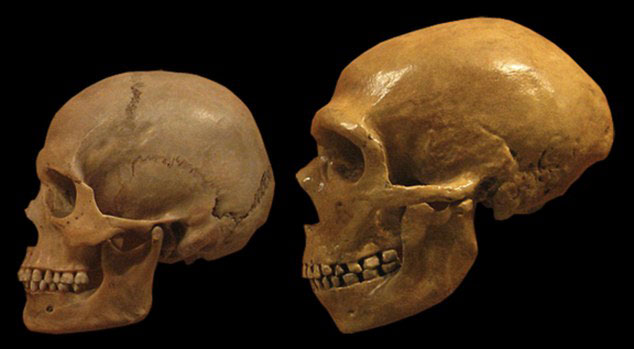 Neanderthal brains grew in patterns similar to ours

A new study of Neanderthal skulls yields similarities with ours in the way they grew. A team of researchers from the University of Zurich, Switzerland, examined 15 Neanderthal skulls, of six adults and nine children. With the use of software they produced 3D casts of the brain case, which allowed them to study patterns in the Neanderthal brain shape through childhood. The findings were compared with patterns of brain development in modern children.

The study showed that Neanderthal brains at birth were longer, wider and flatter than modern human brains. The Neanderthal brain grew a lot like ours, with areas such as the cerebellum expanding rapidly during childhood and then very slowly in early adulthood.

The team argues that similar patterns in brain development might indicate similar cognitive and therefore behavioural patterns. This theory is supported by the fact that Neanderthals, as archaeological evidence indicate, used similar symbolism, made similar technological advancements and perhaps had, just like we do, skill with language.

However, not all scientists agree that Neanderthals and modern-day humans were so similar. According to Philipp Gunz at the Max Planck Institute for Evolutionary Anthropology in Leipzig, Germany, Neanderthal brain and modern human brain might have been similar at birth but developed differently. He and his colleagues analysed the shapes of 9 Neanderthal skulls in 2010, as well as specimens used in the new study.

Neither does Emiliano Bruner, at the National Research Centre on Human Evolution in Burgos, Spain, embrace the new theory without scepticism. He argues that morphological similarities are irrelevant to cognitive ones.

The findings of the study were published in the journal Current Biology.