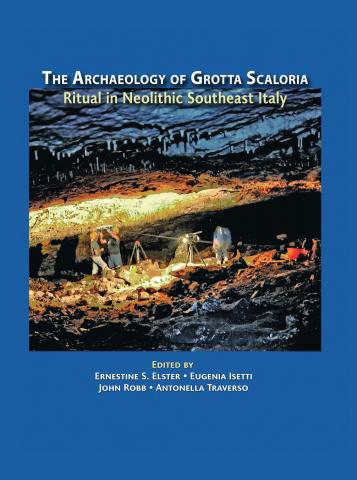 The Archaeology of Grotta Scaloria. Ritual in Neolithic Southeast Italy

Scaloria Cave, Grotta Scaloria, is in Apulia, where the Tavoliere Plain rises to meet the Gargano peninsula. Hundreds of villages were located there during the Neolithic period, the villagi trincerati first identified from aerial photographs taken by the British RAF during WW II. Certainly some of these Neolithic villagers of the Tavoliere visited Scaloria Cave, for refuge from the elements, and for the mysterious rituals held in both the Lower and Upper Chambers. Grotta Scaloria was first discovered and explored in 1931, excavated briefly in 1967, and extensively from 1978–80 by a joint UCLA-University of Genoa team, but never fully published. The Save Scaloria Project was organized to locate this legacy data, and to enhance that information by application of the newest methods of archaeological and scientific analysis.

Finally, this important site is published, in one comprehensive volume that gathers together the archaeological data from the Upper and Lower Chambers of Scaloria Cave, which indicate intense ritual and quotidian use during the Neolithic (ca 5600-5300 BC). The Grotta Scaloria project is also important as historiography, since it illustrates a changing trajectory of research spanning three generations of European and American archaeology.

“We have worked under the moral obligation incumbent on all archaeologists to publish what has been excavated, ” Ernestine S. Elster writes in the Introduction. “Perhaps that responsibility is even greater when the site is as significant as Scaloria Cave. Nevertheless, excavation is destruction, and without publication (electronic or otherwise) the research is lost. In this instance, and because Scaloria Cave was excavated by UCLA and the University of Genoa so many decades ago, its approach in the 1970s typifies a joint archaeological project of its era. Thus, the Save Scaloria Project ( SSP ) provides an opportunity to enter into the context of that time and even glimpse its historiography; indeed, the archaeological history of Scaloria Cave reveals a great diversity of archaeologists over some 80 years and several national traditions. To that end, not the least important feature of this publication is the historical documentation reproduced in the appendices. This includes the observations of many of the explorative teams who first ventured into the cave’s depths. It is included both because it is the original and often the only record of important firsthand observations on the cave, and because it gives a sense of how each generation of archaeologists explored, observed, and understood the cave. A rich visual archive, hundreds of photographic images of 1978-1980, is also accessible (Appendix 10, Portfolio).”