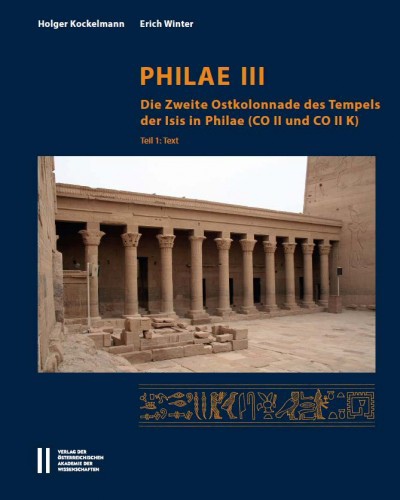 The Philae Temple Text Project of the Austrian Academy of Sciences, Vienna, has published the third volume of hieroglyphic inscriptions and scenes. The project is preparing a full edition of the decoration of both the Great Temple of Isis and of all smaller sanctuaries and buildings of Philae. The third volume contains the reliefs of the Second East Colonnade, located opposite the mammisi.

The research project „Edition of the Hieroglyphic Temple Inscriptions of Philae“ of the Austrian Academy of Sciences (Vienna) has published a full edition of the scenes and inscriptions of all the temples of Philae island. The project was inaugurated by Hermann Junker with the volume Der grosse Pylon des Tempels der Isis in Philae, and continued with Philae II Das Geburtshaus des Tempels der Isis in Philae by Hermann Junker and Erich Winter. Philae III is one of several further volumes. It contains the scenes and inscriptions of the Second East Colonnade (including the „Room of Tiberius“), which is located opposite the birth house at the Festival Court between the first and second pylon. The decoration of the colonnade and its four chambers („Laboratory“, „Room of the Judges“, „Morning House“, „Library“) dates from the reign of Ptolemy VIII Euergetes II to the time of Tiberius. Philae III provides a complete publication of the colonnade and is an important contribution to our understanding of the theology of Philae. In part 2 of the two-volume set, all scenes and inscriptions of the colonnade are published in line drawings, while the first part contains a richly annotated transliteration and translation of the hieroglyphic texts. In total Philae III comprises more than 150 ritual scenes and inscriptions; among the latter is a recipe for the incense Kyphi, invocations of the doorkeepers, a praise of Philae, accompanying texts of door bolts, and a block of Ptolemy VI Philometor reused in the north entrance of the colonnade.