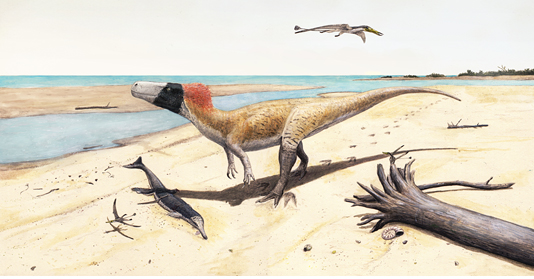 A monster put in its place

An analysis of the fossil known as the Minden Monster has enabled paleontologists to assign the largest predatory dinosaur ever found in Germany to a previously unknown genus, among a group that underwent rapid diversification in the Middle Jurassic.

This huge dinosaur dates to about 163 million years ago, in the Middle Jurassic. And it is not only the first carnivorous dinosaur from this period to be unearthed in Germany, it is also the largest ever found in the country: Based on the remains so far recovered, the specimen is estimated to have been between 8 and 10 meters in length. In comparison with other carnivorous dinosaurs, the animal was very sturdily built, weighed more than 2 tons – and was probably not fully grown when it died. Now Oliver Rauhut, a paleontologist in the Department of Earth and Environmental Sciences at LMU (who is also affiliated with the Bavarian State Collection for Paleontology and Geology in Munich), together with Tom Hübner and Klaus-Peter Lanser of the LWL Museum of Natural History in Münster, have undertaken a detailed study of the fossil material, and concluded that the specimen represents a previously unknown genus and species to which they have given the name Wiehenvenator albati.

The first fossilized bones and teeth were discovered in 1999 during a routine surface survey in an abandoned quarry in the Wiehengebirge, a range of low hills south of Minden. Although the fossil clearly represents a terrestrial form, the remains were embedded in marine sediments. It is however known that, in the Middle Jurassic, large areas of what is now Central Europe lay below sea level, and the shallow waters of this sea were dotted with islands. These islands appear to have been the home of a broad spectrum of carnivorous dinosaurs, some of which reached very large sizes, Rauhut explains. “Moreover, most of them belonged to the group known as the megalosaurids.”Wiehenvenator albati was a megalosaur and other representatives of the group have been found in France and England. In fact, the megalosaurids are the earliest large carnivorous dinosaurs we know of.

The remains of W. albati that have so far been discovered do not constitute a complete skeleton. The material is, however, very well preserved, and anatomical details can be clearly discerned which unequivocally prove that this individual not only represents a new species, but a new genus. Some of the teeth that have been found are as big as bananas, and have a recurved shape, pointing backwards into the pharynx. Like Allosaurus and the much younger Tyrannosaurus rex, W. albati was bipedal, standing on its hindlegs, while its forelimbs were much reduced in length.

A phylogenetic analysis of the morphology of the specimen revealed that Wiehenvenatorcan be assigned to a group of dinosaurs that underwent a rapid adaptive radiation during the Middle Jurassic, giving rise to a diverse array of species in a relatively short time. “Practically all the major groups of predatory dinosaurs originated during this period, including the tyrannosaurs – which, however, only gave rise to their really gigantic representatives some 80 million years later – and the first direct ancestors of the birds,” says Rauhut. This huge burst of speciation was probably made possible by the preceding extinction of a large proportion of the more primitive forms of predatory dinosaurs at the end of Lower Jurassic, which may in turn have been precipitated by a change in the climate due to widespread volcanic activity.