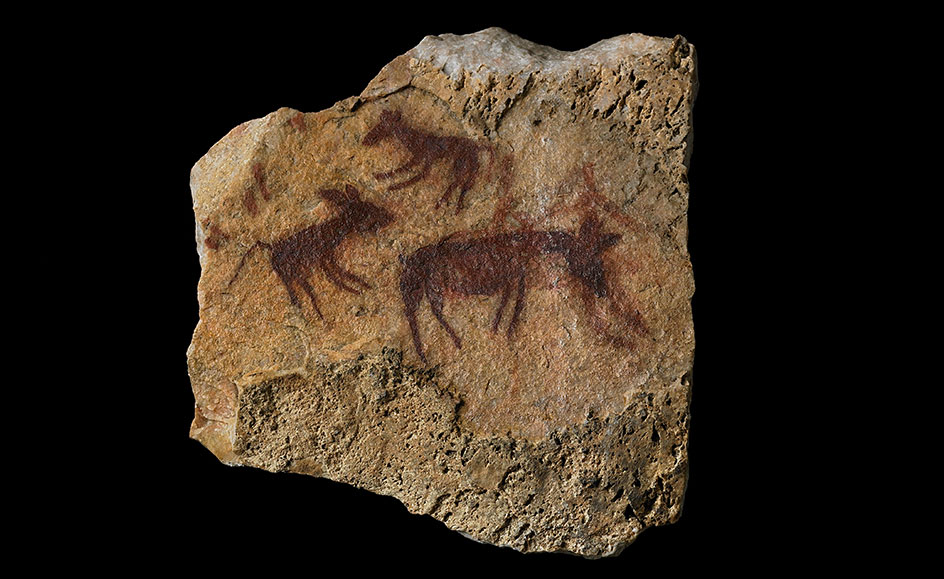 Rock art in southern Africa connects us to over 30,000 years of human history. This British Museum display focuses on one central example of rock art and its importance for San|Bushmen.

Rock art was a means of expression in southern Africa for thousands of years. Much of it was made by the ancestors of today’s San|Bushmen people – a term that describes the many different hunter-gatherer-fisher groups living in southern Africa who have related languages and cultural traditions. Both ‘San’ and ‘Bushmen’ are considered offensive terms by some, although others have positively adopted them.

San|Bushmen communities were traditionally small and nomadic. They only stopped making rock art around 100 years ago due to radical social changes brought about by European settlement. Despite this, many cultural traditions associated with rock art continue today. The images they left behind reveal insight into their lives, survival and spiritual beliefs. The Museum has been actively documenting this type of art since 1875.

The rock art in this display came into the Museum’s collection in 1920. Originating in Zimbabwe, it features a group of antelope – probably kudu, which had symbolic meaning in San|Bushmen belief systems. It was painted with a red ochre pigment onto pink quartzite rock. The images’ fine detail suggests they were painted with a brush rather than a finger. Beneath the animals are two faded human figures, which may have been painted at a different time.

The display also features the results of recent analysis by British Museum scientists, which suggests that water erosion caused the fragment to fall and that it had been on the ground for a significant amount of time before it was collected. Through focusing on this particular example, the display provides a general introduction to San|Bushmen rock art in southern Africa– looking at its diversity, how it is made, and its continuing importance today.