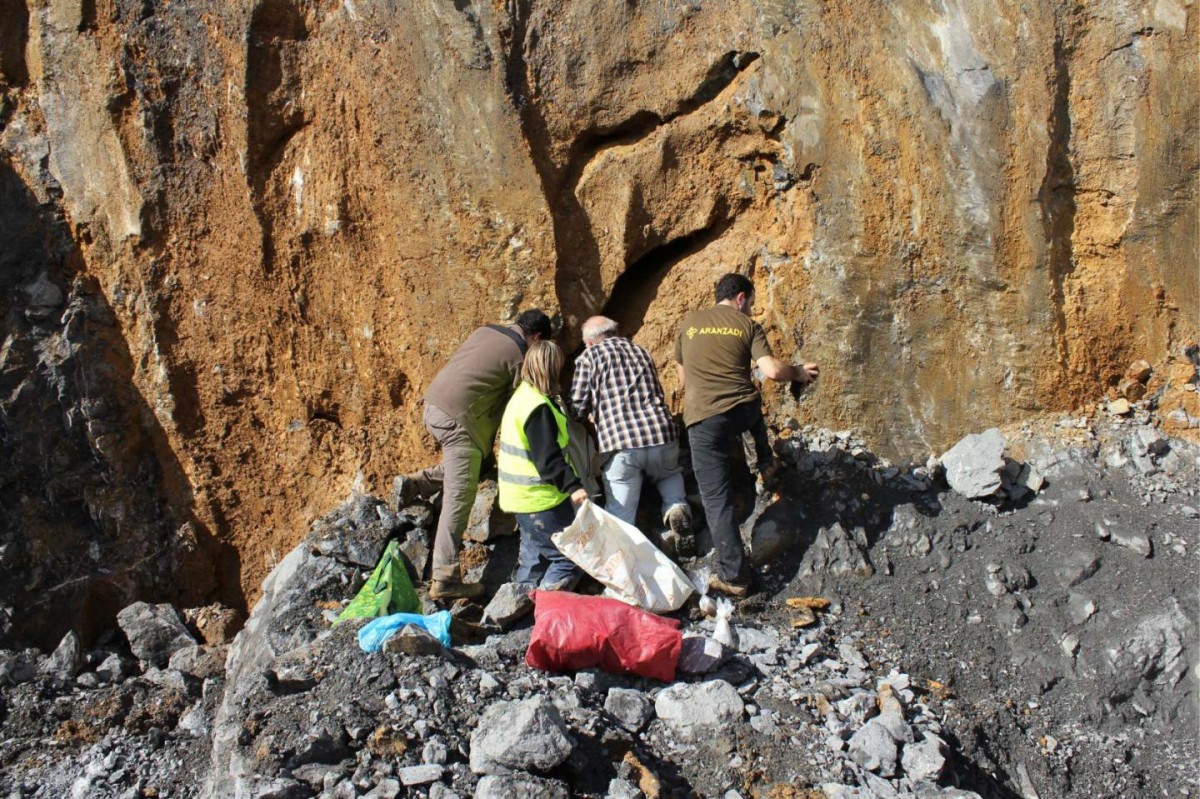 Exceptional palaeontological site going back 100,000 years is unearthed in Arrasate

The deposit being explored by a team from the UPV/EHU-University of the Basque Country contains at least 40 species and reflects the fauna in the area during the Upper Pleistocene.

The site was discovered in 2012 by quarry workers after carrying out a blasting operation. When they spotted the presence of a great many fossil remains in the clay that filled the cave, they halted the works and contacted Prof Alvaro Arrizabalaga of the Department of Geography, Prehistory and Archaeology. After confirming the importance of the site, Alvaro Arrizabalaga and Maria Jose Iriarte decided in 2013 to carry out an emergency excavation in collaboration with the company exploiting the quarry to retrieve the bone remains in the context at the site named Artazu VII.

In the Cantabrian Region and on the Iberian Peninsula there are very few sites belonging to the Upper Pleistocene such as Artazu VII without signs of human activity. And even fewer with such an abundance and wealth of species in an exceptional state of preservation and in which a multidisciplinary study has been conducted like the one being carried out in this project. The discovery of this site has been published in the prestigious journal Comptes Rendus Palevol led by the pre-doctoral researcher Aitziber Suárez-Bilbao, who is currently writing up her thesis at the UPV/EHU.

The Pleistocene is a critical phase in human history. Specifically, this epoch is characterised by the fact that it saw various climate changes on a global as well as regional scale. Artazu VII is of interest because it is a chasm which at the time functioned as a natural trap into which various animals fell by chance. This fact means this site is of great palaeontological and palaeoecological interest. This is because it is an accumulation produced not by human beings or by any other biological agent, and so the faunal assemblage retrieved has not been biased by the trophic appetites of any organism. In other words, the reason for the build-up of the bone remains was the accidental falling of organisms into a chasm, and not the accumulation of the remains of organisms hunted by a predator. So the assemblage retrieved reflects in a more precise way the fauna in the area at the moment when the chasm was filled. Therefore, the use of precise bioindicators at this site is enabling high resolution palaeoecological and palaeoenvironmental work to be carried out.

In the preliminary study published in the international journal, the taxonomic list numbers at least 40 species, including micro- and macro-vertebrates present at Artazu VII. Furthermore, most of the remains have been recovered whole or with post-depositional fractures and many of the bones have been preserved in anatomical connection. So the presence of species that are currently extinct or which today are absent because they have shifted geographically has been confirmed in the surroundings of Arrasate during a period dating back 100,000 years ago. The appearance of the following stand out: the cave lion (Panthera spelaea) and the leopard (Panthera pardus) among the carnivores, and the steppe bison (Bison priscus) and the red deer (Cervus elaphus) among the angulates. The research conducted so far on the micro-vertebrates (mammals, amphibians and reptiles) has confirmed a series of warm events at the moment the chasm at Artazu VII was filled.

The study of this site is part of the PhD thesis by the geologist Aitziber Suárez at the UPV/EHU-University of the Basque Country and supervised by Dr Alvaro Arrizabalaga and Dr Xabier Murelaga. The scientific nature and previous experience of the members that make up the research team is allowing a novel, integral study to be made. The main aims of the study are to carry out combined geological analyses (Sedimentology and Stratigraphy) of a palaeontological nature of the macrofauna and microfauna (Palaeobiology and Palaeoecology) and of a geochemical nature (Palaeodiets and fauna migrations) and thus enable a detailed palaeoenvironmental reconstruction of this site to be produced. Other researchers from different institutions have also collaborated in the paper published: Jone Castaños, Naroa Garcia and Maria Jose Iriarte of the UPV/EHU, Pedro Castaños of the Aranzadi Society of Sciences, and José Eugenio Ortiz and Trinidad Torres of the Polytechnic University of Madrid (UPM).