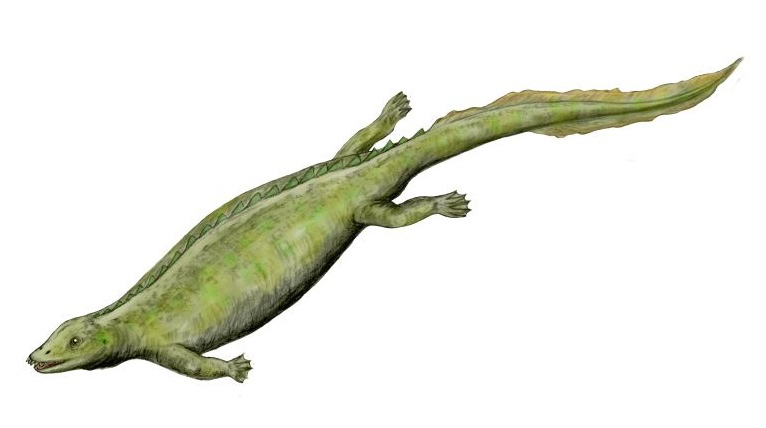 Placodonts are a case in point — specifically, the placodont teeth that Stephanie Crofts, an NJIT post-doctoral researcher, has written about in an article recently published in the journal Paleobiology. Now working with Assistant Professor of Biological Sciences Brooke Flammang in her Central King Building lab, Crofts is the co-author of “Tooth occlusal morphology in the durophagous marine reptiles, Placodontia (Reptilia: Sauropterygia).”

Placodonts, a group of extinct marine reptiles, lived at the beginning of the Triassic Period, the beginning of the age of dinosaurs, some 250 million years ago. They thrived in the shallows of the sea that split the ancient supercontinent Pangea. Their fossils have been found in Germany, Switzerland and Italy, and new specimens are being discovered in China.

All placodonts have teeth on their upper and lower jaws, as well as a set of teeth lining the roof of the mouth. But over their evolutionary history, Crofts explains, placodonts developed specialized “crushing” teeth well-suited for eating the “hard prey” creatures that shared their environment — creatures with thick shells, like clams or mussels.

The evolutionary ancestors of placodonts had long, pointy teeth, even on the roof of the mouth, especially suitable for catching soft-bodied prey. In contrast, placodonts are easily identified by their crushing teeth, bulbous in early placodonts and flattened in species that occur later in the evolutionary lineage. The basic question for Crofts: How well did these teeth function, and did later placodonts achieve an “optimal” crushing tooth?

Working with an international team of colleagues she met before joining NJIT in 2016, Crofts traveled to museums throughout Europe to collect data on the shape of placodont teeth. Crofts’ collaborators were James Neenan, a research fellow at the Oxford Museum of Natural History in England, Torsten Scheyer, associate professor at the University of Zurich’s Palaeontological Institute and Museum, and Adam Summers, professor in the University of Washington’s Department of Biology and head of the comparative vertebrate biomechanics lab at the university’s marine field station, Friday Harbor Laboratories. Their investigative effort was made possible by funding from the Society of Vertebrate Paleontology, the University of Washington, the National Science Foundation and Swiss National Science Foundation.

In the course of her travel, Crofts compared the shapes of placodont teeth in the museum collections to models that tested how efficiently the teeth would break shells and how well they resisted breaking under pressure. Based on these models, Crofts and her team were able to predict that placodonts should have evolved a slightly rounded tooth surface, which would break shells efficiently without damaging the tooth itself. While some later occurring placodonts did just that, evolution equipped the latest known occurrences of these creatures with teeth that had quite different and very intriguing characteristics.

Instead of the predicted optimal tooth, this group of placodonts developed a complex tooth surface with a shallow, crescent-shaped furrow surrounding a small cusp on the principal crushing teeth. As Crofts and her collaborators suggest in the Paleobiology article, this tooth structure may have worked in a way similar to the function proposed for early hominin molars — with the furrow holding prey in place while the small cusp applies the force needed to break through the prey’s shell. Further, Neenan and Scheyer have demonstrated that there is a slower rate of tooth replacement in this same group of placodonts, likely because changes in tooth shape protect the tooth from failure.