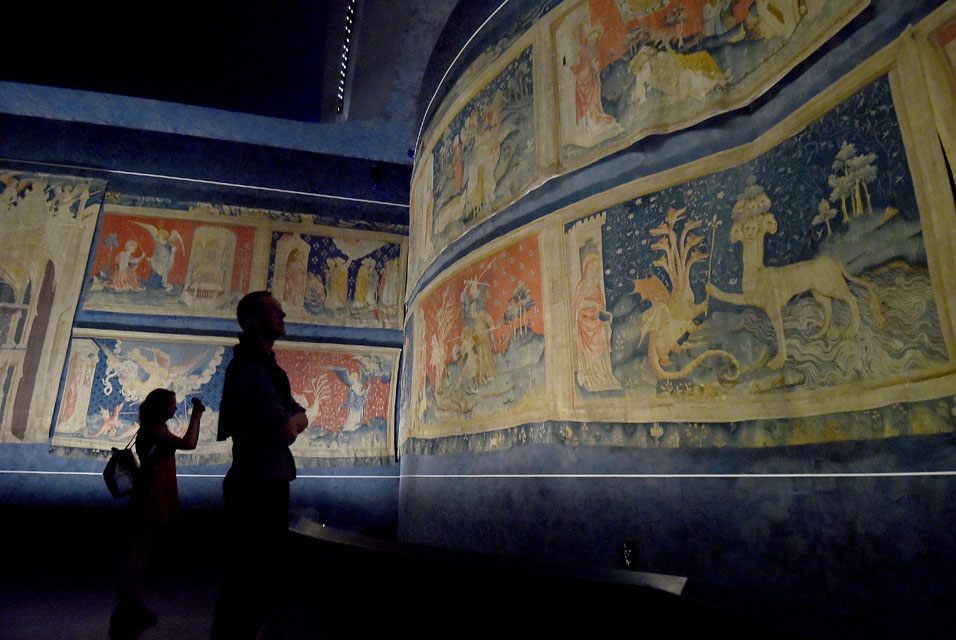 France’s Apocalypse Tapestry is getting a welcome clean up

Documentation and cleanup on medieval 104 m. wooven piece of wool and silk

France’s Apocalypse Tapestry is getting a welcome clean up. This is how the French press explains the latest announcement on the world’s largest and oldest surviving medieval set of tapestries, on display at the Angers Chateau, about 300 kilometres (190 miles) southwest of Paris, in western France.

The Apocalypse tapestry, characterized as “Angers’ very own answer to the Sistine Chapel” (which it predates by a full century), is a 104-metre wooven piece of wool and silk, showing the Apocalypse according to the Revelation of Saint John in a large number of scenes, 70 of which survive today. It was first crafted in 1373 under the commission of Louis I, duke of Anjou.

After a century in the keep of the dukes of Anjou, Rene of Anjou bequeathed the artwork in the late 15th century to Angers Cathedral. Some 200 years later, it suffered multiple damages during the chaotic aftermath of the French Revolution, cut up and used variously as floor mats, stable insulation and anti-frost covers for fruit.

Fallen into “a thousand fragments,” was rescued in 1850 by a church canon, who took a first stab at restoration, while since 1905 it consists state property. Still, being on display since the mid-1950s it has seen multiple signs of wear and tear as well as the effects of gallery lighting. This is where professional restorers come to the spotlight.

With a deep cleaning process being in progress, the French Ministry of Culture collects info aiming to identify the nature of harm the piece has suffered so decisions regarding the most suitable restoration techniques to be put into effect. Elements such as the amounts of dust each part of tha tapestry bears, humidity and temperature levels, color deterioration, data on previour minor and major restorations and repairs are all carefully documented.

As the Mininstry of Culture says, it’s high time “to see what state this old lady of upwards of 600 years of age is in.” and then proceed to what it is best to restore it to its former glory.