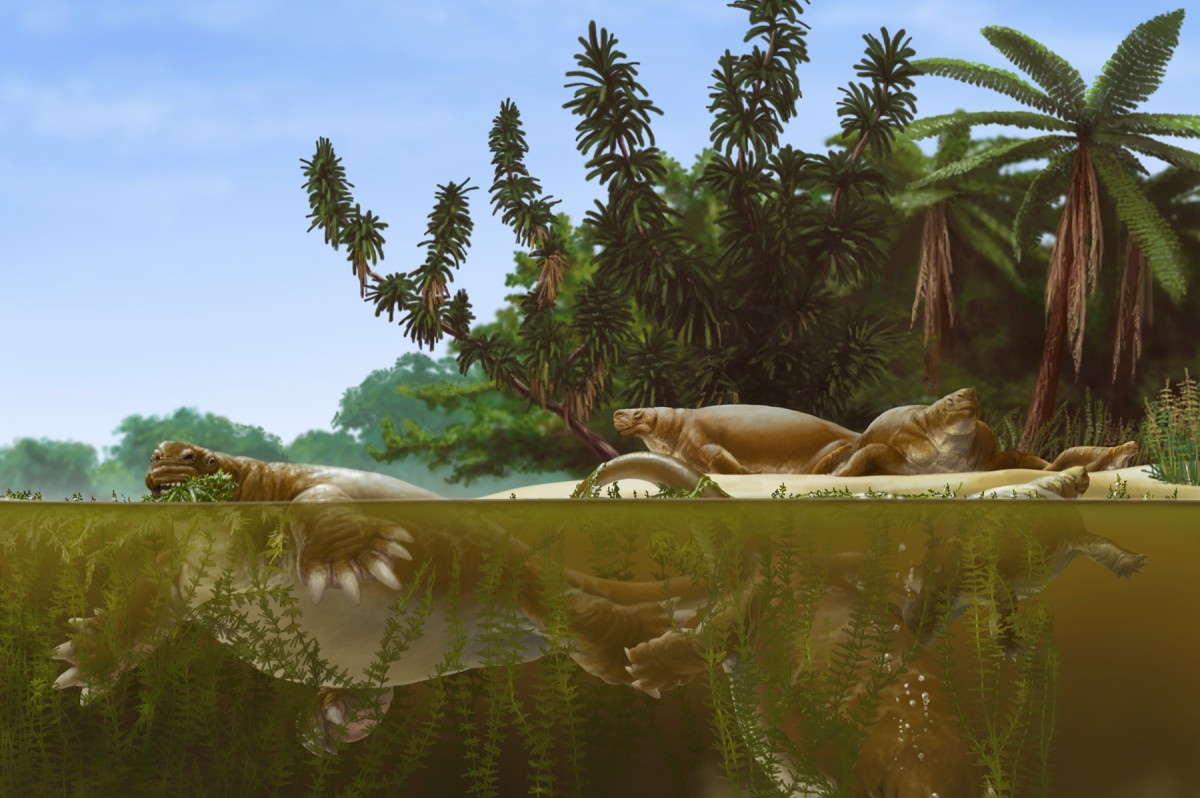 Diaphragm much older than expected

The diaphragm is unique to mammals and our most important respiratory muscle. Scientists at the University of Bonn and the Zoological Research Museum Alexander Koenig examined breathing in extinct caseids and came to the surprising conclusion that the diaphragm evolved about 50 million years earlier than previously assumed. The study just appeared in the Annals of the New York Academy of Sciences.

“Evolution has brought up some weird animals, such as the caseids” says Dr. Markus Lambertz, zoologist at the University of Bonn and the Museum Koenig. Caseids are “mammal-like” reptiles that lived about 300-250 million years ago. Especially the barrel-shaped trunk got Dr. Lambertz’ attention. How did these reptiles breathe? Exceptional joints impeded rib motility and allowed for only limited inhalation. Calculations revealed that the ventilatory system was not that effective, but still sufficient for a sedentary grazer. Everything appeared reasonable, because ever since their first description in 1910 it was assumed that these large herbivores were something like “cows” of the Paleozoic.

Sponge-like bones as in osteoporosis

Dr. Christen Shelton of the Steinmann-Institute for Geology, Mineralogy and Paleontology of the university, however, made an important discovery. “The structure of the bone totally surprised me. They were sponge-like as in elderly,” says the now in Cape Town working scientist. But also juvenile specimens revealed the same bone architecture. It was obvious: caseids were aquatic. Whales for instance show similarly “osteoporotic-like” bone. Dr. Lambertz adds: “Suddenly, the barrel-shaped trunk with the short neck made sense. The paddle-like extremities were used for swimming.” They were apparently more the “sea cows” of the Paleozoic.

Those who live and dive in the water and forage for food or look for partners there have to regularly resurface and breathe deeply. “Aquatic vertebrates are specialists in quickly filling their lungs”, explains Prof. Dr. Steven Perry from the Institute for Zoology of the University of Bonn. Humans can move up to three quarters of their total lung volume, wales even close to all of it. However, caseids managed to move maximally only half it – not enough for a realistic adaptation to such an environment.

There had to be an “auxilliary motor” that supplemented rib breathing. Vertebrates exhibit a multitude of such mechanisms, but the authors were able to exclude each of them except for a diaphragm. And indeed, the closest living relatives of caseids are the mammals. The researchers conclude that already the least common ancestor of caseids and mammals had a diaphragm more than 300 million years ago – that is about 50 million years earlier than previously assumed. An efficient respiratory system is intertwined with the evolution of warmbloodedness, which in turn molded our entire behavior. This assumed early origin of the diaphragm now demands a reevaluation of these developments.

A fossil diaphragm probably will never be found, simply due to its bad chances to become preserved. Science, according to Prof. Perry, therefore depends on functional approximations to trace the origin of this important evolutionary novelty. Dr. Lambertz: “We still don’t know that much about these animals. It has been a long way towards mammals, but the origin of the diaphragm marked a turning point on it.”