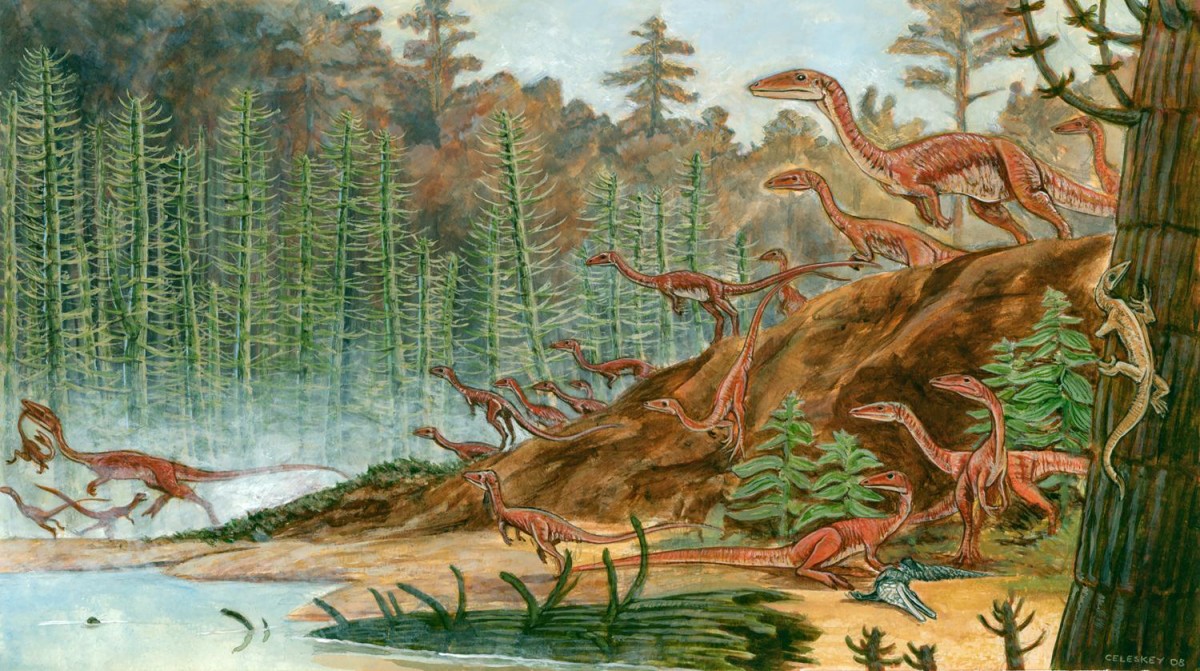 Look out your window, and you may see people of all ages and sizes roaming the street: a 6-foot-5-inch man walking beside a 4-foot-6-inch boy, for example, or a sprouting teen-ager who is much taller than a full-grown adult.

Virginia Tech geoscientists Christopher Griffin and Sterling Nesbitt discovered that this sort of variation in growth patterns in people despite their ages also occurred among early dinosaurs, and may have provided an advantage in surviving the harsh environment at the end of the Triassic Period approximately 201 million to 210 million years ago.“We found that the earliest dinosaurs had a far higher level of variation in growth patterns between individuals than crocodiles and birds, their closest living relatives,” said Griffin, of Redding, California, the lead author and a first year doctoral student in the department of geosciences in the College of Science. “Not only were there many different pathways to grow from hatchling to adult, but there was an incredible amount of variation in body size, with some small individuals far more mature than some larger individuals, and some large individuals more immature than we would guess based on size alone.”The study focused on the skeletal changes that occurred during growth in the small carnivorous dinosaur Coelophysis, one of the earliest dinosaurs. Hundreds of these animals, ranging from young, immature individuals to older, mature individuals, were buried together by a flooded river about 208 million years ago in present day New Mexico. Griffin examined 174 fossils from this site that are housed within natural history museum collections across North America.“As these animals grew, muscle attachment scars formed on the limb bones, and the bones of the ankle, hips, and shoulder fused together, similar to how the skull bones of a human baby fuse together during growth,” Griffin said. “Fossils of even a single partial skeleton of an early dinosaur are exceptionally rare, so to have an entire group of a single species that lived and died together provided an unparalleled opportunity to study early dinosaur growth like never before.”Using a technique known as ontogenetic sequence analysis, Griffin was able to reconstruct the growth sequences of Coelophysis and compare them with two bird and one crocodylian species, ultimately demonstrating that the earliest dinosaurs developed differently than their living relatives.“Studies like this are a perfect demonstration of how fossils can help us understand the evolution of peculiar features and behaviors of modern animals,” said Steve Brusatte, a paleontologist at the University of Edinburgh who was not involved in the research. “How dinosaurs grew may have been both the key to their early success and the reason that one particular unique subgroup, the birds, survives today.”This variation in early dinosaurs had been noticed for decades, but had usually been interpreted as a difference between males and females, with one sex identified by large muscle scars and fused bones.However, statistical tests on the large Coelophysis sample showed no evidence that there were two groups in the sample, as would be expected given variation based on sex, said Griffin. Instead, individuals were arranged on a spectrum ranging from completely lacking scars and fused bones to having all of them, which is what would be expected if these differences were based on growth.“Large variation in early dinosaurs may have allowed them to survive harsh environmental challenges like dry climate and high levels of carbon dioxide,” said Nesbitt, an assistant professor of geosciences in the College of Science and affiliate with the university’s Global Change Center. “Understanding why dinosaurs were so successful has been a great mystery and high variation may be one of the characteristics of dinosaurs that led to their success. However, it’s difficult to determine whether this trait evolved in response to the environment, or was simply a stroke of luck that allowed these dinosaurs to survive and thrive and become the most dominate vertebrates on Earth for 150 million years.”The discovery was published in the Proceedings of the National Academy of Sciences.