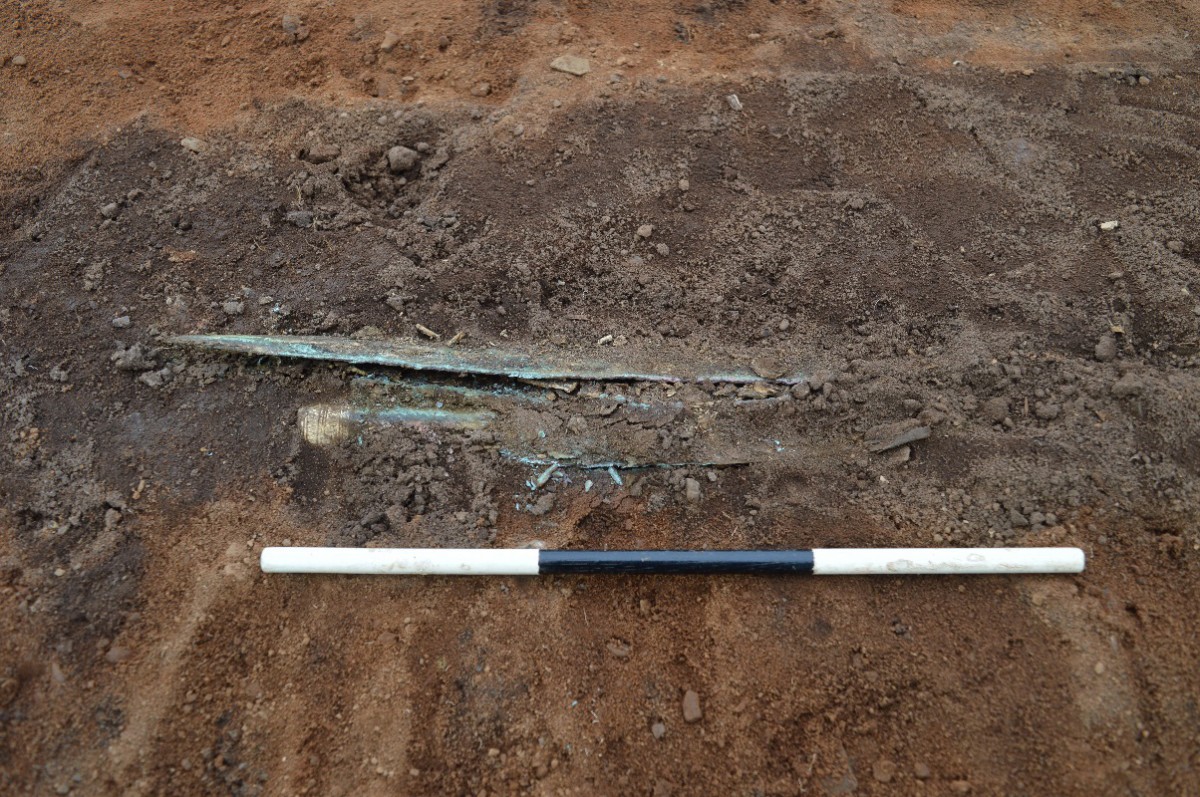 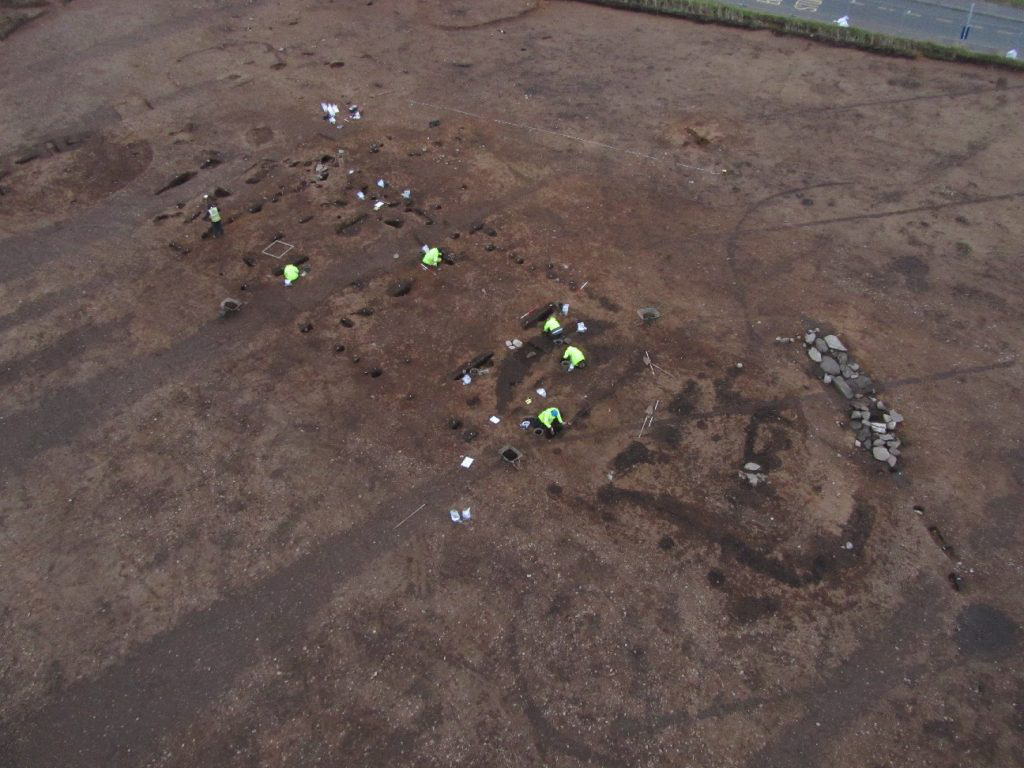 GUARD Archaeologists, working on behalf of Angus Council in advance of the construction of two football pitches at Carnoustie in Angus in Scotland, have recently discovered a major addition to Scottish Late Bronze Age archaeology.

The edge of a gold decorated bronze spearhead was first spotted in a pit during excavations by GUARD Archaeology.

‘It is very unusual to recover such artefacts in a modern archaeological excavation, which can reveal so much about the context of its burial,’ said GUARD Project Officer Alan Hunter Blair, who directed the excavation. ‘Owing to the fragile nature of these remains when we first discovered them, our team removed the entire pit, and the surrounding subsoil which it was cut into, as a single 80 kg block of soil,’ added Blair. ‘This was then delivered to our Finds Lab where it was assessed by a specialist Finds Conservator to plan how it could be carefully excavated and the artefacts conserved.’

The soil block was first CT-scanned and x-rayed by the School of Veterinary Medicine at the University of Glasgow, with assistance from Gawain Hammond, Head of the Diagnostic Imaging Unit, and his team. The scan and x-ray provided valuable information and imagery to assist in the recovery of the items from the soil block. The subsequent excavation of the soil block, at GUARD Archaeology’s Finds Lab, revealed that the spearhead was accompanied by a bronze sword, pin and scabbard fittings.

Prior to the excavation, a number of archaeological cropmarks had been recorded in the wider landscape, while immediately to the east, under what is now a housing estate, a previous archaeological excavation in 2004 had revealed extensive evidence of prehistoric and medieval activity. Taken together, this information suggested a high potential for previously unrecorded archaeology to survive within the proposed development site. An archaeological trial trenching evaluation was undertaken prior to the commencement of development works on site in order to investigate this possibility. This revealed archaeological features that then led to a much bigger excavation.

In fact the GUARD Archaeology team discovered around 1000 archaeological features, among them the remains of up to 12 sub-circular houses that probably date to the Bronze Age along with the remains of two rectilinear halls that likely date to the Neolithic period. The Neolithic features are significant in themselves, and include the largest Neolithic Hall ever found in Scotland. Embedded saddle querns and hearths were found within the interior of this timber post-built structure.

Some of the other archaeology on site consists of clusters of large pits containing discarded, broken pots and lithic artefacts. It is unclear yet if the archaeological remains comprise a settlement that lasted from the Neolithic until the Late Bronze Age or if it comprises several settlements built upon the same site but separated in time by many centuries.

The Late Bronze Age metalwork was buried in one of the pits, close to a roundhouse that cut through the large Neolithic hall. The hoard comprises a gold decorated bronze spearhead, a bronze sword, a lead and tin sword pommel, bronze scabbard mount and chape, and a bronze pin. From preliminary examination, these artefacts may date to around 1000–800 BC.

Each individual object is significant but the presence of gold ornament on the spearhead makes this an exceptional group. Gold decoration was probably added to this bronze spearhead to exalt it both through the material’s rarity and its visual impact. Some of the earliest Celtic myths often highlight the reflectivity and brilliance of heroic weapons.

Within Britain and Ireland, only a handful of such spearheads are known – among them a weapon hoard found in 1963 at Pyotdykes Farm to the west of Dundee which contained another gold decorated bronze spearhead along with two bronze swords. One of these swords was also encased in the remains of a wooden scabbard. These two weapon hoards from Angus –found only a few kilometres apart– hint at the wealth of the local warrior society during the centuries around 1000-800 BC.

The Carnoustie hoard is also unusual in that it contains extremely rare organic remains – a wooden scabbard that encased the sword blade (probably the best preserved Late Bronze Age sword scabbard ever found in Britain), fur skin around the spearhead, and textile around the pin and scabbard.

‘Organic evidence like Bronze Age wooden scabbards rarely survive on dryland sites so this just underlines how extraordinary these finds are,’ said GUARD Project Officer, Beth Spence, who undertook the excavation of the hoard in GUARD Archaeology’s Lab.

Furthermore, the hoard is not an isolated find but was buried within a Late Bronze Age settlement, which means that it will be possible to study the archaeological context of the hoard, revealing new insights into the local Bronze Age community that buried it. Not least of which was the longevity of settlement here. For the Neolithic hall, dating to around 4000 BC, that may have been as old to the people who buried the weapon hoard, as they are to the archaeologists who excavated the hoard.

The Carnoustie Bronze Age hoard is now undergoing specialist analyses by a team of finds experts from across Britain, led by GUARD Archaeology, to reveal more about the individual artefacts and the context of their burial, which may explain why this hoard was buried here.