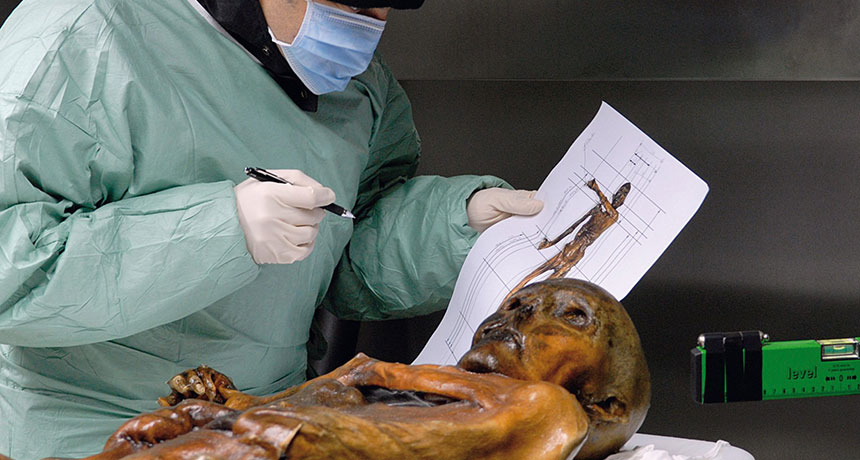 By Frank Rühli and his team from the University of Zurich

“Freezing to death is quite likely the main cause of death in this classic cold case,” according to Frank Rühli of the University of Zurich.

Since the discovery of Ötzi the Iceman in 1991, scientists have been trying to find out what caused the death of the Copper Age hunter-gatherer. Previous analysis had shown that the Iceman died of an arrow wound on his left shoulder. At the annual meeting of the American Association of Physical Anthropologists which took place on April 19-22, 2017 in New Orleans, anthropologist Frank Rühli reported that the Neolithic glacier mummy probably froze to death, possibly after suffering minor blood loss from the arrow wound. The study, which Rühli has co-authored with P. Pertner and O. Peschel and was presented at the AAPA, is entitled “Radiological and Forensic Re-evaluation of the Cause of Death of the Iceman, c. 5300 BP”.

Rühli estimates that Ötzi succumbed to exposure within anywhere from a few minutes to a few hours.

Rühli and his team have conducted a forensic analyses of Ötzi, using X-ray and CT scanning. These show a shallow penetration of the stone arrowhead into the mummy’s shoulder, which ruptured a blood vessel but caused no major tissue damage. The researchers also concluded that internal bleeding totaled only about 100 milliliters, which is enough to cause plenty of discomfort but not death, Rühli said.

The depressions and fractures on the Iceman’s skull also couldn’t have proven fatal, the anthropologist added. In contrast to researchers who believe these injuries suggest that the Iceman was clubbed to death, Rühli’s team says they were caused by accident, as the ancient man may have fallen and hit his head.

The Iceman is a uniquely well-preserved late Neolithic glacier mummy, which was found in 1991 in South Tyrol at 3,210 meters above sea level. He has undergone various scientific examinations, as human bodies are the best source for the study of life conditions in the past as well as the evolution of today’s diseases.