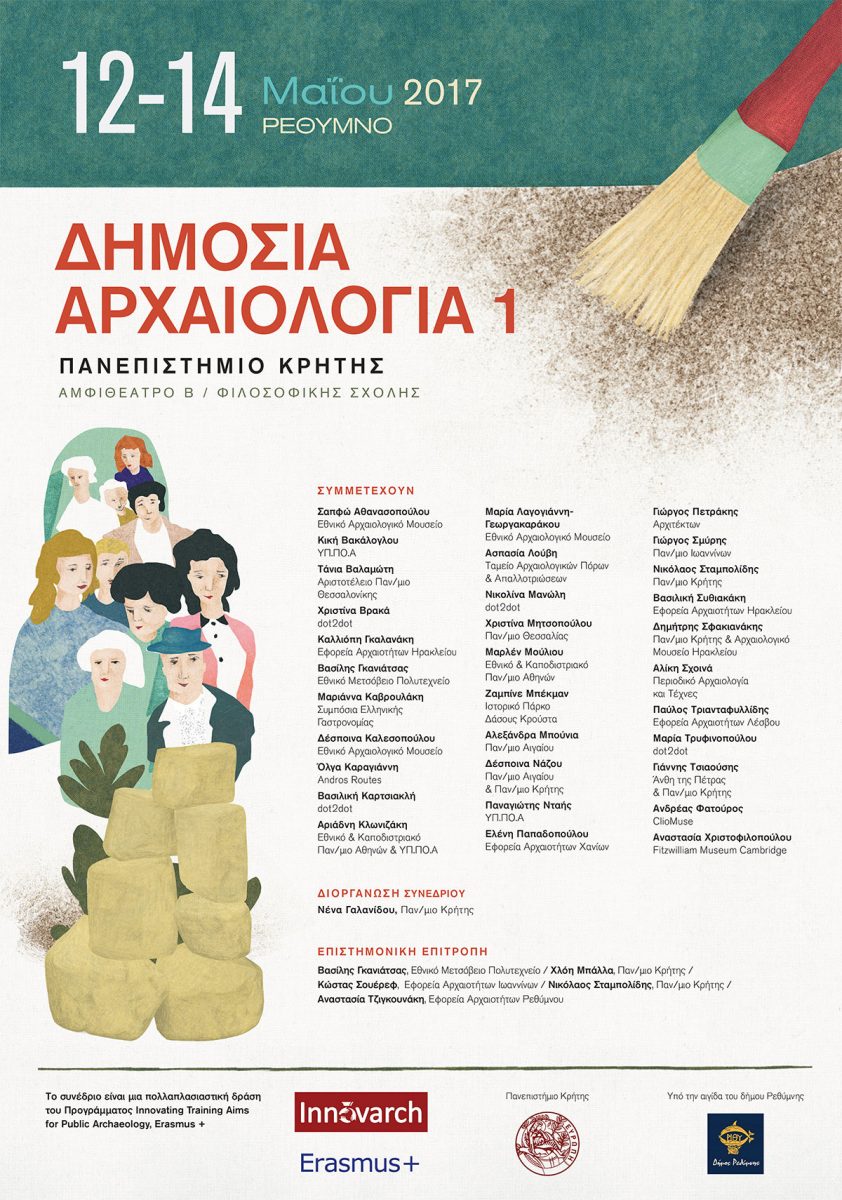 The first conference on Public Archaeology in Greece

The first conference on Public Archaeology in Greece is finally a fact. The conference that will take place from Friday May 12 until Sunday May 14, 2017, at the University of Crete gives the academic community and the civil society a chance of getting closer.

How did the conference come about? “It is a multiplier effect of a very interesting, basically educational programme funded by Erasmus+. It is called Innovarch (Innovating Training Aims for Public Archaeology) and its aim is to develop innovative teaching methods, so that it can be incorporated in the courses of Public Archaeology to be found in the curriculums of the European universities. It is a consortium of four universities coordinated by the Autonomous University of Barcelona and participating institutes the Carl Linnaeus University in Kalmar, Sweden, the University of Warsaw and the University of Crete. The latter belongs to the core of the European universities, which are working systematically towards making Public Archaeology an organic part of archaeological studies”, she adds.

And what is the originality of the conference? “It consists in the fact that a debate held for years out there in society, will now be held in the academic sphere. Our conference aims at bringing together different communities of people who have a scientific, professional or other interest for the organic linking of archaeology and the monument record with real life”, Nena Galanidou points out.

The first day of the conference is entitled “Essays of Public Archaeology” and mainly concerns academics and people working at the Archaeological Service of the Culture Ministry. The second day is entitled “The ancient heritage at the core of life and sustainable development”. It is structured in four panels coordinated by archaeologists or academics and has four specific issues. The first subject to be discussed is “Public space and monuments: architectural, archaeological, museological perspectives”, the second is “Archaeological projects and cultural routes”, the third panel is dedicated to “Archaeological guided tours: Experience, education, job creation” and the fourth panel  is related to the “Role of citizens in the protection and enhancement of cultural heritage”. “In other words, it is dedicated to all citizens’ movements aimed at building bridges between official archaeology and the public in Greece”, the Professor informs us. The third day is dedicated to the University’s pride and joy, the archaeological site and the Museum of Ancient Eleftherna.

“The second day in particular does not address only academics and archaeologists, but also all interested parts related to ancient heritage. This means that we bring together people from museums and universities, archaeologists, architects, museologists, teachers, people working at the Culture Ministry, people who have set up start-ups for guided tours or digital services, guides and others who are trying to create the necessary conditions for a sustainable economic development and the creation of jobs, by making use and respecting archaeology and archaeological remains”, she adds.

Does Public Archaeology bring something new and what is it? “Until now archaeological ‘issues’ were regarded solely a concern of the scientific community. However, scientists are not the only ones who are interested, who have a say and the right to deal with ‘antiquities’.  There are also all the citizens who, in their way, are participating, helping, defending protection, enhancement and good use of archaeological heritage, whether as volunteers or as professionals. In other words, man is at the centre of Public Archaeology, in the light of the interaction of the archaeological community which should come out from its space of research in order to meet, listen and talk to the communities of the present” Mrs. Galanidou concludes.