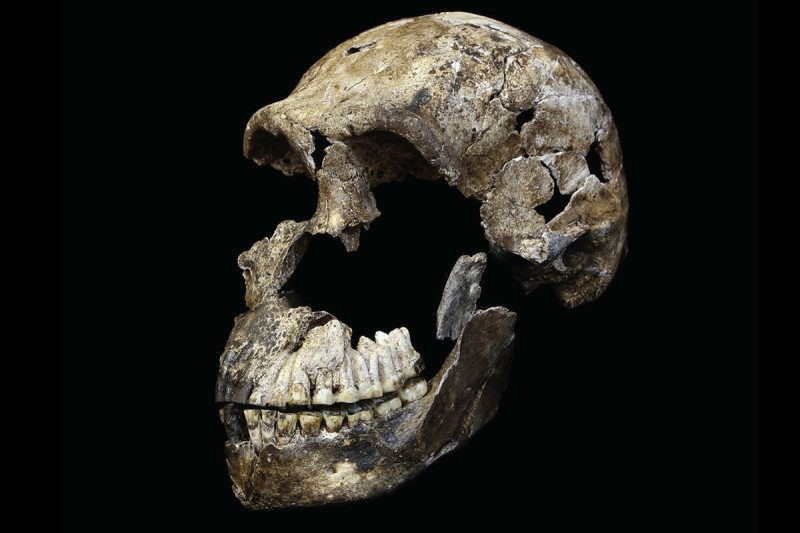 The Rising Star Cave system in South Africa has revealed yet more important discoveries, only a year and a half after it was announced that the richest fossil hominin site in Africa had been discovered, and that it contained a new hominin species named Homo naledi by the scientists who described it.

The age of the original Homo naledi remains from the Dinaledi Chamber has been revealed to be startlingly young in age. Homo naledi, which was first announced in September 2015, was alive sometime between 335 and 236 thousand years ago. This places this population of primitive small-brained hominins at a time and place that it is likely they lived alongside Homo sapiens. This is the first time that it has been demonstrated that another species of hominin survived alongside the first humans in Africa.

The research, published today in three papers in the journal eLife, presents the long-awaited age of the naledi fossils from the Dinaledi Chamber and announces the new discovery of a second chamber in the Rising Star cave system, containing additional specimens of Homo naledi. These include a child and a partial skeleton of an adult male with a remarkably well-preserved skull.

The new discovery and research was done by a large team of researchers from the University of the Witwatersrand (Wits) (South Africa), James Cook University (Australia), the University of Wisconsin (Madison, United States), and more than 30 additional international institutions have today announced two major discoveries related to the fossil hominin species Homo naledi.

The team was led by Professor Lee Berger of the Evolutionary Studies Institute at Wits University in Johannesburg, South Africa, and a National Geographic Explorer in Residence. The discovery of the second chamber with abundant Homo naledi fossils includes one of the most complete skeletons of a hominin ever discovered, as well as the remains of at least one child and another adult. The discovery of a second chamber has led the team to argue that there is more support for the controversial hypothesis that Homo naledi deliberately disposed of its dead in these remote, hard to reach caverns.

The dating of Homo naledi is the conclusion of the multi-authored paper entitled: The age of Homo naledi and associated sediments in the Rising Star Cave, South Africa, led by Professor Paul Dirks of James Cook University and Wits University.

The naledi date is surprisingly recent. The fossil remains have primitive features that are shared with some of the earliest known fossil members of our genus, such as Homo rudolfensis and Homo habilis, species that lived nearly two million years ago. On the other hand, however, it also shares some features with modern humans. After the description of the new species in 2015, experts had predicted that the fossils should be around the age of these other primitive species. Instead, the fossils from the Dinaledi Chamber are barely more than one-tenth that age.

“The dating of naledi was extremely challenging,” noted Dirks, who worked with 19 other scientists from laboratories and institutions around the world, including labs in South Africa and Australia, to establish the age of the fossils. “Eventually, six independent dating methods allowed us to constrain the age of this population of Homo naledi to a period known as the late Middle Pleistocene.”

The age for this population of hominins shows that Homo naledi may have survived for as long as two million years alongside other species of hominins in Africa. At such a young age, in a period known as the late Middle Pleistocene, it was previously thought that only Homo sapiens (modern humans) existed in Africa.

More critically, it is at precisely this time that we see the rise of what has been called “modern human behaviour” in southern Africa – behaviour attributed, until now, to the rise of modern humans and thought to represent the origins of complex modern human activities such as burial of the dead, self-adornment and complex tools.

The team used a combination of optically stimulated luminescence dating of sediments with Uranium-Thorium dating and palaeomagnetic analyses of flowstones to establish how the sediments relate to the geological timescale in the Dinaledi Chamber.

Dr Hannah Hilbert-Wolf, a geologist from James Cook University who also worked on the Dinaledi Chamber, noted that it was crucial to figure out how the sediments within the Dinaledi Chamber are layered, in order to build a framework for understanding all of the dates obtained.

“Of course we were surprised at the young age, but as we realised that all the geological formations in the chamber were young, the U-series and ESR results were perhaps less of a surprise in the end,” added Professor Eric Roberts, from James Cook University and Wits, who is one of the few geologists to have ever entered the Dinaledi Chamber, due to the tight 18cm-wide constraints of the entrance chute.

Dr Marina Elliott, Exploration Scientist at Wits and one of the original “underground astronauts” on the 2013 Rising Star Expedition, says she had always felt that the naledi fossils were ‘young’. “I’ve excavated hundreds of the bones of Homo naledi, and from the first one I touched, I realised that there was something different about the preservation, that they appeared hardly fossilised.”

In an accompanying paper, led by Berger, entitled Homo naledi and Pleistocene hominin evolution in subequatorial Africa, the team discusses the importance of finding such a primitive species at such a time and place. They noted that the discovery will have a significant impact on our interpretation of archaeological assemblages and understanding which species made them.

“We can no longer assume that we know which species made which tools, or even assume that it was modern humans that were the innovators of some of these critical technological and behavioural breakthroughs in the archaeological record of Africa,” says Berger. “If there is one other species out there that shared the world with ‘modern humans’ in Africa, it is very likely there are others. We just need to find them.”

John Hawks of the University of Wisconsin-Madison and Wits University, an author on all three papers, says: “I think some scientists assumed they knew how human evolution happened, but these new fossil discoveries, plus what we know from genetics, tell us that the southern half of Africa was home to a diversity that we’ve never seen anywhere else”.

“Recently, the fossil hominin record has been full of surprises, and the age of Homo naledi is not going to be the last surprise that comes out of these caves I suspect,” adds Berger.

“The chamber, which we have named the Lesedi Chamber, is more than a hundred meters from the Dinaledi Chamber. It is almost as difficult to access, and also contains spectacular fossils of naledi, including a partial skeleton with a wonderfully complete skull,” says Hawks, lead author on the paper describing the new discovery. Fossil remains were first recognised in the chamber by Rick Hunter and Steven Tucker in 2013, as fieldwork was underway in the Dinaledi Chamber.

The name “Lesedi” means “light” in the Setswana language. Excavations in the Lesedi Chamber began later, and would take nearly three years.

Hawks points out that while the Lesedi Chamber is “easier” to get into than the Dinaledi Chamber, the term is relative. “I have never been inside either of the chambers, and never will be. In fact, I watched Lee Berger being stuck for almost an hour, trying to get out of the narrow underground squeeze of the Lesedi Chamber.” Berger eventually had to be extracted using ropes tied to his wrists.

The presence of a second chamber, distant from the first, containing multiple individuals of Homo naledi and almost as difficult to reach as the Dinaledi Chamber, gives an idea of the extraordinary effort it took for Homo naledi to reach these hard-to-get-to places, says Hilbert-Wolf.

“This likely adds weight to the hypothesis that Homo naledi was using dark, remote places to cache its dead,” says Hawks. “What are the odds of a second, almost identical occurrence happening by chance?”

So far, the scientists have uncovered more than 130 hominin specimens from the Lesedi Chamber. The bones belong to at least three individuals, but Elliot believes that there are more fossils yet to be discovered. Among the individuals are the skeletal remains of two adults and at least one child. The child is represented by bones of the head and body and would likely have been under five years of age.  Of the two adults, one is represented by only a jaw and leg elements, but the other is represented by a partial skeleton, including a mostly complete skull.

The team describes the skull of the skeleton as “spectacularly complete”.

“We finally get a look at the face of Homo naledi,” says Peter Schmid of Wits and the University of Zurich, who spent hundreds of hours painstakingly reconstructing the fragile bones to complete the reconstruction.

The skeleton was nicknamed “Neo” by the team, chosen for the Sesotho word meaning “a gift”.

“The skeleton of Neo is one the most complete ever discovered, and technically even more complete than the famous Lucy fossil, given the preservation of the skull and mandible,” says Berger.

The specimens from the Lesedi Chamber are nearly identical in every way to those from the Dinaledi Chamber, a remarkable finding in and of itself.

“There is no doubt that they belong to the same species,” says Hawks.

The Lesedi Chamber fossils have not been dated yet, as dating would require destruction of some of the hominin material. “Once described, we will look at the way forward for establishing the age of these particular fossils,” says Dirks. Elliot adds, however, that as the preservation and condition of the finds are practically identical to that of the naledi specimens from the Dinaledi Chamber the team hypothesizes that their age will fall roughly within the same time period.

Decades of research still ahead

Berger believes that with thousands of fossils likely remaining in both the Lesedi and Dinaledi Chambers, there are decades of research potential. “We are going to treat ongoing extraction of material from both of these chambers with extreme care and thoughtfulness and with the full knowledge that we need to conserve material for future generations of scientists, and future technological innovations,” he says.

52 scientists from 35 departments and Institutions were involved in the research.

Wits Vice-Chancellor and Principal, Professor Adam Habib said: “The search for human origins on the continent of Africa began at Wits and it is wonderful to see this legacy continue with such important discoveries”

“The National Geographic Society has a long history of investing in bold people and transformative ideas,” said Gary E. Knell, president and CEO of the National Geographic Society that funded the expeditions that recovered the fossils and established their age. “The continued discoveries from Berger and his colleagues showcase why it is critical to support the study of our human origins and other pressing scientific questions.”

The original fossils of these new discoveries, as well as those from the original Rising Star Expedition will be put on public display at the Maropeng, the Official Visitors Centre for the Cradle of Humankind World Heritage Site, from 25 May 2017 onwards.

This exhibit of the largest display of original fossil hominin material in history forms part of an exhibition called “Almost Human”.

The exhibition will be housed in ‘The Gallery’ – a state-of-the-art exhibition space built as part of the Gauteng Infrastructure Upgrade Project. This is the second completed construction, the first being the upgrade to the Hominin House facilities at Maropeng.