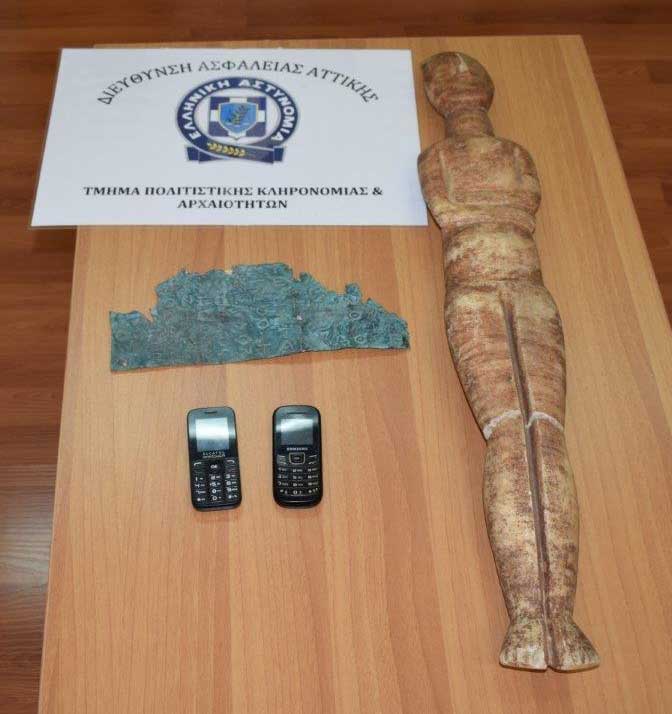 A very rare Cycladic figurine and an ancient inscription

A 46-year-old man was arrested in Alimos of Attica by policemen of the Department of Cultural Heritage and Antiquities of Attica Security Directorate, accused for the illicit possession and transfer of ancient movable monuments of great value.

After several months of investigations in order to identify a man who possessed an extremely rare Cycladic figurine and an ancient inscription, which he was trying to sell for 1,000,000 €, the 46-year-old man was detected in a parking lot near Marina Alimos in Attica.

After investigating a backpack of the man, two ancient artefacts were found and confiscated, which were then shown to an archaeologist of the Department of Documentation and Protection of Cultural Goods of the Ministry of Culture and Sports. According to the archaeologist the artifact is a female figurine of Protocycladic period, dating back to 2800-2300 BC and consisting of three joining parts, having a total length of 80 cm. The figurine is of great archaeological value. The Bronze foil inscription has a total length of 30 cm and a max. height of 13 cm. Both artefacts fall under the protective provisions of the legislation about the protection of antiquities and cultural heritage in general.