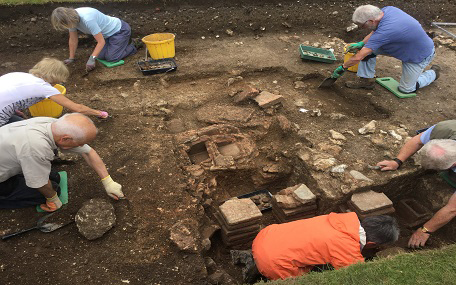 James Kenny, Archaeologist at Chichester District Council, said that it was “a once in a life time opportunity for local archaeological volunteers to uncover a find like this.”

The remains of three Roman buildings were originally identified under Chichester’s Priory Park, using ground penetrating radar equipment and a small dig was originally carried out to confirm this.

This week’s archaeological dig aimed to explore the area in more detail and to uncover the secrets of the third building, which had an unusual shape.

The dig has revealed that there were two Roman townhouses on the site —one of which had its own private bath house— which would have been owned by someone of great wealth and importance.

“We know that this has created a lot of interest and local residents are intrigued by what has been discovered on their doorstep and so we have enjoyed giving people the opportunity to visit the site and see the discoveries.

“Chichester’s rich Roman history already attracts people from far and wide, due to its city walls and its public Roman Bath House, which is located in our Novium Museum. We hope that these further discoveries will encourage even more people to visit our beautiful city.”

James Kenny, Chichester District Council’s archaeologist, has been working solidly for over a week with the help of Chichester and District Archaeology Society to uncover the secrets beneath Priory Park.

“What’s remarkable about this discovery is that it has survived over 1,000 years in an occupied city. This is because they are under a park that has never been built on,” says James.

“It’s almost unique to see Roman remains survive in this type of setting and to be so complete.

“What we’ve found is a hot room from a very small, private bath suite that would have gone with an extremely well appointed, luxurious town house. These properties would have definitely have been owned by the richest people in the city.

“The location definitely marks one of the most affluent parts of the Roman Town, with these houses being the equivalent of a property worth millions of pounds in today’s society. Only someone who was incredibly wealthy could have owned a bath house like this and paid for it to be maintained. They would have either made their money out of commerce and trading, or were a member of the local aristocracy.

“We don’t know the date of the site yet, but it was probably 3rd or 4th century AD. This was quite late in the history of Roman Chichester — but at the time when it was in its heyday.

“The scans show that the two houses have walls surrounding complete rooms, which may be set around a courtyard or atrium. There is also a deep masonry building with a rounded end, which we now know is a private bath house.”

James believes that the houses were originally located on a street, but that this hasn’t survived because of the World War Two reservoir that was built in the park. The scans reveal that another Roman street ran further east under Priory Park, but this will not be uncovered.

“We now hope to use the evidence that we have gathered to bid for money to fund future excavations, which will focus on one of the town houses,” says James.

“This discovery is a unique part of Chichester’s history, and so we’ve really enjoyed speaking to lots of people who have visited the site to see the dig take place. Chichester has such a wealth of history and so it is great that people are so interested in it.

“We do not plan to keep the remains on permanent display — when the work has been completed we will return the ground to its current state. Instead, the likelihood is that we will create information that will provide people with all of the information that they need in the long term,” he adds.