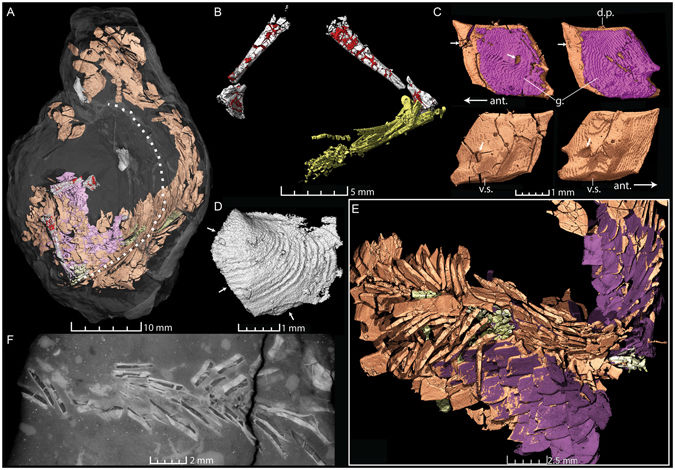 Visualizing their internal structure and reconstructing their contents

Synchrotron scanning can produce high-quality 3D models of well-preserved food residues from fossil faeces. That’s the result of a new study, by palaeontologists from Uppsala University and from ESRF Grenoble, which is presented in a new article in Scientific Reports.

Examples from two faeces of Triassic age (230 million years old) include delicate remains of beetles in one, and a half-complete fish and fragments of crushed bivalves in the other.

Large and impressive fossils from carnivorous dinosaurs like Tyrannosaurus rex are famous the world over. Fossilized faeces do not have the same iconic status, but in fact faeces are often preserved as fossils, when they are known as coprolites. Coprolites contain information about the lifestyle and diet of the animal that cannot be obtained from studying its skeleton.

The true nature of coprolites was described by the Englishman William Buckland already in the 19th century, but since then they have not become as well-studied as other types of fossils. However, in recent years, several astonishing fossil remains from food, parasites or other involuntarily swallowed objects have been described from coprolites. A major problem has nevertheless persisted: most of these findings are based on 2-dimensional cross-sections of the coprolites, obtained by cutting them into slices, and thus a large part of the specimen is not analyzed and many inclusions remain unrecognizable.

Researchers from Uppsala University in Sweden and the European Synchrotron Radiation Facility (ESRF) in France decided to try imaging coprolite contents in three dimensions, non-destructively, by means of synchrotron tomography. This works much like a CT scanner in a hospital, with the difference that the energy in the x-ray beams is thousands of times stronger. In this way, it is possible to visualize the internal structure of fossil faeces and reconstruct their contents, which has never previously been possible.

The contents of two 230 million year old coprolites from Poland are presented as examples of the technique. One contains only beetle remains. Two wing cases and part of a leg, representing three different species, are all beautifully preserved and three-dimensional. It seems that the coprolite producer was an animal specialized in eating beetles. The second specimen contains crushed clam shells and a partial body of a fish. A large lungfish known from the site is the most likely candidate for producing this coprolite.

“We have so far only seen the top of the iceberg” says PhD student Martin Qvarnström, lead author of the study; “The next step will be to analyze all types of coprolites from the same fossil locality in order to work out who ate what (or whom) and understand the interactions within the ecosystem”.