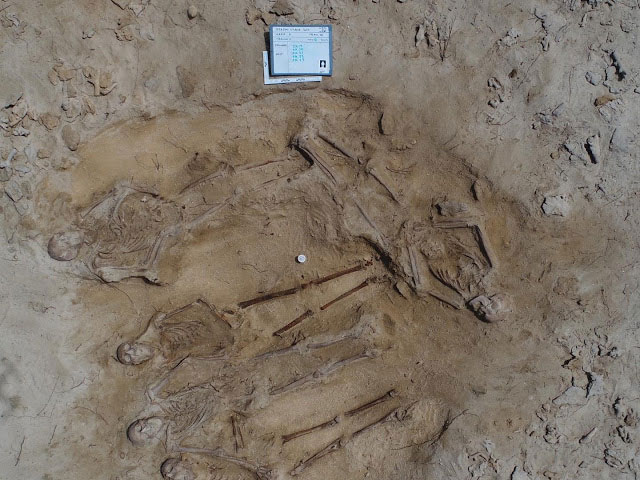 On the Morning Reef off the Western Australian coast

An international team of archaeologists, including scientists from The University of Western Australia and the Western Australian Museum, has discovered a new communal grave in the Abrolhos Islands, the result of deaths after a shipwreck of the Dutch East India company ship Batavia.

The Batavia was wrecked in 1629 on the Morning Reef off the Western Australian coast. The 282 survivors ended up on a small coral island termed ‘Batavia’s Graveyard’ – Beacon Island. In the following months a mutiny unfolded, leading to the deaths of around 115 people, many of whom were murdered by the mutineers.

The communal grave was discovered earlier this month and was made up of five sets of human remains, along with artefacts.

UWA Associate Professor Daniel Franklin said the discovery followed earlier findings on Beacon Island, which is part of the Abrolhos group of islands about 60km west of Geraldton, off WA’s mid-west coast.

“A total of 10 individuals have been discovered in a central part of Beacon Island in the past three years during our research project, providing valuable new information about the events following the wreck of the Batavia,” Associate Professor Franklin said.

UWA Professor Alistair Paterson, who leads the international collaboration of researchers with Jeremy Green from the WA Museum, said the discovery of the new grave had unearthed vital clues about what happened on Beacon Island almost 400 years ago.

“These may be people who died in the days following the wreck but before the mutiny and mass killings were under way.”

Dr Liesbeth Smits from the University of Amsterdam, who excavated the latest discoveries, said the bones would now be tested to discover more about them.

“Isotopic analyses are allowing us to determine where these people originated from,” Dr Smits said.

“Surprisingly many of them did not come from Holland, but moved there to join the ships of the Dutch East India Company.”

Mr Green is Head of Maritime Archaeology at the WA Museum. He has been investigating the Batavia and the story of its survivors since the wreck’s discovery more than 50 years ago, and led the excavation of the wreck site in the 1970s.

“This latest find adds significantly to the wealth of information we have on Batavia, and shows that there are still very important discoveries to be made about the remarkable human story behind one of Australia’s oldest known shipwrecks,” he said.