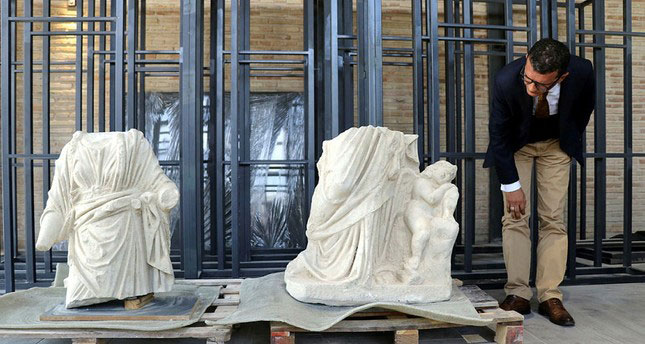 During excavations in the ancient city of Anazarbos

During excavations in the Ancient City of Anazarbos, known as Anavarza in Turkish, in the southern province of Adana, archaeologists found a sculpture of the goddess Hygieia and god Eros.

The limestone sculpture is headless and broken into two parts. It is believed to date back to the 3rd or 4th c. BC.
The discovery will shed light to the city’s rich history. “The famous pharmacologist Dioskurides, who worked in the army during the Roman period and who attracted attention with the medicines he made, lived in Anavarza,” said Nedim Dervişoğlu, Director of the Adana Museum.
Finding a statue of Hygieia, the goddess of physical and mental health, suggests that Anavarza was a city where medicine and pharmacology developed, archaeologists believe.

About the city of Anazarbos

Anazarbos was one of the metropolises of the ancient time, which gradually strengthened in Roman times, such that in the 2nd c. AD was competing with Tarsus, the megacity of the ancient times. Many monumental structures like triumphal arches, roads with columns, theater, amphitheater, stadium, temples, rock-cut tombs were constructed in this era.
The noted first historical events about Anazarbos and its vicinity are dated back to the 1st century BC, extracted through the coins with the scripts of ‘Anazarbeon’. The Romans, who sovereigned the whole Mediterranean in this period, has left the ruling of the Ceyhan basin to an old pirate leader Tarkondimotos after the famous operation that General Pompeius subdued the pirates. Most of the pirates were killed, while the left were taken under control by settling them in a number of places. The capital of this region where Tarkondimotos has been appointed as a vassal king was Hierapolis-Kastabala. After a short period, in 19 AD, the city of Anazarbos was founded during the great Roman emperor Augustus’ visit to Tarkondimotos and its name was dedicated to Agustus as Kaisareia. By then, the capital Hierapolis-Kastabala kept its importance as a religious centre in the region, while Anazarbos started to coming into prominence as the political and economic centre of the Tarkondimotos Kingdom.

The mid of the 2nd century AD is the time that heyday of Anazarbos has begun. After the end of the civil war in Roman Empire in the end of the century, cities of Cilica Pedias (East Cilicia – Cilicia in plain) were considered ideal for billeting for Roman army during the war against Parths. Anazarbos, in this manner, has come into force as one of the cities where Roman army was supported logistically during Parth campaigns.

Emperor Septimius Severus, who was supported by Anazarbos during the civil war, honoured the city in return as “neokoros” in the years of 198 and 203, and as “metropolis” in 204. Subsequently, festivals and sport games namely “Severeia Olympia Epineikia” and “Severeia Philadelphia” were organized in honour of the emperor. While the city has the privilege for constructing the imperial cult by gaining the designation of “neokoros”, it has also been qualified for being the leader in the state assembly which started to gather in Anazarbos from 204. Traianus Decius, who was the emperor between the years of 249 and 251, entitled the city as “neokoros” for the third time and privileged it for arranging “Dekios Oikumenikos” games.

Heyday of Anazarbos continued forthcoming years and it achieved to be the most important city in the whole region. Prosperity emerged in the first half of the 3rd century AD reflected on the architecture of the city and resulted in raising a magnificent city also with the contribution of the emperors.

260’s is a period which the whole region was invaded by Sasanians. The King Shapur plundered many cities including Anazarbos and left quite deplorable marks in the region. However, activities and leadership claim of Anazarbos continued by then, even its competence with Tarsus lasted at the highest level. This competition is also stated as the reason for division of Cilicia into two states in the II. Theodisius period, as a result of which, Tarsus has been the capital of Cilicia Prima while Anazarbos has been the capital of Cilicia Secunda.

The city suffered from earthquakes in 525 and 561 and rebuilt by the emperors of the period, Justinius and Justinianus. During the 7th and 8th centuries AD it was invaded by the Arabs, and changed between the Byzantium and Arabs for the forthcoming centuries. In 964 it was seized by Nikephoros Phokas and taken within the boundaries of Byzantium again. In the 11th century, it was captured by the Armenians who came to Cilician plain escaping from Alparslan and recognized as the capital by I. Toros. Since 1375, after the conquest of the region by Memluks, Cilicia Plain has been inhabited by Turks.