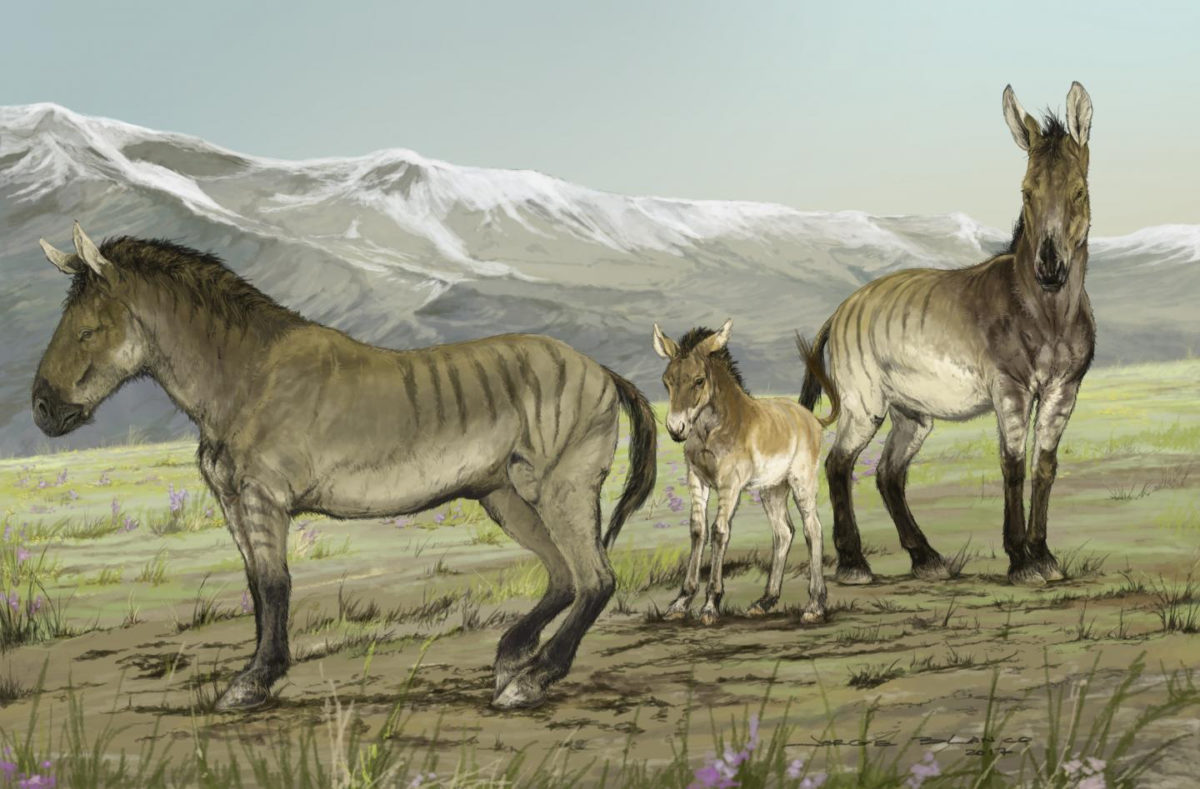 An international team of researchers has discovered a previously unrecognized genus of extinct horses that roamed North America during the last ice age.

The new findings, published November 28 in the journal eLife, are based on an analysis of ancient DNA from fossils of the enigmatic “New World stilt-legged horse” excavated from sites such as Natural Trap Cave in Wyoming, Gypsum Cave in Nevada, and the Klondike goldfields of Canada’s Yukon Territory.

Prior to this study, these thin-limbed, lightly built horses were thought to be related to the Asiatic wild ass or onager, or simply a separate species within the genus Equus, which includes living horses, asses, and zebras. The new results, however, reveal that these horses were not closely related to any living population of horses.

Now named Haringtonhippus francisci, this extinct species of North American horse appears to have diverged from the main trunk of the family tree leading to Equus some 4 to 6 million years ago.

“The horse family, thanks to its rich and deep fossil record, has been a model system for understanding and teaching evolution. Now ancient DNA has rewritten the evolutionary history of this iconic group,” said first author Peter Heintzman, who led the study as a postdoctoral researcher at UC Santa Cruz.

“The evolutionary distance between the extinct stilt-legged horses and all living horses took us by surprise, but it presented us with an exciting opportunity to name a new genus of horse,” said senior author Beth Shapiro, professor of ecology and evolutionary biology at UC Santa Cruz.

The team named the new horse after Richard Harington, emeritus curator of Quaternary Paleontology at the Canadian Museum of Nature in Ottawa. Harington, who was not involved in the study, spent his career studying the ice age fossils of Canada’s North and first described the stilt-legged horses in the early 1970s.

“I had been curious for many years concerning the identity of two horse metatarsal bones I collected, one from Klondike, Yukon, and the other from Lost Chicken Creek, Alaska. They looked like those of modern Asiatic kiangs, but thanks to the research of my esteemed colleagues they are now known to belong to a new genus,” said Harington. “I am delighted to have this new genus named after me. ”

The new findings show that Haringtonhippus francisci was a widespread and successful species throughout much of North America, living alongside populations of Equus but not interbreeding with them. In Canada’s North, Haringtonhippus survived until roughly 17,000 years ago, more than 19,000 years later than previously known from this region.

At the end of the last ice age, both horse groups became extinct in North America, along with other large animals like woolly mammoths and saber-toothed cats. Although Equus survived in Eurasia after the last ice age, eventually leading to domestic horses, the stilt-legged Haringtonhippus was an evolutionary dead end.

“We are very pleased to name this new horse genus after our friend and colleague Dick Harington. There is no other scientist who has had greater impact in the field of ice age paleontology in Canada than Dick,” said coauthor Grant Zazula, a Government of Yukon paleontologist. “Our research on fossils such as these horses would not be possible without Dick’s life-long dedication to working closely with the Klondike gold miners and local First Nations communities in Canada’s North”.

Coauthor Eric Scott, a paleontologist at California State University San Bernardino, said that morphologically, the fossils of Haringtonhippus are not all that different from those of Equus. “But the DNA tells a fascinatingly different story altogether,” he said. “That’s what is so impressive about these findings. It took getting down to the molecular level to discern this new genus.”