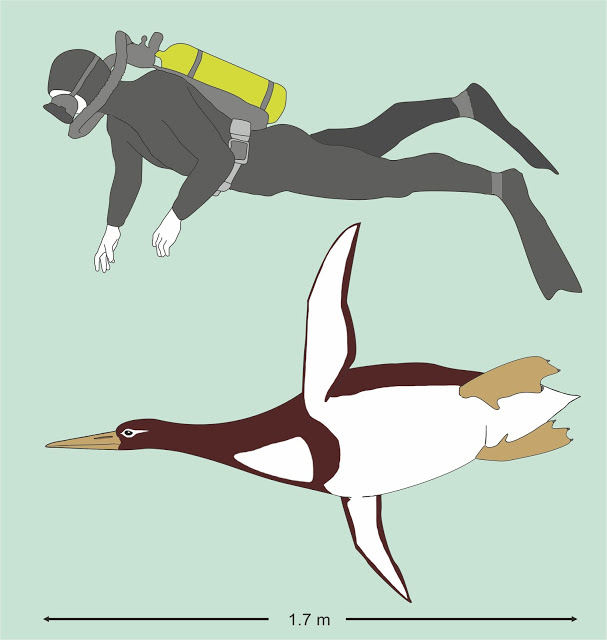 'Gigantism' probably as a result of the birds’ flightlessness

Together with a team from New Zealand, Senckenberg scientist Dr. Gerald Mayr described a hitherto unknown fossil giant penguin species. The excavated bones indicate that the penguin stood over 1.7 meters tall in life and reached a body weight of approx. 100 kilograms. In their study, published today in the scientific journal Nature Communications, the researchers show that throughout geological history, “gigantism” was not a rare occurrence in early penguins and probably developed as a result of the birds’ flightlessness.

In the Maori language, Kumi means “monster” and manu is the word for “bird” – thus, it can already be deduced from the newly discovered fossil penguin’s scientific name that this involves no ordinary discovery.

“We examined the wing and leg bones of this penguin and quickly realized that we were looking at a previously unknown species,” explains Dr. Gerald Mayr of the Senckenberg Research Institute in Frankfurt, and he continues, “The size of the bones indicates that this species stood over 1.7 meters tall and weighed more than 100 kilograms.”

The new discovery thus counts among the largest fossil penguin species, only surpassed in body size by a fossil species from Antarctica, which, however, is only known from very fragmented remains.

The giant penguin’s fossilized remnants were found in the Otago region on New Zealand’s South Island. “Age datings reveal that the bird lived during the Late Paleocene, i.e., about 59 to 56 million years ago,” explains Mayr, and he adds, “The fossils are therefore among the oldest known penguin remains, and it is remarkable that even these early forms reached such an enormous size.”

In the study, the ornithologist from Frankfurt and his colleagues from New Zealand further demonstrate that phylogenetically, the new discovery represents a rather archaic species, which is clearly differentiated from the giant penguins known to date from the geologically younger epochs of the Eocene and Oligocene. “Kumimanu shows that gigantism was not rare among early penguins, even at the earliest stage of their evolution,” adds Mayr.

The scientists assume that this gigantism developed as a result of the seabirds’ flightlessness. This raises the question why no penguin giants are alive today. The researchers offer the following hypothesis: “Giant penguins developed shortly after the mass extinction near the end of the Cretaceous, approx. 66 million years ago. It is possible that the disappearance of large marine reptiles enabled the penguins to explore new ecological niches. However, with the subsequent appearance of other large marine predators such as seals and toothed whales, the penguins faced new competition and predation – which may have led to their extinction.” The Senckenberg scientist and his colleagues now hope for additional discoveries that can shed light on this and other new questions.