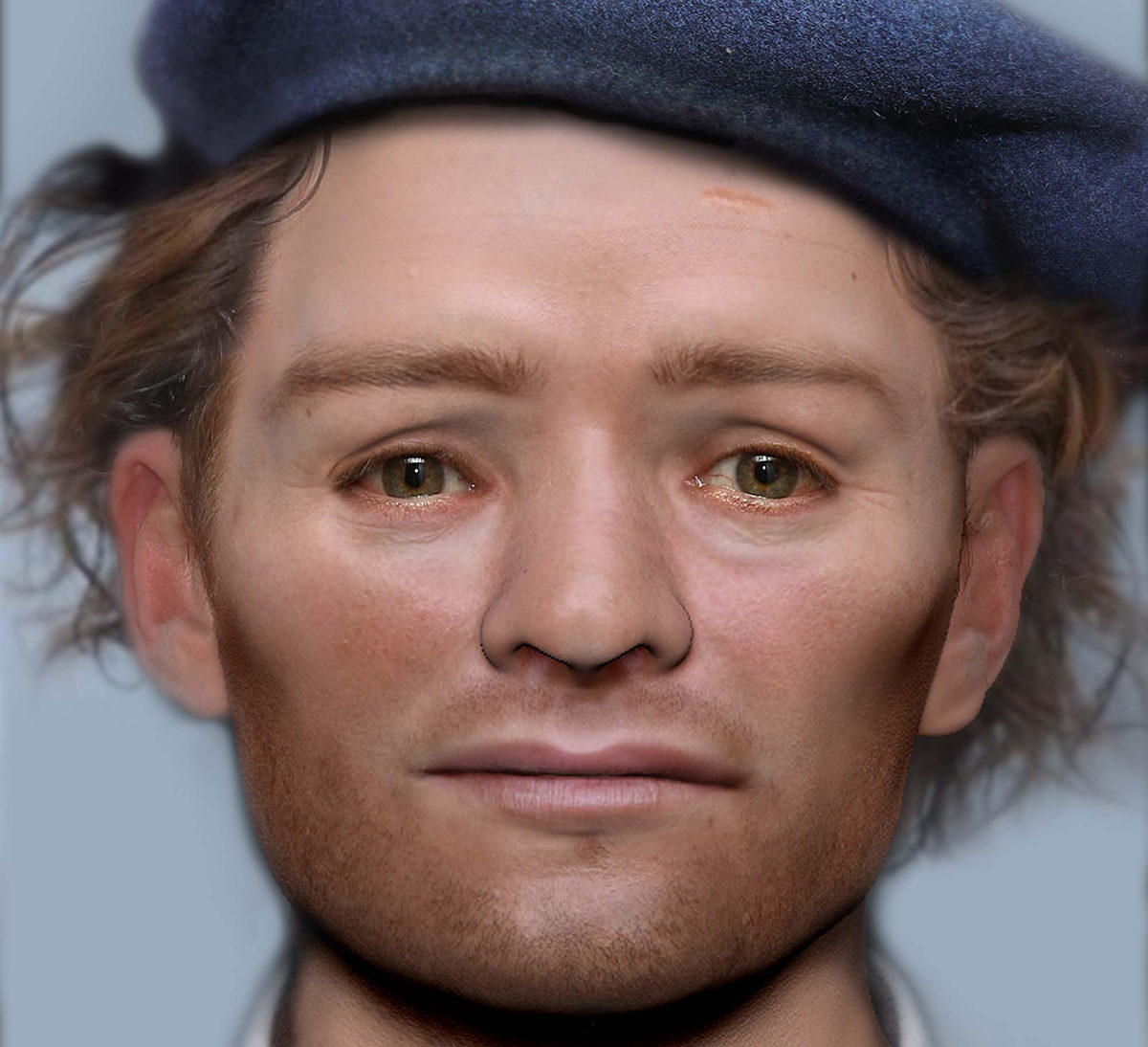 Thanks to digital modelling software

The face of one of the Seventeenth Century Scottish soldiers who was imprisoned and died in Durham following the Battle of Dunbar in 1650 has been revealed through a remarkable new digital reconstruction.

The images and video have been created from the skull of one of the skeletons, found in Durham in November 2013.

Looking into the past

Following the discovery in 2013 Durham University has continued to conduct research on the remains, using a host of modern archaeological techniques to learn as much as possible about these individuals.

To complement this work the university asked experts at Face Lab, based at Liverpool John Moores University, to create a digital reconstruction of one of the skulls.

Professor Chris Gerrard, of Durham University’s Department of Archaeology and Project Lead for the Scottish Soldiers Archaeology Project, said: “Durham University wanted to work with Face Lab as they specialise in the reconstruction of faces for archaeological and forensic purposes.

“We wanted to take our research into these individuals one step further and really help people to relate to the Scottish soldiers.

“The resulting image is a poignant opportunity to come face to face with a young man who lived and died over 300 years ago.”

The process of developing the reconstruction included careful re-assembly of the skull to allow for a detailed digital scan to be undertaken by experts from Face Lab.

The digital scan was then used, together with information from Durham University’s research on the age of the individual at death, to build up the facial features.

A previously unidentified facial scar on the individual was identified through the scanning process and has been included in the final image.

“This combines 3D craniofacial depiction system with digital modelling software and facial and anatomical datasets, which can provide the most accurate and lifelike, images of an array of fascinating archaeological and forensic art depictions.

“In this case, our collaboration with Durham University enabled us to draw on scans and data to create the most accurate and lifelike image possible to enable a true glimpse into the past of this Scottish soldier and how his life had been lived.

“It will join a collection of work by Face Lab reconstructing historical figures including Robert the Bruce, Richard III and St Nicholas.”

The soldier is depicted wearing the blue bonnet, brown jacket and shirt typical of Scottish soldiers of the time.

The reconstruction is based on the skull of a male, known only to the project team as ‘Skeleton 22’.

Analysis of Skeleton 22, led by experts at Durham University, has also uncovered that the he was aged between 18 and 25 when he died, had suffered periods of poor nutrition during childhood and had lived in South West Scotland during the 1630s.

Professor Chris Gerrard said: “Analysis of the dental calculus has revealed a lot about the conditions in which this man, known to us only as ‘Skeleton 22’, grew up.

“This information combined with the digital facial reconstruction gives us a remarkable, and privileged, glimpse into this individual’s past.”

A full osteobiography (based on a study of both the remains and documentary evidence) of Skeleton 22 and description of how the digital reconstruction was undertaken are available online.

The remains of the Scottish soldiers were originally discovered in November 2013, on Palace Green on Durham City’s UNESCO World Heritage Site.

Analysis by experts from Durham University’s Department of Archaeology concluded that they were those of Scottish soldiers taken prisoner after the 1650 Battle of Dunbar, solving a near 400 year old mystery about what became of those soldiers who died in Durham.

Research on the remains, led by the University’s Department of Archaeology, is ongoing and the team is combining this with study of historical documents from the period. The aim is to learn more about where the soldiers came from, their health and what illnesses they suffered from at different stages of their lives.

In autumn 2016 the research team also visited the USA to learn more about what became of those soldiers who, following imprisonment in Durham, were later transported to areas including Massachusetts and Maine, USA. These soldiers worked as indentured servants in ironworks and sawmills.

Once research on the remains is completed they will be reburied at the Elvet Hill Road Cemetery in Durham City, close to where the remains were originally found. The decision on where to rebury the remains was taken following extensive consultation and mindful of the University’s ethical, moral and legal responsibilities.

The Battle of Dunbar was one of the most brutal and short battles of the Seventeenth Century civil wars, after which thousands of soldiers were marched over 100 miles from the South East of Scotland to Durham in North East England. Around 3,000 soldiers were imprisoned in Durham Cathedral and Castle, at a time when the Cathedral was empty and abandoned.

Of those who survived imprisonment in Durham some were employed locally in coal mines, at salt pans and as weavers whilst others were sent to King’s Lynn to help with drainage projects on the Fens. Some soldiers were sent to France to fight or crossed the Atlantic to places such as Barbados and New England, USA, where they worked as indentured servants.

In 2018 Durham University will host an exhibition about the Scottish Soldiers and the archaeological research that has helped uncover their story. The exhibition entitled Bodies of Evidence: How Science Unearthed Durham’s Dark Secret will be held at the University’s Palace Green Library, which is part of the complex of buildings where the remains were found in 2013.

You can watch a video about the facial reconstruction process here.

You can also see a short 3D video of the facial reconstruction here.