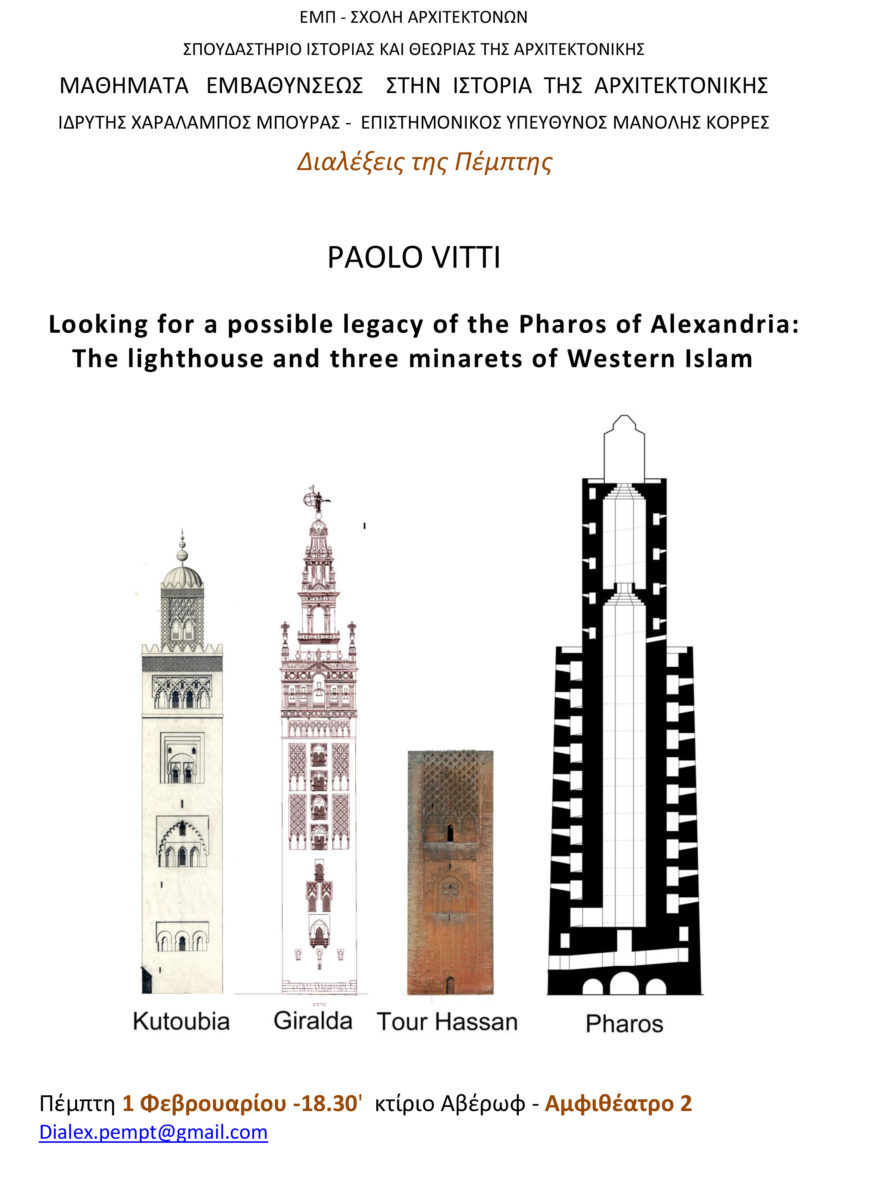 Looking for a possible legacy of the Pharos of Alexandria

Tomorrow, February 1, 2018, Paolo Vitti, Adjunct Professor Università Roma Tre, will give a lecture (in English) entitled “Looking for a possible legacy of the Pharos of Alexandria: The lighthouse and three minarets of Western Islam”. The lecture is part of a seminar series about the history of architecture organized by the School of Architecture of the National Technical University of Athens.

The visual and emotional impact of the Alexandria lighthouse can only be argued
from the admiration it raised for more than sixteen centuries. The gigantic construction
followed a trend of the Hellenistic leaders to invest on constructions of unprecedented
magnitude, to display their power. Architects tried to obtain the favours of kings
proposing challenging projects, as the one of Dinocrates for Mount Athos, and kings
were, obviously, interested to use their skills and ideas.

My lecture will be focused on technical aspects, scarcely discussed by scholars,
related to the construction of such a long lasting masterpiece as the Alexandria
lighthouse. The aim is to highlight the structural and construction concept which made
possible the achievement of this imposing and long lasting building (ca. 280 BC-ca 1320
AD).

Many scholars have attempted to compare the lighthouse to later towers, namely
minarets of the Middle Ages. Against a formal approach to the comparison between
this structures I will propose a structural comparison, taking as model three imposing
minarets (Koutoubia in Marrakesh, tour Hassan at Rabat, Giralda in Sivilla) built in the
western Islam at the same time travelers from Andalusia where describing very precisely
the lighthouse of Alexandria.

Against evidence is clear that minarets might have been inspired by Roman
lighthouses rather than to the Hellenistic dry-stone masonry tower of Alexandria.

Where and when: School of Architecture of the National Technical University of Athens, Averof Building (Amphitheatre 2), 42, Patision str., Athens; Thursday, February 1, 2018, 6.30 p.m.