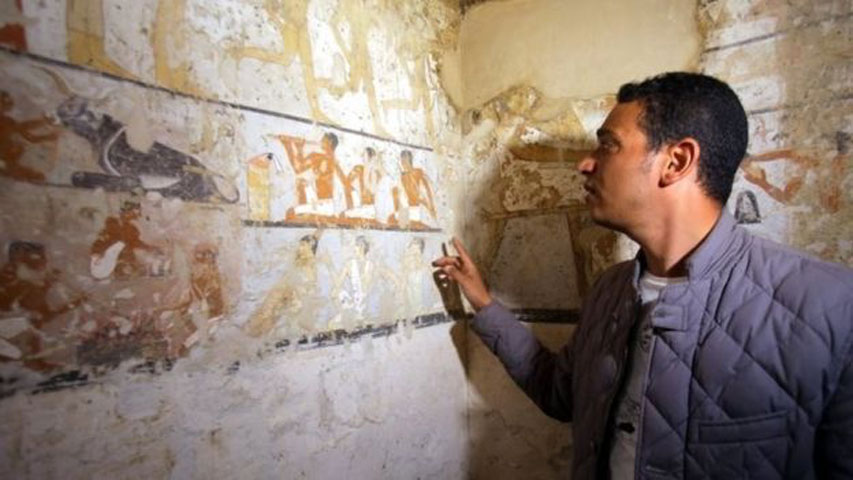 Archaeologists look inside the tomb of an ancient Egyptian priestess

With rare scenes of monkeys

Archaeologists have discovered a richly decorated tomb of the ancient Egyptian priestess Hetpet. The tomb is well-preserved and shows wall paintings depicting a variety of scenes with her. Apart from the archaeological significance the find offers a rare insight to the life of a high-ranking woman of the time.

Hetpet served as a priestess to the goddess of fertility, love, music, and dance Hathor. Throughout the long span of Pharaonic history, few of the already “few functional titles held by women (…) are as celebrated or as seemingly ubiquitous as the designation (…) ‘priestess (…) of Hathor’” (Robyn A. Gillam, “Priestesses of Hathor: Their Function, Decline and Disappearance”, Journal of the American Research Center in Egypt, vol. 32 (1995), pp. 211-237).

The tomb “has the architectural style and the decorative elements of the Fifth Dynasty, with an entrance leading to an ‘L’ shaped shrine,” according to the Ministry of Antiquities.

According to AFP, Hetpet’s name and titles are engraved on a purification basin in the interior of the tomb.

The wall paintings depict Hetpet standing in hunting and fishing scenes or receiving gifts from her children. There are also scenes showing people melting metal, making leather goods, and dancing.

Among the paintings some feature monkeys as domestic animals. One of the scenes shows a monkey dancing in front of an orchestra, another picking fruit and carrying a basket.

“Such scenes are rare… and have only been found previously in the (Old Kingdom) tomb of ‘Ka-Iber’ where a painting shows a monkey dancing in front of a guitarist not an orchestra,” Mostafa Waziri of the Supreme Council of Antiquities, told AFP news agency.

Excavations will be continued at the site, which is located about 12 miles south of Cairo, in the hope of further discoveries.