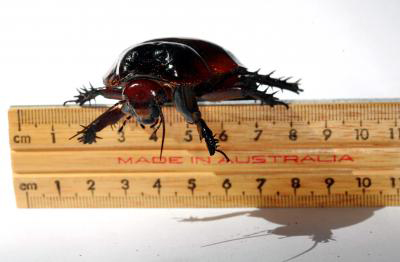 By research team from the Okinawa Institute of Science & Technology

A research team from the Okinawa Institute of Science & Technology has carried out the first molecular dating on cockroaches in order to map their biogeographical and evolutionary history.

They traced key evolutionary points in time, stretching coakroach ancestry almost 300 million years ago to the late Paleozoic period. Earth’s surface at this period was an assemblage of continental units that had amassed the supercontinent of Pangea.

Pangaea begun to break up by Early-Middle Jurassic, when the supercontinent began to rift from the Tethys Ocean in the east to the Pacific in the west.

The fossil record of cockroaches suggests that most extant families evolved during the breakup and prior to the beginning of continental separation within Gondwana (Between 200-135 million years ago).

Team Leader Dr. Thomas Bourguignon said: “Our results indicate that extant cockroach families have evolved over periods of up to ~180 million years.”

“Through reconstructions of the ancestral distribution of cockroaches using the known distributions of extant genera sampled in this study, we found evidence that continental breakup has had important impacts on cockroach biogeography.”

The team also estimated divergence times of all extant cockroach families from the mitochondrial genomes in 119 species. Their estimations indicated that the last common ancestor for cockroaches appeared much earlier than fossil evidence, around 235 million years ago.

The study has indicated the importance that vicariance played in the shaping of insect distribution and provides a new method for cockroach biographical research.