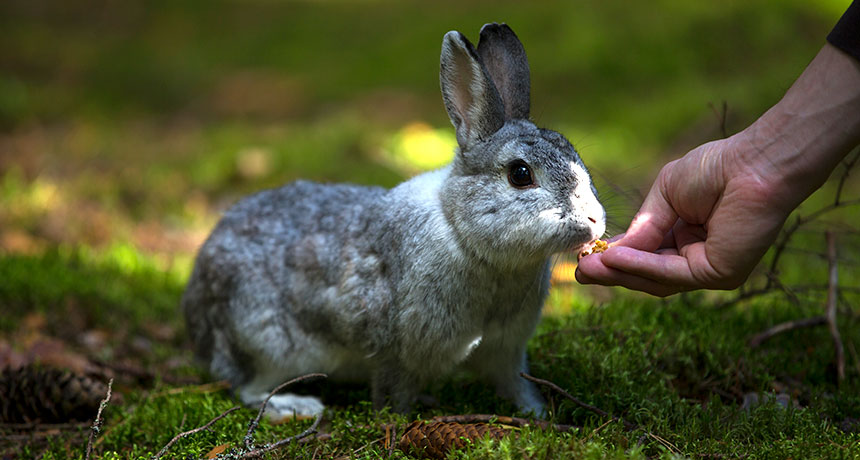 What fluffy bunnies can tell us about domestication

It didn't go the way you think

It turns out that nobody knows when rabbits were domesticated. Despite a well-cited story of the domestic bunny’s origins, a review published on February 14 in Trends in Ecology and Evolution finds that historical and archaeological records and genetic methods all suggest different timeframes for its domestication. But the researchers involved in the study don’t think this puzzle is a dead end. Instead, they believe it’s an indication that domestication happens on a continuum.

The story goes like this: rabbits were domesticated by monks in 600 AD after an edict from Pope Gregory declared that it was acceptable to eat fetal rabbits, known as laurices, during Lent. The problem is it isn’t true—something that archaeologists Evan Irving-Pease and Greger Larson of the University of Oxford accidentally discovered while trying to test how well the molecular clock method works for genetically dating domestication.

This method compares the genomes of a domestic rabbit and a modern wild one to determine how long it took for them to diverge. Larson hoped to match the domestication date indicated by the rabbits’ genomes to the date suggested by the historical record: 600 AD. But the molecular clock method indicated a date during the last ice age, before the very first domesticated animals.

His team’s analysis of these results suggested that the wild rabbits they used simply don’t share a recent ancestor with the domestic ones we know and love. But archaeological records, which look for changes in the skeletal structure of the domesticated rabbit, point to the 17th or 18th century, when modern pet-keeping began. And upon closer examination of historical records, the 600 AD story of the laurices fell apart.

“I had cited it, colleagues of mine had cited it, it’s all over Wikipedia, it’s all over the web… but it turns out that the modern story is a complete house of cards,” Larson says. “What was really interesting to me then was why nobody’s really thought about it or been critical about it.”

He thinks it has to do with the way we tell stories. “We really have trouble appreciating slow, continuous change over long periods of time,” Larson says, even though that’s how most change happens. “Our narrative structures work much better if you have a eureka moment.” Domestication that happens at a specific moment in time, due to a concrete series of events, makes intuitive sense to us.

But in the case of rabbits, Irving-Pease, Larson, and colleagues suggest in the paper, domestication is more likely the cumulative effect of hunting rabbits during the Paleolithic era, keeping them in Roman and medieval enclosures, moving them from place to place, and eventually breeding them as pets. “For the vast majority of human existence, no one said, ‘I am going to grab this wild organism and bring it into captivity and, voila, I will create a domestic one,'” Larson says. “If you want to divide the continuum into a dichotomy of wild and domestic, you can do that, but you have to know that it’s necessarily going to be arbitrary.”

Rather than asking when domestication occurred, Larson believes we need to reconsider what domestication is and whether humans have ever really intended to cause it. His team’s next step will be to reexamine the domestication of other plants and animals our civilization relies upon. “We have been slightly arrogant,” says Irving-Pease. “We know a hell of a lot less about the origins of the things that matter most to us than we think we do.”