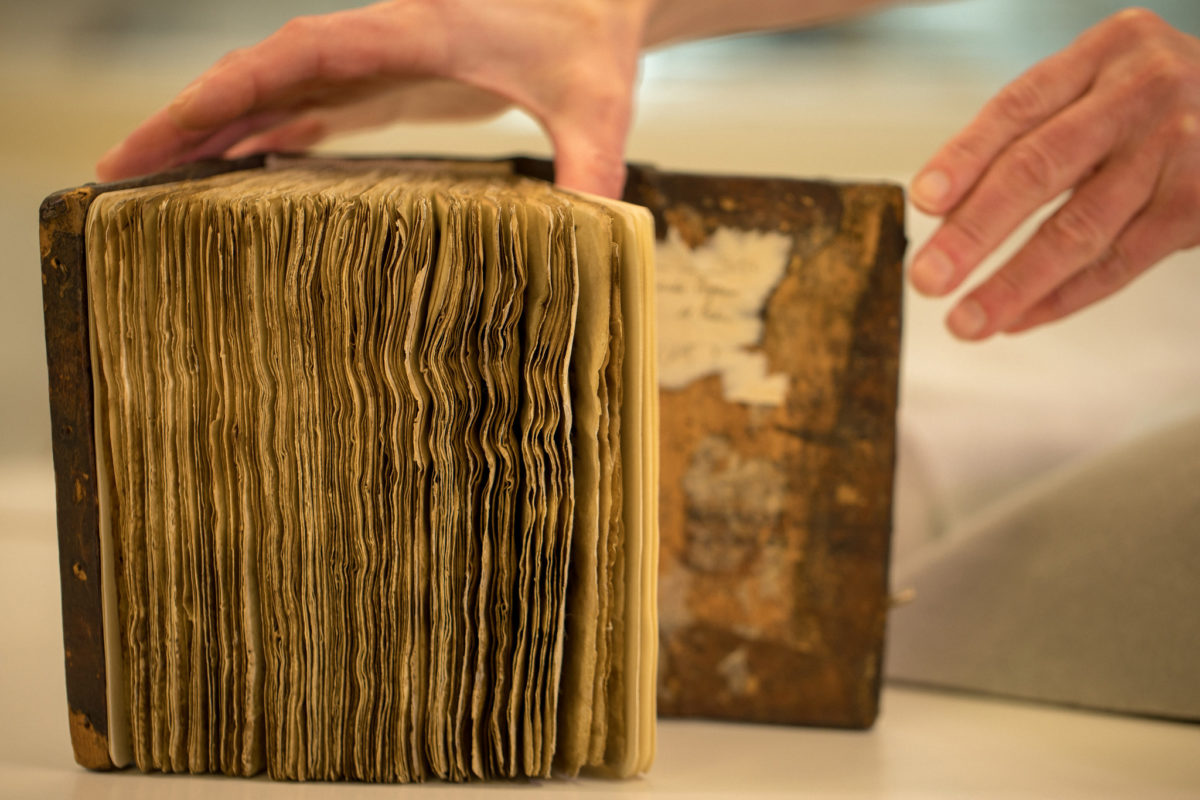 By the Greek-Roman doctor Galen

With X-ray imaging at SLAC’s synchrotron, scientists uncovered a 6th century translation of a book by the Greek-Roman doctor Galen. The words had been scraped off the parchment manuscript and written over with hymns in the 11th century.

An influential physician and a philosopher of early Western medicine, Galen of Pergamon was the doctor of emperors and gladiators. One of his many works, “On the Mixtures and Powers of Simple Drugs,” was an important pharmaceutical text that would help educate fellow Greek-Roman doctors.

The text was translated during the 6th century into Syriac, a language that served as a bridge between Greek and Arabic and helped spread Galen’s ideas into the ancient Islamic world. But despite the physician’s fame, the most complete surviving version of the translated manuscript was erased and written over with hymns in the 11th century – a common practice at the time. These written-over documents are known as palimpsests.

An international team of researchers is getting a clear look at the hidden text of the Syriac Galen Palimpsest with an X-ray study at the Stanford Synchrotron Radiation Lightsource (SSRL) at the Department of Energy’s SLAC National Accelerator Laboratory.

The early results reveal more of the original words in the underlying text, which runs perpendicular to the direction of the overlying text, enabling scholars to see more information from Galen.

“Our hope was that there would be enough traces of ink there so that we would be able to decipher even a word or two,” says Uwe Bergmann, a distinguished staff scientist at the Stanford PULSE Institute at SLAC, who led the X-ray imaging project. “The distinct writing that we can now see marks a tremendous success.”

For nearly a decade, a multidisciplinary team of scientists and scholars has tried to uncover and study Galen’s original text with advanced imaging and digital processing techniques. Each leaf of the manuscript provides clues about the state of medical knowledge at that particular time in the Middle East.

“If you want to understand medicine in the Middle East, you have to look at the translation and transmission of knowledge,” says Peter E. Pormann, professor of classics and Graeco-Arabic studies at the University of Manchester. “This is a huge chunk of history, and we hope this text will help us understand how they managed and treated disease historically in that part of the world.”

The section of the manuscript being examined at SLAC first appeared in Germany in the early 1900s, and ongoing research indicates it was originally from St. Catherine’s Monastery on the Sinai Peninsula. All the pages being scanned at SSRL will be converted to high-resolution digital images that will be added to those made freely available online by Schoenberg Institute for Manuscript Studies at the University of Pennsylvania Libraries.

A few leaves of the original Syriac manuscript had been removed and ended up at libraries around Africa, Europe and the United States, including those at Harvard University, Paris, the Sinai Peninsula and the Vatican. These were imaged at each location with specialized cameras, and each institution agreed to have their images added to the online data set.

“Our plan is to digitally reunite the book,” says Michael Toth, president of R.B. Toth Associates, a private company specializing in cultural heritage research that has led the study of this palimpsest since 2009. “This will provide public access to scholarship that’s been hidden for centuries.”

To recycle the limited material available for parchment, 11th-century scribes scrubbed and replaced the original text with layers of calcium, a rudimentary form of white-out, and then wrote a book of psalms on top of the original text. Earlier studies had revealed traces of the text beneath the hymns, but it was difficult to read the original translation of Galen – both texts were written in similar ink and the underlying text had been well-scrubbed.

Before starting the synchrotron work, the team feared that even with the powerful X-ray imaging techniques at SSRL, the text could still be illegible if the amount of iron in the remaining ink was too small or the ink was too smeared. Initial X-ray analysis of the inks in the bound book highlighted the difficulty of the task ahead, with only a faint response from the underlying text.

Because of the delicate nature of the old manuscript, the Stanford University Libraries Preservation Departmentcarefully prepared the pages for X-ray imaging.

“One of the most powerful parts of this type of analysis is that you don’t have to interrupt the overlying text. You can see underneath the surface without any damage to the manuscript,” says Kristen St. John, head of conservation services at Stanford University Libraries. “You don’t have to jeopardize one part of the document to learn about the other.”

The Stanford conservators separated the leaves of the ancient leather-bound book, and mounted each page in a custom mat. The mats then fit precisely into an aluminum frame mounted on a computer-controlled stage for scanning at the synchrotron.

“In order to safely image the manuscript here, we had to think of a special way to mount it,” says Sam Webb, a staff scientist at SSRL. “Usually, we just secure our samples with tape or screws. You can’t exactly do that with a thousand-year-old manuscript.”

Prior to the manuscript arriving at Stanford and SLAC, the research team had attempted to see differences in the overlying and underlying inks with a technique called multispectral imaging. They illuminated the pages with visible, ultraviolet and infrared light to enhance different colors within the inks. While they could identify and read the underlying text on many pages, they still could not read it on others.

This latest study applied an updated verson of a complementary imaging technique, X-ray fluorescence (XRF), that the team had developed earlier to decipher hidden mathematical theories in a copy of a work by Archimedes that had also been written over, with forged paintings added on top of the text of four pages.

With the XRF technique, the synchrotron X-rays knock out electrons close to the nuclei of metal atoms, and these holes are filled with outer electrons resulting in characteristic X-ray fluorescence that can be picked up by a sensitive detector.

These fluorescent X-rays can penetrate through layers of text and calcium, and the hidden Galen text and the newer religious text fluoresce in slightly different ways because their inks contain different combinations of metals such as iron, zinc, mercury and copper.

“We’re also interested in the background composition of the parchment and the calcium that covers the original text,” says Nicholas Edwards, a research associate at SSRL. “That additional information may allow us to distinguish between the layers of the text.”

Digitally sifting through layers of ink

For the Galen document, a scan takes about 10 hours for each of the 26 pages. The experiment has collected vast amounts of nuanced data from the X-ray scans, and the researchers are now applying data processing tools, including machine learning, to pull out the information they seek.

“Hidden in all this data, there’s information trying to get out,” says William Sellers, an expert in data processing and the director of the University of Manchester’s zoology department. “And there’s just too much data for humans alone to sift through.”

Sellers developed algorithms that train a computer to recognize different parts of the manuscript. The data mining results in colorized images of the layers of text and parchment that scholars and conservators can examine.

“As a conservator, this is an interesting opportunity to work with an entirely different array of analytical tools that we do not typically have access to in the day-to-day work of conservation,” St. John says. “It helps us learn what’s possible in our field, as we better understand the materials we work with.”

Once the scans are complete, the team will continue to analyze the words of Galen in these new views of the timeworn document.

SSRL is a DOE Office of Science user facility. The collaboration also includes researchers from Exeter University, Equipoise Imaging and University of Pennsylvania. Parts of this work were funded by the owner of the Syriac Galen Palimpsest. It also received funding from the Arts and Humanities Research Council and the University of Manchester Research Institute in the United Kingdom.