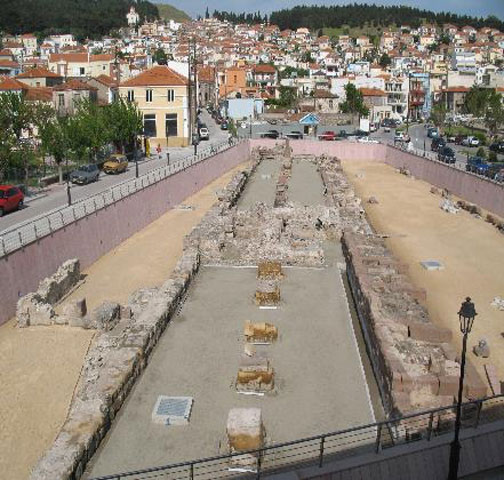 During a rescue excavation

Part of Mytilene’s ancient fortification sea wall was discovered during a rescue excavation on a plot of land in the ancient northern port of Mytilene, today’s Epano Skala, at the intersection of Naumachias and Kioutachia streets.

It is part of a wall of the 3rd century BC, constructed of massive ashlar blocks of local stone with obvious repairs, according to archaeologists, from Roman times.

A section of the wall has also been found on the archaeological site of the ancient commercial stoa of Hellenistic times, once again in the district of Epano Skala, forming the stoa’s long northern side. Both wall and stoa were constructed of local stone found in the region.

Moreover, years ago, while laying pipes for the town’s waste recycling plant, the end of the wall on the jetty of Mytilene’s ancient Euripos was found on Naumachias Ellis Str., which has subsequently been buried.

According to sources of the archaeological service, this is a significant find regarding the history of ancient Mytilene and the town’s topography 2,000 years ago. The excavation will continue.