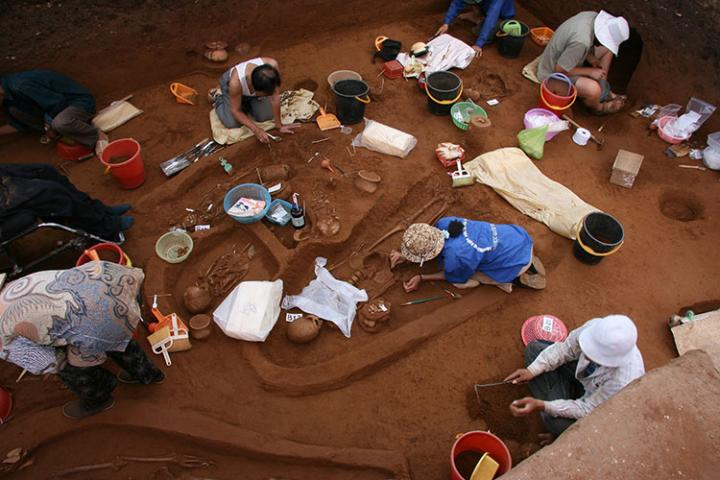 The first whole-genome analyses of ancient human DNA from Southeast Asia reveal that there were at least three major waves of human migration into the region over the last 50,000 years.

The research, published online May 17 in Science, complements what is known from archaeological, historical and linguistic studies of Southeast Asia, defined as the area east of India and south of China.

The work illuminates another critical portion of the story of ancient population dynamics around the world, joining numerous ancient-DNA studies of Europe as well as burgeoning research from the Near East, Central Asia, Pacific Islands and Africa.

“A very important part of the world is now accessible for ancient DNA analysis,” said Mark Lipson, a postdoctoral fellow in the lab of ancient-DNA specialist David Reich at Harvard Medical School and first author of the study. “It opens a window into the genetic origins of the people who lived there in the past and those who live there now.”

An international team led by researchers at HMS and the University of Vienna extracted and analyzed DNA from the remains of 18 people who lived between about 4,100 and 1,700 years ago in what are now Vietnam, Thailand, Myanmar and Cambodia.

The team found that the first migration took place about 45,000 years ago, bringing in people who became hunter-gatherers.

Then, during the Neolithic Period, around 4,500 years ago, there was a large-scale influx of people from China who introduced farming practices to Southeast Asia and mixed with the local hunter-gatherers.

People today with this ancestry mix tend to speak Austroasiatic languages, leading the researchers to propose that the farmers who came from the north were early Austroasiatic speakers.

“This study reveals a complex interplay between archaeology, genetics and language, which is critical for understanding the history of Southeast Asian populations,” said co-senior author Ron Pinhasi of the University of Vienna.

The research revealed that subsequent waves of migration during the Bronze Age, again from China, arrived in Myanmar by about 3,000 years ago, in Vietnam by 2,000 years ago and in Thailand within the last 1,000 years. These movements introduced ancestry types that are today associated with speakers of different languages.

The identification of three ancestral populations–hunter-gatherers, first farmers and Bronze Age migrants–echoes a pattern first uncovered in ancient DNA studies of Europeans, but with at least one major difference: Much of the ancestral diversity in Europe has faded over time as populations mingled, while Southeast Asian populations have retained far more variation.

“People who are nearly direct descendants of each of the three source populations are still living in the region today, including people with significant hunter-gatherer ancestry who live in Thailand, Malaysia, the Philippines and the Andaman Islands,” said Reich, professor of genetics at HMS and co-senior author of the study. “Whereas in Europe, no one living today has more than a small fraction of ancestry from the European hunter-gatherers.”

Reich hypothesizes that the high diversity of Southeast Asia today can be partly explained by the fact that farmers arrived much more recently than in Europe–around 4,500 years ago compared with 8,000 years ago–leaving less time for populations to mix and genetic variation to even out.

The new findings make it clear that the multiple waves of migration, each of which occurred during a key transition period of Southeast Asian history, shaped the genetics of the region to a remarkable extent.

“The major population turnover that came with the arrival of farmers is unsurprising, but the magnitudes of replacement during the Bronze Age are much higher than many people would have guessed,” said Reich.

Also unexpected were the linguistic implications raised by analyses of the ancestry of people in western Indonesia.

Additional samples from western Indonesia before and after 4,000 years ago should settle the question, Reich said.