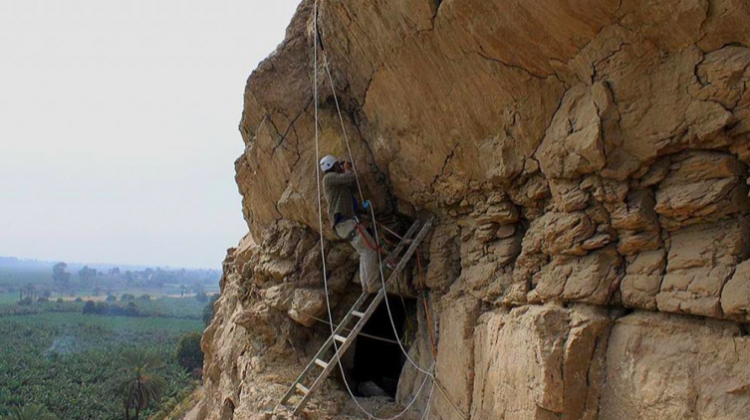 Polish scientists discovered dozens of previously unknown hieroglyphic inscriptions on the rocks near the temple of Hathor at Gebelein, Southern Egypt. The inscriptions containing prayers to deities had been made by pilgrims or priests, the researchers say.

“The temple scribe Senebiu adores Hathor Lady of Gebelein”, reads one of the inscriptions discovered by a team of Polish scientists working at Gebelein. Like a few dozen others, it was engraved on a rock surface near the 3500 years old rock-cut chapel of the goddess Hathor.

“Inscriptions discovered by our mission are an invaluable source for research on popular religious beliefs. We know Egyptian beliefs primarily from official texts from monumental temples and tombs, made for royals and elite members”, told PAP the director of the Polish expedition working at Gebelein, Wojciech Ejsmond, PhD student at the Antiquity of Southeastern Europe Research Center of the University of Warsaw. Until now, only very small part of these inscriptions from Gebelein has been barely mentioned by other researchers.

Researchers emphasise that working conditions were extremely difficult, because access to many inscriptions is almost impossible — they are located in such places on the rocks that they are often impossible to see without the use of camera booms or climbing equipment. This is because the shape of the hill has changed significantly over the last few thousand years.

Translation made by Egyptologist Dawid F. Wieczorek shows that the discovered engravings are primarily short religious inscriptions, in which the scribes worship deities. Some could be created on the various occasions, for example religious festivals. The inscriptions were made approx. from 1770 to 1400 BC, that is from late Middle Kingdom to the beginning of the New Kingdom.

According to Wieczorek, they were probably left by local priests, pilgrims or people associated with several temples in the area. Hathor was worshiped in the nearest temple, and Anubis and Sobek in the other places in the region. Signatures are visible in some of the inscriptions, allowing the researchers to learn the names of ancient scribes — for example Senebiu. The inscriptions were made with two techniques: they were engraved or engraved and painted.

Previously unknown inscriptions have been found near the rock temple studied in recent years by a team led by Wojciech Ejsmond. This place was known to the local community, but until now no archaeologist has conducted research there. Polish researchers determined that the temple was founded during the reign of Hatshepsut, 3000 years ago, and that it was dedicated to goddess Hathor.

NOTES
1. Science and Scholarhip in Poland