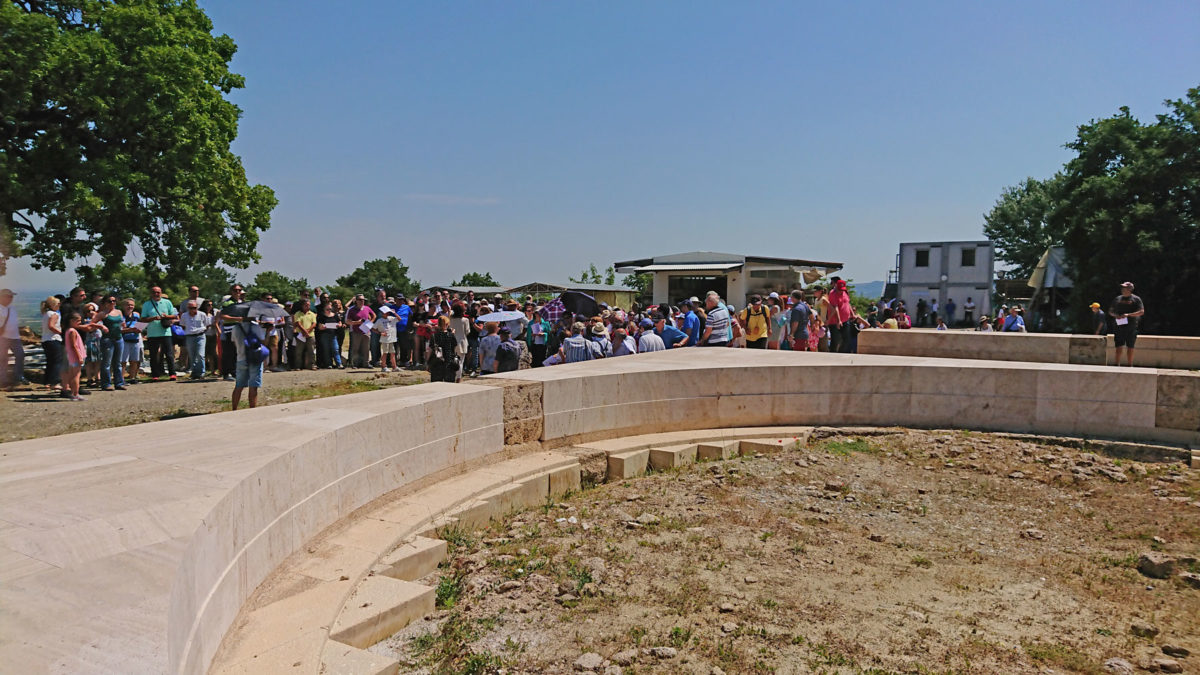 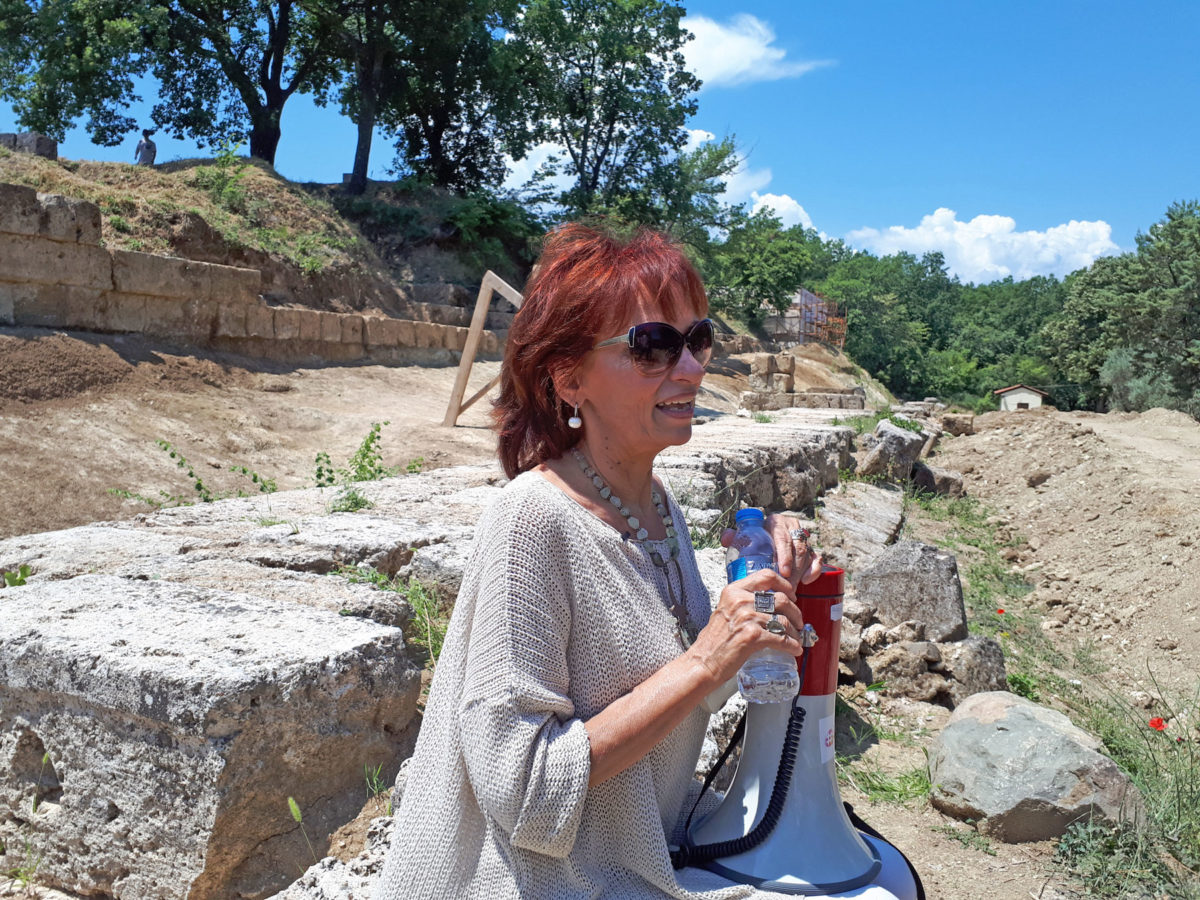 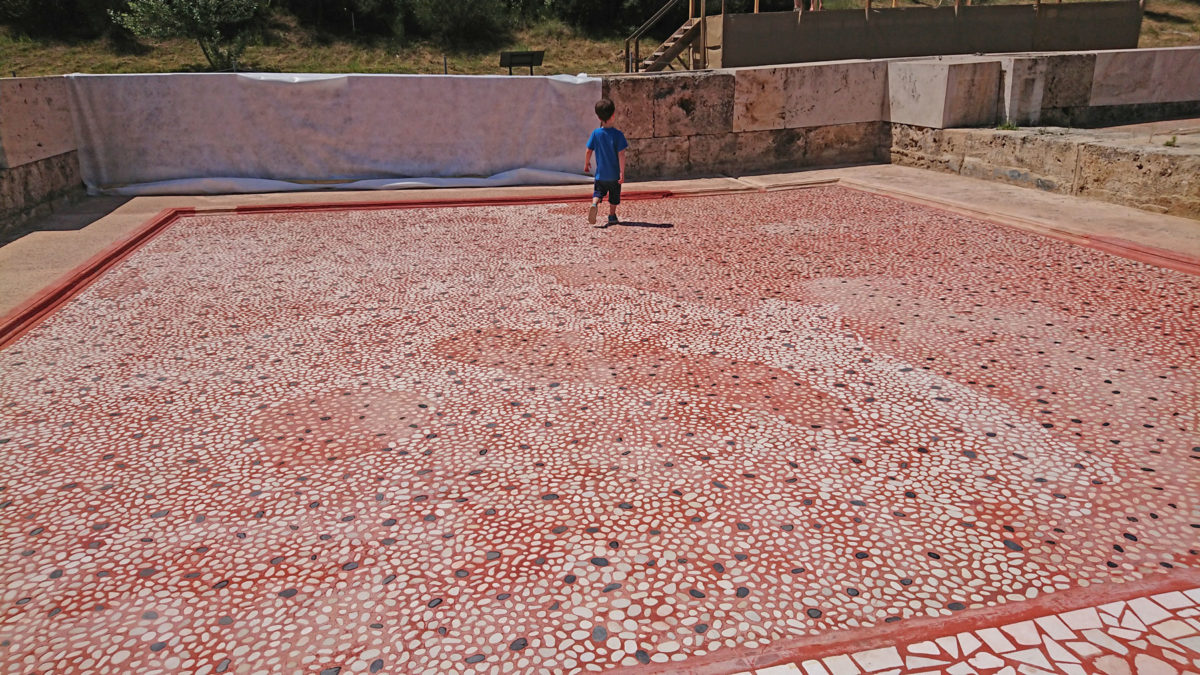 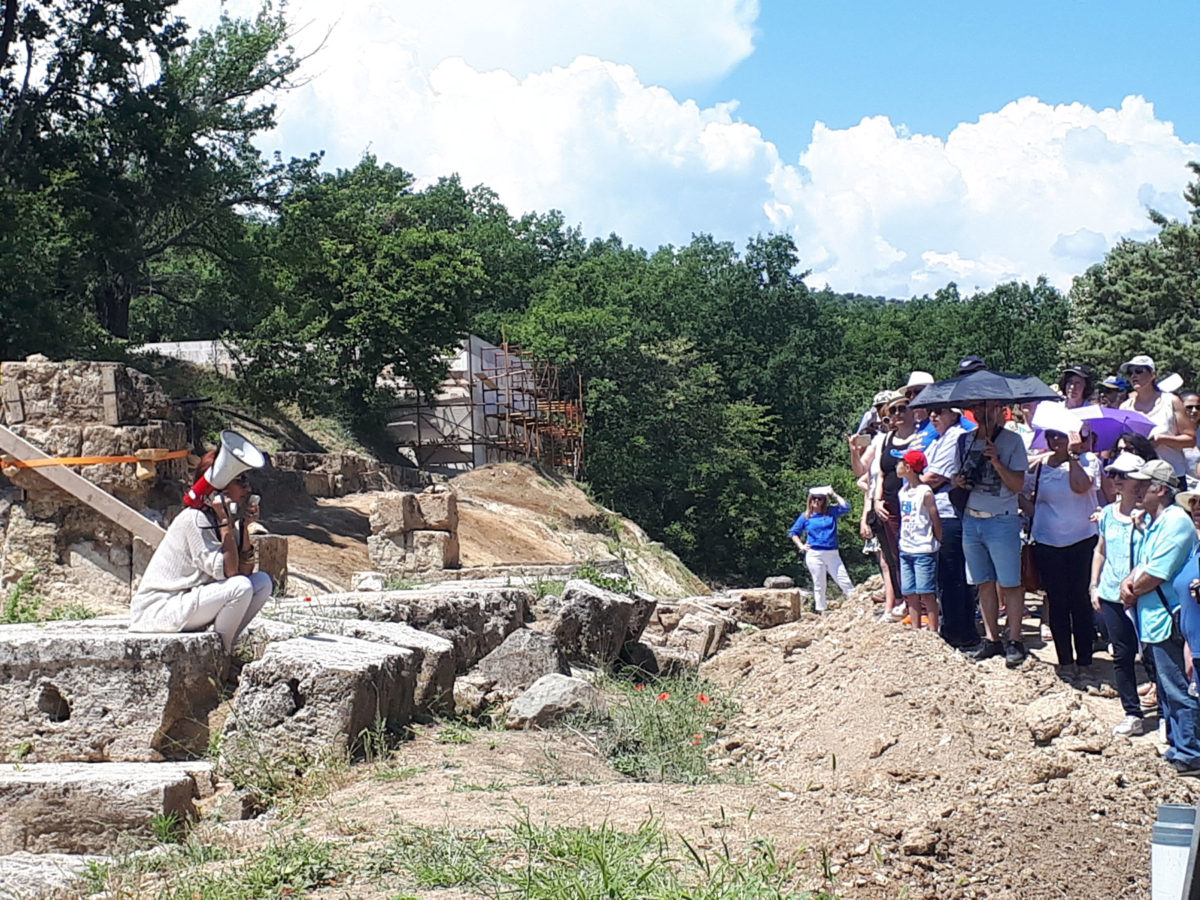 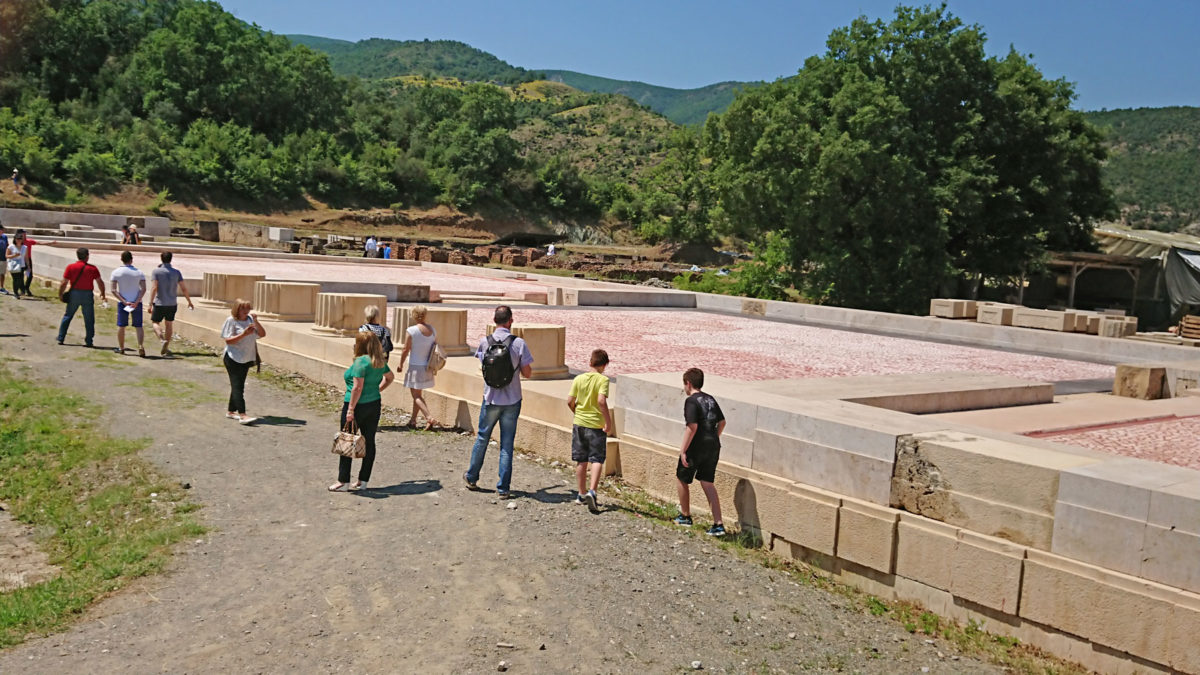 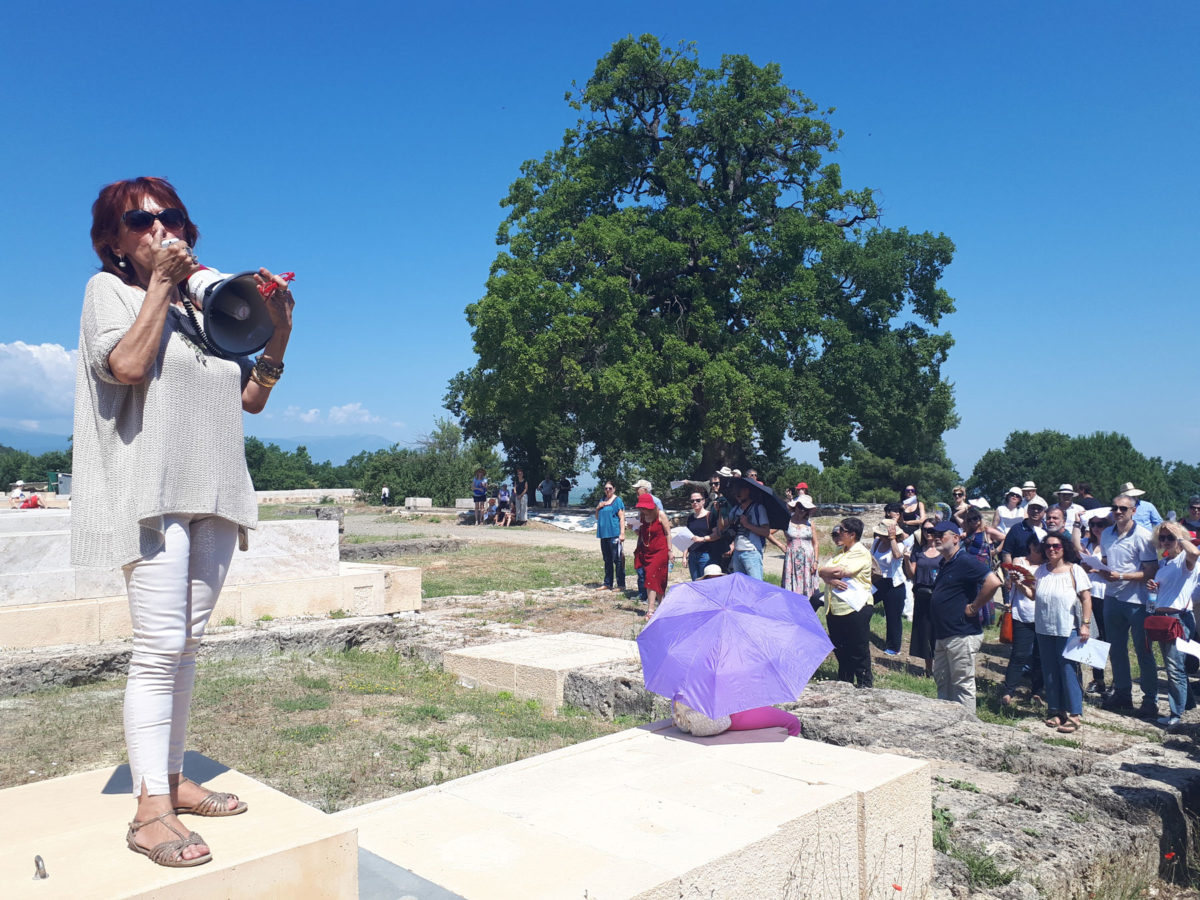 The concept of an enlightened sovereign in the palace of Aigai

The palace is now open to the public

“I the sovereign and my world coexist in this building, the palace of Aigai″. With this sentence, archaeologist Angeliki Kottaridi, Director of the Ephorate of Antiquities of Imathia, explained to the public the idea of enlightened sovereignty, a concept of the Macedonian King Philip II, father of Alexander the Great, which led him to create the city and the palace.

In the first official guided tour on the site of the palace of Aigai, so as to mark its opening to the public, Mrs Kottaridi stressed meaningfully that “this is not a house, it was never a house”, adding that it was “the centre of political, religious, judicial and military power” of Philip II. He was, moreover, according to the beliefs of the times, of divine origin. Taking the institutions of the southern cities, i.e. the self governed city with a Boule and a Demos, he grafted them onto the concept of the kingdom. Thus he started to form cities where populations gathered and plots of land were allocated. Philip himself was a father to his people. He went into battle on horseback to protect them and provided them with vital space to exist and develop.

In this context, the palace functioned as a political agora. It was a structured civil building, the centre of religious power, an architectural creation conceived by a genius. It was intended to host meetings of civilians and grandiose public symposiums/banquets with hundreds of individuals, not just to eat and drink but to engage in discussions since the symposium was a basic political function. There, the people of those times watered down their wine so as to be clearheaded and able to deal with all philosophical matters.

An innovation of this magnificent building that dates precisely from between 350 and 340 BC were the two storied, functional galleries. “Essentially they were the predecessors of the Attalos Stoa in Athens” Mrs Kottaridi pointed out. Going on to outline important historical moments that had taken place there, she remarked, among other things, that the first big group of visitors arrived at the palace in 336 BC on the ancient Macedonians’ New Year, when Philip celebrated the wedding of his daughter Cleopatra. A little further down, in the theatre that is part of the palace, he himself was later murdered by Pausanias, while in the palace peristyle Alexander was declared king by the Macedonians who beat their shields against their chest with a spear, shouting out his name.

The palace is open to the public

Crowds of people participated in a thorough guided tour conducted by the Director of the Ephorate of Antiquities of Imathia of the palace of Philip II that opened to the public. People of all ages walked an uphill route of two kilometres under the hot sun to take part in the event, also attended by the Secretary General of the Ministry of Culture and Sports, Maria Andreadaki-Vlazaki.

“We are standing on a spot that, without exaggeration, has marked the course of modern civilization. This is something that we archaeologists have been convinced about, but I think that gradually all the world also believes it”, said Mrs Vlazaki. She herself described the consigning of the monument to the world as a historical moment, not because it has been completed, as she said, but for the public to be able to visit its restored part, to talk to the people involved in its completion and to follow the progress of the works.

“Along with the completion of the museum, which will be equipped with the latest technology, one will really have a complete picture of what Aigai must have been, what Philip was like, and who Alexander was and is”, she added. The schedule, moreover, expects the new museum of Aigai to start functioning in 2020 and the palace’s restoration to be completed in 2022.

“It is a thrilling experience. Figuring out the monument was by far the most amazing thing I have done. When you confront such works it is then that you feel it is worth living” said Mrs Kottaridi to the Athens and Macedonian News Agency, having completed the guided tour with the public. She pointed out that from the start of operations on the monument, the archaeological research had reached conclusions and now it is certain that it is a work of Philip’s, the first of its kind, which has not been modified over time and is an important monument for an understanding of the history of architecture.

“On the other hand there are tremendous difficulties which I do not allow myself to be completely aware of. It is an extremely difficult project; The scale of it, the need to train people, problems of bureaucracy, changes in legislation, the difficulties in recruiting, the challenges of finding qualified personnel, the extremely lengthy procurement procedures” she said.

Answering the question about all that has happened since the discovery of Philip’s tomb, from Manolis Andronikos till today, she commented that “from then till now a cosmogony has taken place” and called on the public itself to find out at first hand what has happened.