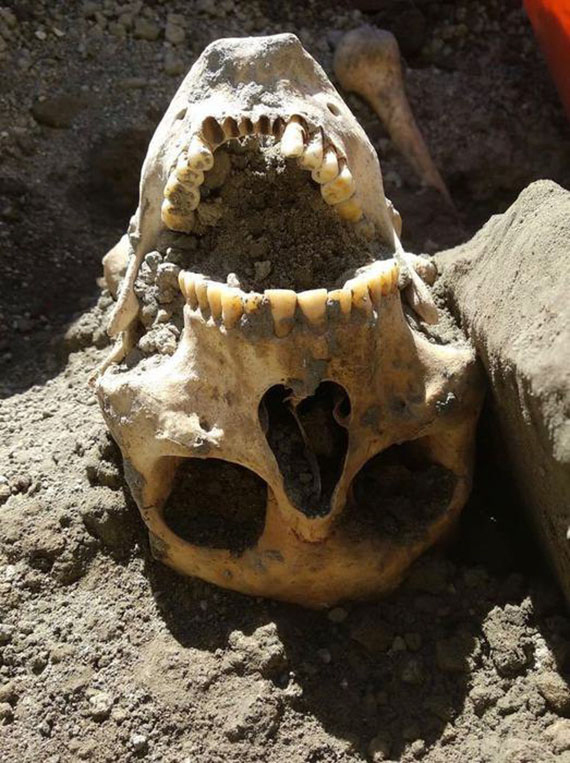 Pompeii: Head of the fugitive discovered

At the site of the new excavations of Regio V

The skull of the fugitive has been found. He was the first victim to have been discovered at the site of the new excavations of Regio V, only a part of whose skeleton had been found.

In the early phase of the excavation it appeared that the upper part of the thorax and the skull, which had not yet been found, had been severed and dragged downwards by a stone block which had struck the victim: this preliminary hypothesis arose from the observation of the position of the boulder compared to the empty space of the body impressed into the cinerite.

The progressing investigations into the crossroads of Vicolo delle Nozze d’Argento and Vicolo dei Balconi, where the first skeletal remains were found, have brought the upper part of the body to light, which was located somewhat lower than the lower limbs.

The explanation for this stratigraphic anomaly is to be found in the presence of a tunnel, below the lying position of the body and presumably dating to the Bourbon era, whose caving in led to the slippage and collapse of part of the upper stratigraphy, but not of the stone block, which is still located in the original stratigraphy.

His death was presumably not, therefore, due to the impact of the stone block, as initially assumed, but likely to asphyxia caused by the pyroclastic flow. The identified skeletal remains consist of the upper part of the thorax, the upper limbs, the skull and jaw. Currently undergoing analysis, they display some fractures, the nature of which will be identified, so as to be able to reconstruct the final moments in the life of the man with greater accuracy.