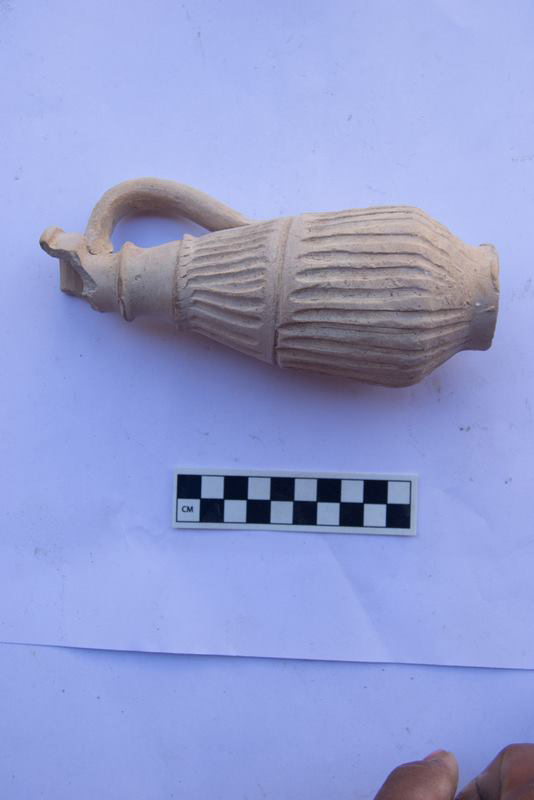 A cache of pottery vessels found in Alexandria

Dating back to the Graeco-Roman, Coptic and the Islamic eras

The Ministry of Antiquities found a cachette containing hundreds of pottery vessels, dating back to the Graeco-Roman, Coptic and the Islamic eras, during restoration works carried out in the inner garden of the Graeco-Roman museum in Alexandria known as the “Patio”. Dr. Mostafa Waziri, General Secretary of the Supreme Council of Antiquities, said
that after finding the cachette, a committee from the Alexandria Antiquities headed to the museum to archaeologically inspect the cachette.

According to the history of the Museum, Ayman Ashmawi, head of the Egyptian Antiquities Sector pointed out  that these pots were most probably hidden by archaeologist Alan Rowe and the museum’s employees in the garden of the museum’s garden during
the World War II, between 1939 and 1945, to safeguard and protect them from looting or being destroyed by repeated bombardments during the war. But, the hiding process was
carried out quickly without being documented or recorded on the museum’s list.

On her part, Nadia Khadre, Head of the Central Department of Egyptian, Graeco and Roman Antiquities, said that the cachette includes a collection of pottery of different sizes and shapes. Among them, the Hadra vessels, to bury the ashes of dead people after burning their corpses in the Greek period.

In addition to a large collection of liquid vessels of various shapes and sizes, colored pots, and a large number of dishes and tableware from the Graeco-Roman and Byzantine eras were found.